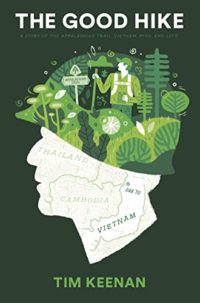 It took Vietnam Veteran Tim Keenan 172 days to hike the legendary Appalachian Trail. Apart from wanting to test his athletic abilities, he hoped to get some relief for his post-traumatic-stress-syndrome (PTSD).

For Keenan, the unforeseen consequences of firing a rifle started with shooting a small bird with a BB gun when he was a boy. He recalls being excited about shooting a living creature, but had no idea how lousy he’d feel after doing it. Those feelings of anxiety and regret intensified later while in Vietnam combat zones and haunted him throughout his life, especially when he stepped into a forest. He hoped a long and rugged walk in nature without a gun would bring him peace of mind.

His book takes readers on a two-part journey through the mountains and valleys of fourteen states nearly 2,200 miles long. The first part is the reflections of a war-weary soldier remembering and confronting the things he felt and did in Vietnam. The other, a travelogue of day-to-day personal hardships and accomplishments, interlaced with descriptions of pristine environments and conversations between hikers he meets with quirky names such as Prairie Dog, Mij (Made in Japan) and Angry Beaver.

The book is full of surprises and written from the heart by a writer who never missed a day along the trail putting his thoughts down on paper. His writing is extemporaneous and flighty, so he can jump from describing a surprise encounter with a moose to recalling a monkey touching his backside when he was on guard duty.

His parallels between hiking activity and combat experiences are frequent, and there’s no guessing when a scent or situation will trigger a past event. One paragraph he’ll be talking about the goodwill of strangers (Trail Angels) leaving cold Gatorade for hikers in Virginia, and perhaps a few pages later, he’ll recall the camaraderie he felt with fellow soldiers near the Cambodian border.

Other times, he goes deeper. When a hiking situation clashes with a combat flashback and busts loose an old memory, a catalyst that can lead to examining the stubborn fact that comparing and contrasting things can only take you so far. Breaking camp in freezing New England rain might be compared with walking through spiderwebs and inhaling Asian bugs. Or, drinking beer in the jungle with army buddies can be likened to smoking dope out of a motel vaporizer with fellow hikers; some things may be incomparable or never understood.

Combat troops, for instance, may never figure out why a high-ranking officer would tell his own soldiers to keep risking their lives taking hill-after-hill knowing full well the war they’re fighting is un-winnable. A despicable war-game like this can never have a satisfactory explanation. Other things need to be experienced on a personal level to be fully appreciated. Only Keenan knows if summiting a mountain above the tree line near the end of a long American trail feels as exhilarating as leaving the Vietnam bush for good in a helicopter.

Yet, the narrative doesn’t seem disjointed. His recollection of a tender embrace with his mother before leaving for Vietnam compliments his description of two wild animals frantically searching for each other when they’re temporarily separated by water. A vivid scene of wild ponies running free in the mountains seems emotionally equal to soldiers crying and throwing up in bunkers. He takes us through a wide range of high and low extremes without hyperbole or awkwardness.

Keenan’s honesty with confronting old demons is a reminder of how difficult it can be to look a scary secret in the eye: A shell-shocked medic who had to be screamed at to do his job. The new guy just off the chopper who was looking for combat action and shit his pants when he came under fire. All the soldiers who didn’t take their malaria pills hoping to get a week or two vacation in a hospital. Or for a soldier back in America who sees the enemy everywhere in a Vietnamese restaurant.

His odyssey is as much about a brutal excursion into the wilderness as it is about a tough inner journey where self-reflection and forgiveness are part of the essential gear. An education that lets an aging veteran know he doesn’t have to worry about camping on high ground to avoid ambushes anymore. He learns that it’s only the wind or a small animal moving through the trees

It’s been said that death is a journey that can be explored, but never fully charted. The author’s sojourn into wellness is much the same – a path without a clear endpoint where we get glimpses of a man healing himself – one chapter at a time.