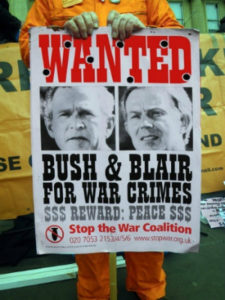 With anti-statist paranoia and acts of vandalism now part of the coronavirus crisis in the UK, in one outrageous video sent to me by a friend (I will not produce it, due to the responsibility to prevent the spread of false information) a British man denounced the virus as a hoax. What is most shocking is that he included (17 years on!) an appeal to the fact the Iraq War was based on lies.

The continued disbelief towards any government statements and guidance shows, despite attempts to put Tony Blair’s shame to rest or somehow apologize for his supposed mistakes, the grave injustice of the Iraq War has still not been resolved. Instead, the failure to punish Blair sent the message that deception and conspiracy are the rule rather than the exception for the statists, with Tony Blair only being an example of what the British state continues to be. The image of the craven, dishonourable, lying villain who once led the Labour Party has only grown more in people’s minds every year Blair continuously eluded punishment. Rulers believed they ruled over goldfishes, but the citizens have not forgotten anything. On the contrary, their suspicions have only grown to target ever more politicians.

It is the role of the state to calm the people, to possess agencies and departments that offer the most impartial and well-intentioned information. Throughout the handling of the coronavirus outbreak, there is no doubt that the British government has indeed been true to its word. Its guidance has been appropriate, its measures aimed genuinely to save the resources of the National Health Service. However, it is not enough to tell the truth sometimes. If the rages of the citizenry are to be appeased, the government must refrain from deception at all times. If it can’t, its downfall must be witnessed by that same citizenry or their distrust will only increase and their cooperation will decrease.

It is a fact that the British government has not sufficiently apologized for the 2003 War on Iraq, nor offered sufficient compensation to its victims. Its supposed investigation of the crime in the Chilcot Inquiry is considered to be a farce by anyone remotely interested in seeing the issue addressed properly. The criminals even continue to be celebrated and followed dearly by other politicians, and their criminal policy continues to remain in effect the policy of the state as the “war on terror” still fails again and again year after year, decade after decade, civilian death after civilian death. That continued trail of terrorism and destruction is, as far as Britain’s involvement is concerned, still the fault of Tony Blair and other staunch pro-US individuals in the British political scene.

The best way to put an end to the distrust towards the state, both at home and abroad, is to clean the stain of dishonour – to sacrifice our former great statesman for the greater good of stability and order. Clearly, as a man who took great leaps and risks in the interests of national security, Blair himself would be the first to support the proposition as follows. The appropriate solution has already been trialled by the British Parliament in the case of other citizens whose terrorism was undeniable. Tony Blair and the others of his former cabinet should be quickly stripped of British citizenship, deported to Iraq as terrorists, and forced to face justice in the courts in that country. Once this selfless sacrifice for our country clears up our image around the world and actually protects us (unlike the pointless loss of so many brave soldiers) Americans may be then inspired to deport George W. Bush and other selfless patriots who are so willing to give their lives for the cause of national security.

In the interests of long-term internal stability, there needs to be a proper acknowledgment by the British state that the 2003 War on Iraq was an unprecedented crime based entirely on lies and deceit, and its criminal perpetrators must be investigated by an appropriately empowered committee and brought to justice. As well as continuously infuriating Muslims across the world, our inexplicable failure to make Tony Blair pay the price has the potential to turn entire generations of British people against the state, as they view almost everything it says with suspicion.

Letting politicians lie with impunity and allowing them to wander freely for years afterwards is undoing centuries of accumulated trust in political institutions within only decades, and is far more damaging to society than allowing individual soldiers to get away with war crimes. It sets the state against the people in a way that is very difficult to resolve. In the end, it entails elevated risks to government employees and others forced to act on the front lines as the public face of liars despite also being victims of these liars. One cannot even deliver the most basic policies without facing constant distrust, and the constant and increasingly common refrain that the government is lying. Such distrust ultimately leads the government employees to sympathize more with the disgruntled citizenry and less with their employer, too, creating many hairline fractures running to the very foundations of what the state actually is.

At one point or another, it is the job of a state to be pragmatic. As with this virus, the state must take decisions that serve a greater order and a greater good, and not necessarily what is comforting. Tony Blair is not useful in the UK, and would be a useful agent for Britain’s safety if placed on trial in Iraq. Whatever the outcome, it would help protect the lives of all British people around the world, who would be at decreased risk of terrorist activity. It would help restore the trust British people have in their government, and would deflate wild and potentially harmful conspiracy theories. It would function as a genuine apology for what we did, and there would be no doubt that there are consequences for abusing one’s office to tell lies.

L’Ordre is a social critic and a friend of the former club of religious students known as the Mont Order. The Mont Order advocated global unity through cultural and religious reconciliation, before breaking up and continuing its campaigns through friendly organizations. You can reach L’Ordre at lordrenet@gmail.com Read other articles by L’Ordre.

This article was posted on Sunday, April 5th, 2020 at 8:59am and is filed under Disinformation, Iraq, Opinion, Statism, United Kingdom.