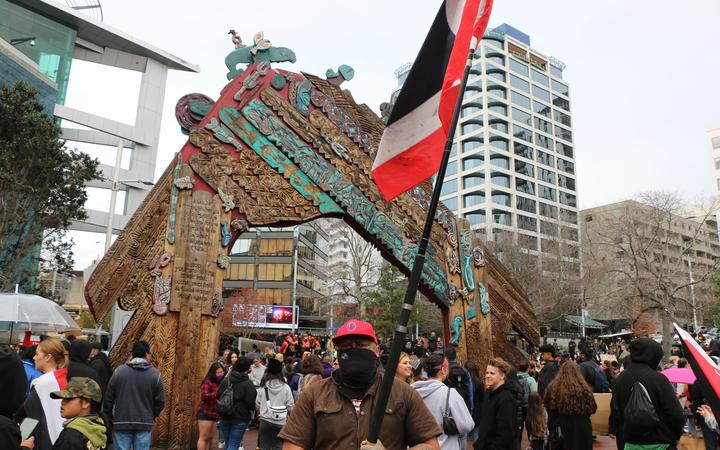 Thousands of New Zealanders have joined large numbers of Americans in protesting following the killing of Minneapolis man George Floyd.

In Auckland, Aotea Square overflowed yesterday with people before thousands marched down Queen Street towards the US consulate building.

Organisers said the aim was simple,”we want to put pressure on our government from the local level, right up to Prime Minister Jacinda Ardern to publicly condemn the acts of violence and state-sanctioned murder against African Americans in the United States”.

Protests have been held in more than 30 cities across the US and throughout the world after disturbing video surfaced showing bystanders pleading with a white police officer kneeling on the neck of George Floyd, a black man, as he gasped for breath.

Floyd died from the incident, the latest in a string of deaths of black men and women at the hands of US police.

Nigerian-Kiwi Mary Adeosun drove up from Hamilton for the protest.

She was in tears as she spoke to our reporter: “I really feel for my skin-folk, for the innocent lives that have been taken… I’m so far away in this country and I’m seeing people who look like me dying [in the US]”.

Hobson Hohepa flew his Tino Rangatiratanga flag high at the protest: “[Racism] happens here in our country. It happens to us. It happens to me. I’ve had enough.”

Ricky Wilkins is an African-American from Los Angeles, California. He has been living in New Zealand for the past seven months.

“I feel loved. Everybody wants to be us but no one wants to care for us. It’s just amazing to see in Aotearoa how people are representing and showing us love.”