Former President Barack Obama speaks on the stage as he attends an Obama Foundation event in Kuala Lumpur, Malaysia, on Dec. 13, 2019.

I have heard that you will be speaking this evening in an online town hall on George Floyd’s killing and the topic of police reform.

I’m not in the habit of writing to presidents. Our struggle for justice is a power struggle, not simply a dialogue. But I’m writing to you because, unlike our current president, you have at least adopted a stance of reason. And I hope that our reasonable exchange might offer guidance for others who are looking to understand recent events.

Your initial statement in response to Floyd’s killing revealed a fundamental misunderstanding of the role of police in U.S. society. Because of that, I’m offering my thoughts as an educator who sees an urgent need for massive political education in the context of an explosive uprising and intersecting oppressions about what you should say next.

In your May 29 statement on Floyd’s death, you amplified the words of 12-year-old Keedron Bryant, who sang a viral song about being a black man in America, and of your friend who identified with it.

Thank you for that. These were not simply examples of the trauma of racism as they are frequently presented, but also an important analysis of the interlocking systems of oppression that we are facing. Bryant’s lyric that African Americans are being “hunted as prey,” for example, reminded me of NYPD Lt. Edwin Raymond’s complaint that he “got tired of hunting Black and Hispanic people.”

Bryant’s observance that this is happening “every day,” along with Raymond’s lawsuit against the NYPD for discrimination, counter the idea that racial, extrajudicial state violence is the exception to the rule.

For this reason, I found myself anxious and disheartened when you said that the solution should include “the majority of men and women in law enforcement who take pride in doing their tough job, the right way, every day.”

By presenting things this way during this time, I assume you are trying to avoid alienating police officers who see themselves and their work as a force for good. Their job is indeed challenging, and I know many officers understand their own work that way.

But it is frustrating to see you, an extremely influential African American public figure, refusing to grapple in a more serious, historical, and political way with what the job of the police actually is — and how it contributes to our oppression.

A more historically informed and honest engagement with policing will have to confront a painful but urgent reality: The job of the modern police in America has been to reinforce a racist social order since its beginnings in the 19th century. Regardless of the good intentions of any individual police officer, the history, economic incentives, and culture of the police in every era, in every city in the United States, make this clear.

I understand that there may have been political reasons for your failure to engage in a more serious way when you were campaigning and acting as president, but you are under no such constraints right now.

I’ve heard you say that you believe in reconciliation and redemption. But as Rev. William Barber told a crowd in Charleston, South Carolina, “Before you have grace, there must be acknowledgement.”

The institution of policing is saturated with the slogan “to protect and to serve,” but a deeper look at what police are trained and rewarded for can help us to understand what the real job of police is.

Derek Chauvin was doing his job when he arrested Floyd. You might feel that he didn’t do his job well, but the police union will likely disagree with you. (Lt. Bob Kroll, the Minneapolis police union president, has said he is working to get Chauvin and the three other fired officers their jobs back.) It was not the job of the police to understand why Floyd may have been using a counterfeit $20 bill; it was to ensure that he would be obedient — even though he did not resist arrest.

It was also the job of the police to ensure the subservience of the others who courageously attempted to reason with Chauvin and save Floyd’s life. 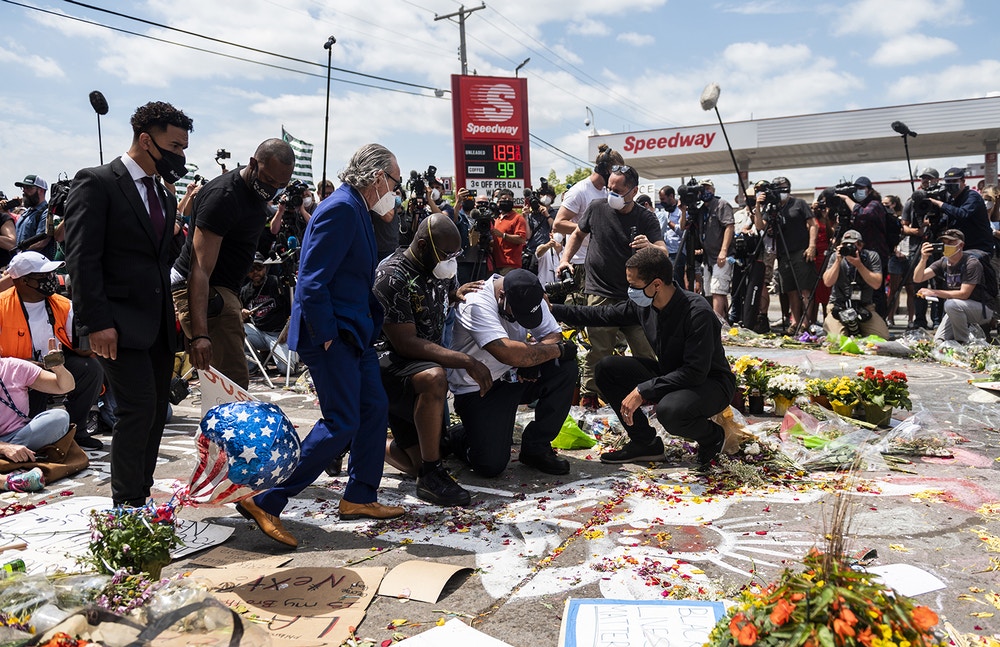 Terrence Floyd attends a vigil where his brother George Floyd was murdered by police one week ago on June 1, 2020 in Minneapolis.

When people hit the streets in outrage, it was the job of the police to enter their neighborhoods in armed trucks, with heavy tactical gear. This is not a small part of their job. You may be familiar with the 1997 bill, supported by your friend, former Vice President Joe Biden, that assisted police departments around the country in acquiring military gear and armed vehicles. The 1033 program helped to ship more than $7.4 billion worth of excess military equipment to over 8,000 police agencies across the country.

Even school districts have obtained weapons and tactical gear, such as rifles, extended magazines, automatic pistols, armored plating, tactical vests, SWAT gear, Mine-Resistant Ambush Protected vehicles, and grenade launchers. Weapons such as these are now being deployed against citizens in cities across the country.

Police officers are trained in domestic counterinsurgency because this is their job. This is why the Minneapolis Police Department defied a ban from Mayor Jacob Frey in order to give its officers a “warrior training”

When the police broke down the door of Breonna Taylor’s home in Louisville, Kentucky, to look for evidence in a narcotics investigation, they were doing their job. Taylor was an EMT. It was her job to save lives. But it was not the job of the police to protect her life. The Louisville Metro Police Department has responded by saying that the police officers did their job: they knocked on the door several times and announced themselves before entering Taylor’s home. What happened next, then, shooting 20 rounds in response to gunfire by Taylor’s boyfriend, including the eight bullets that entered her body, killing her while she was sleeping, was simply an unfortunate but necessary collateral damage of a job well-performed.

Former Glynn County detective Gregory McMichael told police that he suspected Ahmaud Arbery was a burglar. Perhaps, when he called his son Travis McMichael to hunt down and kill Arbery in the streets of Georgia, he felt so boldly empowered to do so because he saw it as a continuation of his job.

Such examples of police violence are often presented as anomalies, but they just scratch the surface of a much wider picture. An honest confrontation with the data destroys any myth of nonoppressive everyday policing. A recent Rutgers University study found that being killed by police is a leading cause of death in young men.

Statements like yours, about a tough but benign everyday policing meant to protect vulnerable citizens, are severely ahistorical. Your comments refuse to acknowledge a few things that happened under your administration.

In the the 23 days between July 17, the date that Eric Garner was killed, and August 9, 2014 — as the Black Lives Matter movement was unfolding, police across the country killed 66 people, according to the Mapping Police Violence database .

It was your Justice Department task force that found that Ferguson’s municipal court “primarily uses its judicial authority as the means to compel the payment of fines and fees that advance the City’s financial interests” in a way that violated the Constitution. In a city of 21,000, 16,000 people had outstanding arrest warrants, meaning that they are actively wanted by the police. This has tremendous implications for everyday policing.

In her book “Punishment Without Crime,” law professor Alexandra Natapoff describes a form that Baltimore police use to record trespassing arrests. It has a blank space for the name of the arrestee, but race and gender are already filled in as “Black Male.”

Modern police departments were not founded to protect citizens. They were founded to preserve and enforce social order within oppressive social hierarchy.

Boston founded what is commonly referred to as the first U.S. police department in 1838 — a year when slavery was still legal in large parts of the country. But this starting point ignores the fact that, in the South, there were already institutions employing hundreds of people to surveil, catch, and punish enslaved black people.

Police departments continue to rewrite history. The Minneapolis Police Department’s website claims that in previous eras, it was involved in battling labor disputes. This sanitizing and deceptive language conceals the fact that Minneapolis police entered struggles between workers fighting for their rights on the side of the employers. In 1934, for example, police officers shot at striking union workers, most of them in the back, and killed two, as MinnPost reported. Other such details about the Minneapolis Police Department’s troubling history are included in a “People’s History of the MPD,“ released by an activist coalition called the MPD150.

Because the historical record of police violence is so conclusive, the only way proponents of policing can counter this history is by pointing out that some police officers are nice and occasionally do nice things.

Mr. President, if you were thinking of doing this, I’d like to save you the trouble.

Despite my own rage about current events, I can acknowledge that some individual police officers are nice and well-meaning. But there are many nice people in ill-conceived organizations. The niceness of individual police officers, or their ability to take a knee, dance at cookouts, or fist-bump protesters, does not speak to the core function of their job. Police are paid for their capacity to suppress dissent and commit violence.

Those who try to work against this system often must risk their jobs to do so. For example, the NYPD 12 who sued the New York Police Department to end the use of racial quotas, were protesting a daily expectation of their jobs.

While establishment Democrats, including your administration, continue to argue that police reform is the solution against all historical and current evidence, a more realistic solution has emerged from organizers around the country: defunding the police and investing in community programs that actually reduce harm.

In the wake of George Floyd’s killing, groups like Black Visions Collective and Reclaim the Block have invited Minneapolis City Council members to sign onto a pledge.

Here are its demands:

In concert with these recommendations, the University of Minnesota has already limited its contractual relationships with the Minnesota Police Department. On Tuesday, Minnesota Public Schools voted to terminate its contract with the police department. Here in Philadelphia, where I live, groups like Movement Alliance Project have helped citizens flood the inboxes of city council members demanding that they reject a $14 million investment into policing that robs funds of social and cultural programs. In Los Angeles, over 1,000 health care workers released a statement rejecting the LAPD budget because of its investment in the LAPD over essential health and social programs.

The logical and evidence-based demand of defunding the police acknowledges that not every social institution can be reformed to serve the public, especially those that were conceived precisely for the opposite reason.

President Obama, you have always played an important role as educator-in-chief. I invite you to join us in offering a more historical and data-informed perspective on the problem of policing and the possible future that awaits us.

In the spirit of reason and justice,