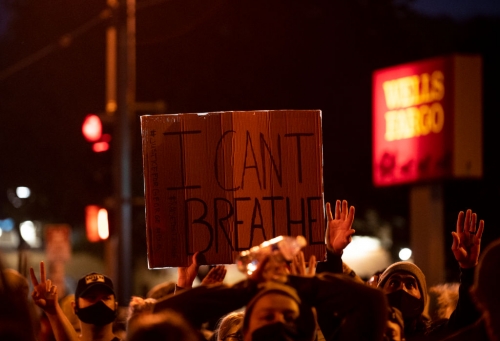 Whenever mass protests of any kind kick off, defenders of the status quo immediately accuse protesters as being duped by “outside agitators.” Don’t fall for it.

Richard Seymour wrote in 2014, “the ‘outside agitator’ line reeks of good old boy vigilantism, the commingling of race-baiting and red-baiting that was typical of Southern counterrevolution in the dying days of Jim Crow.”

This piece was first published at Jacobin.

Over the last few days, we’ve seen a national uprising against racism and police brutality. In response, the first instinct of the defenders of the status quo was to unite behind an old talking point: the uprising was carried out by “outside agitators” from beyond the communities where the protests took place. It’s a trope that should be immediately recognized as both false and designed to downplay and write off the widespread anger that led to these rebellions.

President Donald Trump, Minnesota governor Tim Walz, and Minneapolis mayor Jacob Frey have all blamed out-of-state agitators for the “riots.” Mainstream media soon echoed this narrative. NBC and the Hill were among the outlets reporting St. Paul mayor Melvin Carter saying, “Every single person we arrested last night, I’m told, was from out of state.”

As it turns out, an investigation by KARE 11, an NBC-affiliated television station in Minneapolis, states that “local jail records show the vast majority of those arrested for rioting, unlawful assembly, and burglary are Minnesotans.” The data, taken from the Hennepin County Jail roster, shows that “of thirty-six cases, about 86 percent of those arrested [from May 29 to May 30] listed Minnesota as their address”—four times more than the 20 percent Gov. Walz estimated at a press conference on Saturday morning. Mayor Carter subsequently retracted the incorrect statement, blaming inaccurate information during a police briefing.

Why does this matter? The “outside agitator” trope is today often accompanied by a tirade against “white anarchists” or “Antifa” carrying out the rebellion — while people of color don’t. This is an attempt to isolate and weaken protesters from each other, to make the “good” protesters distrustful and paranoid about “infiltration” by white radicals. (Radicals of color, meanwhile, are nowhere to be found.) Fostering distrust among developing coalitions is a quick and easy way to ensure their swift demise.

These accusations have long popped up in response to civil rights struggles. In 1965, the White Citizens’ Council posted over two hundred billboards throughout the South attempting to discredit Martin Luther King Jr by associating him with communism. One, which shows a photo of King attending a 1957 event at the Highlander Folk School, a key training site for many civil rights activists, is titled “Martin Luther King at Communist Training School.” On the billboard, a giant, cartoonish arrow points directly to King.

Red-baiting accompanied King wherever he went in the South. In 1965, just before the brutal police crackdown of civil rights demonstrators in Selma, Alabama, Dallas County sheriff Jim Clark implied King was an outsider agitator and estimated the march was “possibly made up of one-fourth communists and one-half pro-communists.”

For Clark and scores of white racists throughout the South, the paternalistic idea was that “our Negroes” would never engage in such protests, as they were largely content but were being stirred up by outside troublemakers. Acknowledging that enormous numbers of local African Americans were deeply angry at the status quo and ready to revolt would have meant acknowledging that the status quo was rotten.

Richard Seymour wrote in 2014, in response to the term being employed by both liberals and reactionaries during the Ferguson uprising, “The ‘outside agitator’ line reeks of good old boy vigilantism, the commingling of race-baiting and red-baiting that was typical of Southern counterrevolution in the dying days of Jim Crow.”

Segregationists sought to preserve Jim Crow law by branding black radicals as communists, condemning black activists to destructive investigations from the House Un-American Activities Committee (HUAC) and elsewhere. As Paul Heideman states, “The anticommunist purges of the late 1940s and early 1950s dealt a hammer blow to the movement for racial equality.” A reactionary crusade against communists, aided and abetted by liberal Democrats and premised in many ways in the myth of the outside agitator radical being responsible for civil rights unrest, successfully demolished an emerging coalition between left-led workers’ unions and civil rights activists.

In 2020, the phrase, and these tactics, have once again reared their ugly head. The myth of “outside agitators” is being simultaneously weaponized by conservatives and liberals to demean and intimidate protesters. We shouldn’t let them — it’s an accusation designed to downplay the widespread anger so many are feeling and acting on in this country.

King warned us, “We must all learn to live together as brothers or we will all perish together as fools.”

Don’t fall for defenders of the status quo continuing to blame “outside agitators” for the rebellions sweeping the country right now — they want us to perish together as fools.

In These Times is proud to feature content from Jacobin, a print quarterly that offers socialist perspectives on politics and economics. Support Jacobin and buy a subscription for just $29.95.

Glenn Houlihan is a master’s student at the University of Wyoming researching graduate assistant (GA) unions. In June, he will be joining Yana Ludwig’s campaign for US Senate as the youth caucus and media coordinator.