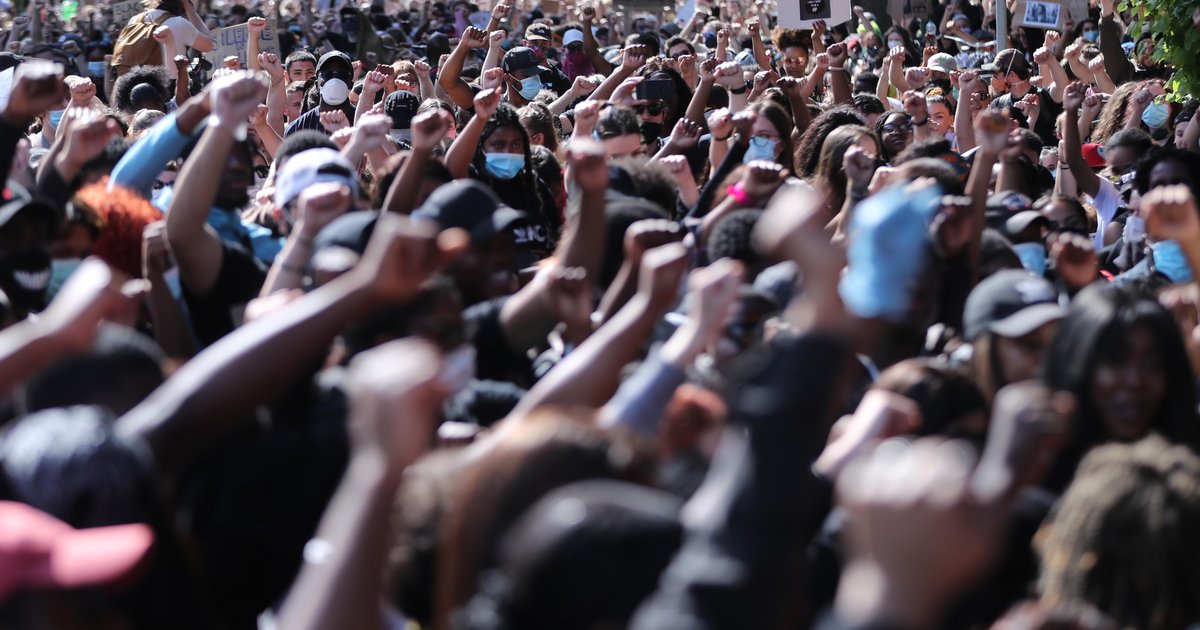 In Amsterdam, where I live, the mayor has gotten a lot of flak for allowing a solidarity protest on Monday. While the organisers expected a couple of hundred people, 5000 turned up. That’s big for a Dutch protest, especially considering we’re in the middle of a pandemic. The backlash against mayor Femke Halsema has led the Rotterdam mayor to say he will send protesters home if more than 80 show up at a similar action planned for Wednesday.

Some of the comments I’ve heard from my liberal white friends are as follows:

‘It’s sacrificing old people now for the good of all people in the future’.

‘People are sick of the lockdown and it was good weather so people decided to go along to the protest’.

‘After all the sacrifice that people have had to make for all these weeks during lockdown, why should this small group be allowed to put it all at risk?’

They clearly haven’t responded to what is happening on the same visceral level that I and many other black and brown people – and even all the white people who have come out in solidarity – have around the world. Like BBC radio presenter Clara Amfo, who bravely spoke to her listeners about racism and explained she had to take a day off work because she was overwhelmed by sadness and anger at what happened. They hadn’t listened to Keeanga-Yamahtta Taylor when she asked how desperate people of colour – who are at significantly more risk from Covid – had to be to go out into the streets.

I was in the middle of writing a book when it all kicked off – I’d decided to use lockdown as a chance to hunker down and get the whole thing finished. It’s about new ideas for economic and social systems and I was writing a chapter about new ways of organising the economy. I haven’t written anything for the past two days because nothing seems relevant.

When the pandemic started, an email with advice started circulating among social scientists. It was mainly about how we should put our mental health first and allow ourselves time to adjust to the new extraordinary circumstances. But there was another important part which said ‘let this distract you from your work. Because the world is supposed to be our work. May this crisis dismantle all our faulty assumptions and force us into new terrain.’

If my chapter about new economies isn’t relevant, I need to ask myself why it isn’t relevant, and change my frame of reference. I had been writing about things like universal basic income, worker-co-operatives, the commons, eco-sufficiency, reducing the working week, Green New Deals, public ownership, and the foundational economy. The chapter on political systems covers things like citizen’s assemblies, direct democracy and ‘radical ecological democracy’. Though global justice and internationalism are central to the way I’m thinking about these ideas and practices, the question remains: would they stop the police killing black people?

Maybe, but only if we understand our economic system as racial capitalism – a world economic system based on colonialism and slavery – and design our alternatives from that starting point. We can also understand our political systems as based not on a social contract, as Hobbes, Locke, Kant and Rousseau would have it, but on a racial contract based on white supremacy. According to Charles W. Mills, racism is at the core of western liberal democracies, not the unintended result of imperfect individuals. If we accept these analyses, then state violence against black and brown people is a necessary part of our economic and political systems, not just in the edge-case of the US but all around the world.

So, if we’re thinking about universal basic income, a four day week or a Green New Deal, we first have to ask: who will benefit from it and where is the wealth to pay for it coming from? Only once we have satisfactorily answered that question should we advocate such measures. And once we think it all the way though, we might find that any version of capitalism, no matter how hard we try to curb its excesses, will necessarily involve oppression, violence and dispossession. How can a system of nation-states competing in a continually expanding world economy based on the control of resources for profit and wage labour not be imperialistic?

In which case, how do we make sure the systems we create to replace it don’t reproduce the same hierarcies? For Cedric Robinson, capitalism was ‘racial’ because it arose out of a European feudalism that was already infused with racialism. Our struggle now is to build a new society free of racism out of the ashes of racial capitalism. It will likely be a society free of race itself. As Paul Gilroy said, race is a product of racism, not the other way round.

For now, hopefully on the way to answering some of those questions, I’m going to let this crisis distract me. I’m going to listen to the protesters, and support the protests in the ways I can. And I’m going to be reading and watching Cedric Robinson, Charles W. Mills, Angela Davis, Walter Rodney, Edward Said, CLR James, Akala, Ash Sarkar, Gloria Wekker, Kehinde Andrews, Keeanga-Yamahtta Taylor, Paul Gilroy, Kwame Nkrumah, Reni Eddo-Lodge, and Stuart Hall.

To everyone out there: stay safe, sane and healthy.