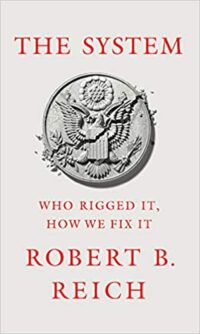 Robert Reich’s new work, The System: Who Rigged it, How We Fix it offers a wide-ranging critique of our nation’s contemporary political and economic ills. Reich does a brilliant job succinctly reminding us of the scale and scope of corporate corruption, economic inequality, and political spinelessness in America.

Reich’s diagnosis is on point and there is not much to quibble with. He focuses the first half of the book on the finance sector and the arrogant, misguided, debauched behavior of one of its leaders, Jamie Dimon, Chairman and CEO of JP Morgan Chase Bank. Reich relentlessly demolishes the arguments of neoliberal capitalists such as Dimon and their insane drive to privatize, deregulate, and put profits and stock prices over the needs of the people.

He reveals how banking institutions, unethical lobbying, and the revolving door phenomenon of politicians and regulators entering the private sector to profiteer has eroded democracy and left us with a tiny oligarchy of super-rich who buy off our political system. Reich rightly points out that most Americans understand this, especially as corporate profits and CEO pay skyrockets as wages stagnate for the majority of citizens.

Let’s give the man credit where it’s due: Reich does a great job in this book documenting the demented history of finance capital of the last decade or so. Reich should stick to history, because while he may be popular due to his work in government and journalistic forays, his economic and social policies are little more than your standard boiler-plate liberal/progressive proposals.

My problem lies with his prognosis. Reich is a proud progressive type, but his dyed-in-the-wool liberal economic background exposes him as a relic of a bygone era. For instance, one of Reich’s previous books is titled Saving Capitalism. The majority of young people (Gen Z and Millennials) increasingly favor socialism over capitalism, because they are in the thick of the post-2008 perma-recession economy which shows no hope of getting better since the Covid-19 pandemic has started, not to mention systemic racist policies which have exploded into a national uprising. (Reich’s book was published in March 2020, and so was probably finished in mid-late 2019, which explains the lack of mentions.)

Capitalism ultimately cannot exist with democracy; they are mutually exclusive. Rather it must evolve into something better either through revolution or non-violent mass protests and worker strikes, with working class movements at the base of any such paradigm shift. It’s a very common delusion among republicans, centrists and liberal democrats that capitalism can be saved, which is what Reich leans back on towards the conclusion of this book, unfortunately, and it’s not an original or compelling argument.

Reading Reich is a bit unsettling because it sounds like listening to Elizabeth Warren speak: “If we just have the right policies, a wealth tax, and regulate those banks!” If only it were that simple, Robert.

Time has passed Reich by. Being a Clinton official (ahem, lackey) is no longer seen as a positive thing in progressive circles, never mind leftist ones. The country has moved on from the elitist liberal perspective and there are basically three popular political archetypes today: the nationalist conservative faux-populist (Trump being the current avatar), the neoliberal centrists (Biden, but also Clinton, Jeb Bush, Kasich, Klobuchar, Buttigieg), and the populist democratic socialists (Sanders, Alexandria Ocasio-Cortez).

“The System” Reich has spent so much time trying to save is hopeless. Let’s just take his subtitle, “Who Rigged It, How We Fix It”, as an example. This type of thinking is the liberal version of Make America Great Again: things were going well in the post-WWII Keynesian economy, then somehow it fell apart due to a few bad actors that brought us neoliberal policies and not the nature of capitalist political economy, and all we have to do is repair it through technocratic economic policy adjustments Well, yes, the more distributive policies and higher taxation from FDR through the mid-seventies were better, certainly, but capital has moved on from this “stakeholder” model as Reich calls it; and it is fundamentally against returning to empowering unions and instituting social-democratic governance in the US.

This type of wishy-washy have your cake and it eat too thinking, again, is basically what Elizabeth Warren was saying in her 2020 presidential campaign. Most American progressives are on board with Sanders’ more radical vision of democratic socialism and that’s simply not going to change; if anything, progressives will advocate for even more radical policies in the face of a global pandemic, civil unrest, and economic depression. What’s confusing, and frankly disappointing, is that Reich endorsed Sanders for president, yet many of the quite good policy proposals are barely mentioned in the text.

Reich certainly does mimic and emulate the professional-managerial class policies and affect of Warren, but another figure is even more apt. About halfway through the book, a different comparison became clear to me: Reich is much like a modern-day John Kenneth Galbraith, a liberal establishment economist who became famous in the 1950s and 60s. Old heads know that Galbraith’s The Affluent Society and The New Industrial State were essential reading, as they were for yours truly in my late-teen/early twenties political bildungsroman as a wannabe social theorist/political philosopher, as well as for many more theory nerds and leftists. I imagine trying to wrap one’s head around Galbraith back then is similar to reading Reich now: a frustrating endeavor when it is readily apparent Galbraith/Reich are clearly, in some respects, smart enough to know better regarding how hard “the system” will fight back to preserve its privileges (like Obama), but simply blinded by capitalist ideology and possibly personal issues (lust for status/social capital/power) which hold them back. As I finished the book, I chuckled: Warren and Galbraith are both included in the acknowledgements!

Let’s return to the subtitle again. Consider an example of something we can all agree is “rigged”: a casino. Can one “fix” a casino? Not really, because it’s a perfectly legal business even if it is shady and unethical, makes a ton of profit and therefore has immense power behind it, and is backed by all sorts of financial and lobbying interests. Sound familiar? That’s capitalism in a nutshell. The solution to the casino question, and thus capitalism, is to stop playing the game.

Reich has benefitted from immense privilege and it is no surprise that his rosy optimistic view on capitalism is what allows him to retain a professorship, remained ensconced in a liberal bubble, and maintain a national audience for his literary and journalistic forays. In essence, he makes a living telling people exactly like him (urbane, liberal, upper-middle class professionals) what they want to hear: that the system can be saved.

Like many other political commentators, however, popularity is no evidence of profundity or wisdom. Reich fails to consider what “The System” really is. The system we call the USA is really an empire, in our case a modern empire not sustained through territorial conquests, but driven by cheap fossil fuels, by controlling the global money supply, by exploiting cheap foreign labor and supply chains; and empires do not get fixed. They rise, they plateau, they decline, and they eventually collapse.

What’s just plain sad is that for someone who endorsed Bernie Sanders for President in 2020, Reich does not give much more than a passing nod to the passionate base and social movements which underlie and bolstered the Sanders campaign. As an eminent public intellectual, Reich is simply shirking in his duty to educate and foster class consciousness among his many avid liberal readership; some of whom are on the cusp of radicalization.

Serious progressives want the American empire dismantled, and that task is simply not compatible with attempting to fix a capitalist system that is broken well beyond the point of repair. Capitalism relies on alienation and exploitation of workers to produce surplus value-profits- for corporations, and there is no work-around, amount of magical thinking, or deus ex machina that will save it and make it ethical and equitable. Propping up capitalism, or repairing it as Reich implies, would necessarily involve maintaining the empire and all the advantages it brings in, which is ecological and financially unsustainable in the long run, but more importantly is immoral and unjust to the majority of the world’s population. If Reich were to step out of his self-imposed bubble, he could see this.

William Hawes is a writer specializing in politics and environmental issues. He is author of the ebook Planetary Vision: Essays on Freedom and Empire. His articles have appeared at CounterPunch, Global Research, Countercurrents, Gods & Radicals, Dissident Voice, The Ecologist, and more. You can email him at wilhawes@gmail.com. Read other articles by William, or visit William’s website.

This article was posted on Wednesday, June 3rd, 2020 at 4:57am and is filed under Book Review.