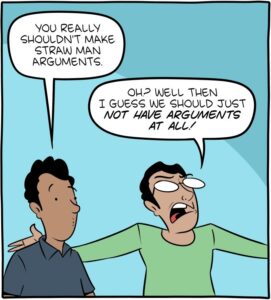 Paul Craig Roberts, a staunch opponent of police brutality in his writings, seeks to deny white racism or argue that we are all racist. In a recent article, he writes, “If white people are racist, how was Obama twice elected president of the United States?”

His second question — “Are white people racist by nature?” — is a strawman. First skin pigmentation does not correlate with an inherited attitude. Obviously any racism is inculcated or otherwise learned. You are not born into the world a racist.

PCR claims that the Civil War was simply “to free black people from slavery.” PBS.org framed it otherwise,

A common explanation is that the Civil War was fought over the moral issue of slavery. In fact, it was the economics of slavery and political control of that system that was central to the conflict.

At the time of the Civil War, PCR’s argument must be that northern whites were not racist, at least not by nature, but the southern whites must be racist since they practiced slavery or were insouciant to the practice around them. The argument (that whites are not racist) is becoming puzzling because whites are being divided up into those who are not racist because they are opposed to slavery and those who support slavery, hence they must be racist based on their behavior. As far as northern whites are concerned, the writer has answered his own question about whether slavery is a part of the white people’s nature. Or is PCR hypothesizing that such a nature can be overcome?

Moreover, if slavery equates with racism (and data indicates that it does because seldom was slavery imposed by whites on other whites in the US, and never chattel slavery), then PCR must by virtue of his argument agree that, prior to the Civil War when slavery was also practiced in northern states, the slave owners and those who were silent about slavery in their region were racist.

PCR continues to try and shoot down the notion of white-on-black racism: “It is these same racist white people who passed the 1964 Civil Rights Act 56 years ago and permitted the establishment of racial quotas and contract set-asides for blacks that gave blacks rights and privileges that white people do not have.”

First, it was PCR who came up with the strawman argument that white racism is part of white nature. The premise, as already argued, is fallacious and to argue against one’s own fallacious premise is plainly illogical. Second, now the writer points out that “many [whites] are upset about George Floyd’s death from police violence”; ergo, there are some whites who are supposedly insouciant (or maybe even pleased) about the police killing. The conclusion is that not all whites are racist and certainly not by nature racist.

The writer wants to look at a multifaceted issue with a black-and-white lens. Obviously that is a wrongheaded way to approach any issue. If one genuinely wants to understand an issue, one should consider all the possible causes related to the outcome in question, and not investigate only as an either-or issue; the latter being a path to bias and prejudice.

No reasonable thinker denies that there are factors beside racism that predispose police to brutality and killing. Peer pressure, the corrupting influence of power, militarization, media glorification of cops, etc. People know that some police run rackets, engage in the drug trade, sex trade, accept freebies, practice extortion, etc. Cops that do not participate but know of such criminality among their ranks are also bad apples. Although there are a plethora of bad apples in the police orchard, few would argue that all cops are bad apples. However, given the sordid side of policing and the militarization of policing in the USA, becoming a cop might not be the best career choice for a morally centered person. There may be some who enter a career in policing ignorant of the systemic racism and criminality and others who know but vainly hope that they can be part of bringing policing back to the role of serving the public.

PCR continues, “A multicultural racially diverse society, which the United States has become as a result of illegal immigration and the change in immigration law in 1965, cannot survive if race hatred is a feature of the society.”

No country can survive if race hatred is a feature of the country. As for “illegal immigration,” why frame it in terms of legality? Was it legal when Europeans slaughtered the Indigenous peoples of Turtle Island and stole their land? Who is primarily responsible for the emergence of a multicultural racially diverse society (which I see as an enrichment of a tolerant society)? Was it not white people who violently inserted themselves into a continent of several Indigenous nations? Was it not white people who abducted Africans as chattel?

PCR criticizes the protestors; “None of those screaming racism are interested in stopping police violence.”

If they are not interested in stopping police violence, then why are people in the streets? As for “screaming racism,” a random sampling of the placards does not indicate racism as a motif of the protestors. The abundance of signs read “Black Lives Matter,” “I can’t breathe,” “Justice 4 George Floyd,” and “No Peace, No Justice.”

PCR raises another strawman: “Of course there are racists, but the assumption that these animosities exist only between skin colors is problematic. In modern times the most extreme manifestitions [sic] of racial violence are tribal between blacks themselves, such as the Rwandan genocide, the mass slaughter of Tutsi by the Hutu.”

Who assumes animosities exist only between skin colors? It seems that PCR argues this to attack black-on-black violence. He elides white-on-white extreme violence such as Nazi Germans against other Europeans, Jews, and Communists; the British-on-Irish violence; etc. PCR also is ignorant of the western (read white) world’s involvement in the Rwandan genocide.1

PCR raises another point of contention. “Indeed, the black slave trade is the product of blacks themselves and has its origin in 1600 in the slave wars fought by the black Kingdom of Dahomey…. It is as if it never was written.”

It is not down the memory hole. This is tu quoque argumentation by PCR. It is elementary morality that “we” are responsible for “our” crimes and atoning for those crimes. That blacks also practiced slavery does not make white slavery against blacks (or any other peoples) any more acceptable. All slavery is abhorrent, but “our” focus should primarily be on righting “our” wrongs.

PCR asserts, “Whites, of course, have committed far more violence against one another than they have against people of color.”

First, PCR verges on contradicting himself, as he wrote in the same article: “In modern times the most extreme manifestitions [sic] of racial violence are tribal between blacks themselves.” Second, PCR, too often, does not substantiate what he writes. According to professor David Stannard, “The destruction of the Indians of the Americas was, far and away, the most massive act of genocide in the history of the world.”2 ” After 1492, 95 percent of the Indigenous people were wiped out; maybe 100 million.”3 Third, the logic fails big time because no one denies inter-group violence. Does that mean that one cannot feel prejudice toward an out-group member? During the world wars, blacks and Indigenous peoples joined the military and fought (even though still experiencing discrimination and racism within the military) against the enemies of the US. Nationalism can often cause a coming together of different groupings within a country.

PCR complains, “Even white language is said to be racist. The banned n-word is said to be symbolic of white racism. But every white ethnicity has been called names that are slurs— dago, polack, frog, limey. The Irish are bog-trotters.”

White language!? What is white language? Is that English as is spoken by so much of the world that includes African countries, India, Hong Kong, etc? As for slurs, there are words better avoided because of the hurt and offense they can cause to others.4

PCR asserts that his questions do matter to a racially diverse multicultural society. “Such a society cannot survive the cultivation of racial enmity. When the goal is revolution, not reform, racial enmity is the weapon.”

I postulate that a great deal of the protests are because proposed reforms have led nowhere. The system perpetuates itself. It is the system that needs to be overthrown and replaced. That calls for revolution. As Mark Twain once said,

I am said to be a revolutionist in my sympathies, by birth, by breeding and by principle. I am always on the side of the revolutionists, because there never was a revolution unless there were some oppressive and intolerable conditions against which to revolute.5

Kim Petersen is a former co-editor of the Dissident Voice newsletter. He can be reached at: kimohp@gmail.com. Twitter: @kimpetersen. Read other articles by Kim.

This article was posted on Thursday, June 4th, 2020 at 7:00pm and is filed under Activism, Racism, Revolution.