Every 4 June, a famous photo from 1989 is splashed all over the world, as a symbol against Chinese “totalitarianism” and “bloodthirsty brutality”. You know the one I’m talking about, Tank Man. It is flaunted like a Western talisman to celebrate “freedom” and “rebellion” in the face of “communist-socialist tyranny”.

Nonetheless, like all the disinformation by the Big Lie Propaganda Machine (BLPM), you’ve been blatantly brainwashed for 31 long years. Many media lies are perpetrated by omission. A truth untold is a lie, and Tank Man tops the list.

Let’s first look at the iconic image burned into every brain around the world, 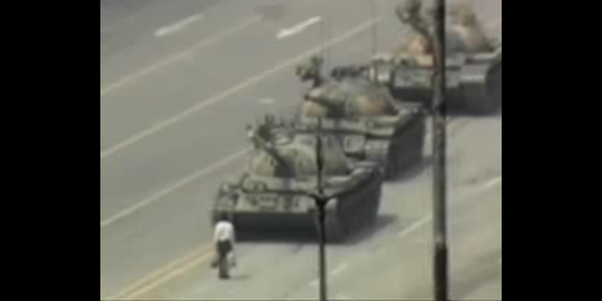 It shows a man standing in front of a column of military tanks near Tiananmen Square in Beijing, China. The BLPM has been hurling in your face for over a generation now,

It’s one lone, brave David who stopped the evil Goliath Communist Party of China (CPC) in its corrupt, genocidal tracks, as its PLA (People’s Liberation Army) rolled into Tiananmen Square to mow down and crush thousands of freedom loving, peaceful protesters later that night, who only wanted “free market” capitalism and Western “democracy”!

Not really. Yet, I bet you’d go to your death bed believing it all as fact. Let’s see what really happened that day. 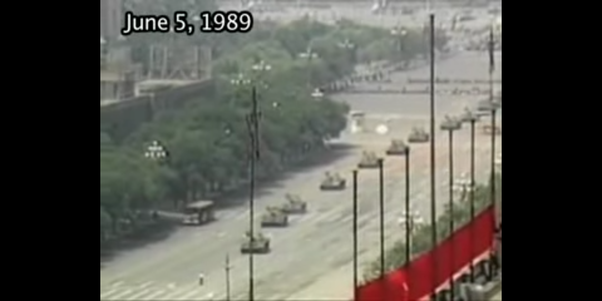 First BLPM fake news: Tank Man was photographed on 5 June, the day after Tiananmen Square was cleared of protesters the night before. This has been certified by James Widener, the Associated Press journalist who took this now glorified photo blasted around the world, although there were a handful of other photographers who were there too.

Second BLPM fake news: Mr. Widener testified that the column of tanks was leaving Tiananmen Square, not entering it. Almost every BLMP photo has a caption saying something like this one,

In fact, you can see Tiananmen Square off in the distance, but you would never know it. I know this for a fact, because I’ve driven across that same spot hundreds of times over the years. The BLPM disinforms 24/7. Also, behind the tanks on the other side of the street, notice the burned-out public bus. CIA-trained saboteurs destroyed a lot of property the night before (see all my previous anniversary articles and The China Trilogy below, the latter in which I synthesize it all into a cohesive whole).

Third BLPM fake news: the man who stood in front of the lead tank was not a “freedom loving student protester”, but a local citizen who was out shopping and going back home with his sacks full of purchases. He was almost all the way across Chang’an Boulevard, the one that runs east-west across the top of Tiananmen Square, saw the tank column coming his way and walked back into the center of the street to have some fun. Tiananmen Square being his neighborhood, he probably wanted to express his frustration at the five-week long protest shutting down his streets and destroying so much property. No protesters were around to scold, so these tanks would do the trick.

Being a regular citizen and the day after the biggest protest in modern Chinese history, to pull off such a purportedly cheeky stunt, what does it tell us about his confidence in the government and military?

Rachel Corrie tried that in Palestine and was crushed to death by Zionists. 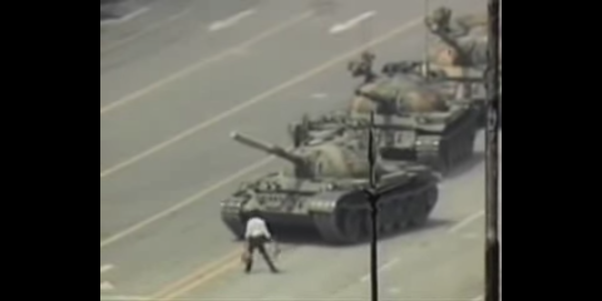 Then, the tank driver politely went out of the way to avoid hurting this man, trying to go left, right and around him. Unable to pass, the tank shut off its engines, probably to avoid an unintended accident. 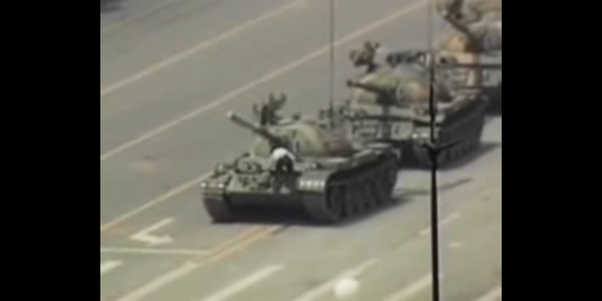 Then, Tank Man really had the time of his life and climbed up on the front of the tank. 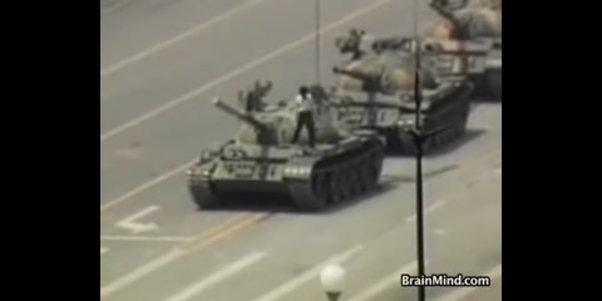 Like most of us, he’d never gotten to see a real live tank up close, so he spent a couple of minutes checking out the really cool gear. He was especially fascinated with the covered, mounted machine gun on the turret and spent a good minute admiring it. Heck, given the chance, most of us would love to inspect one too. 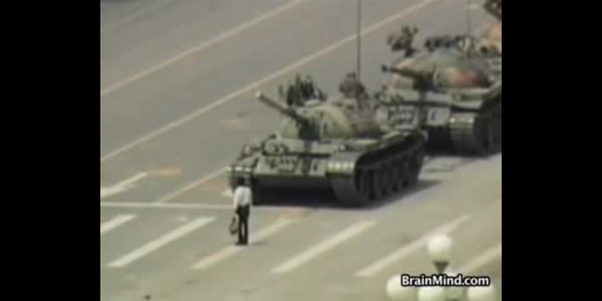 As he was getting down, a soldier even opened the hatch to talk to Tank Man, asking him to please leave. This is never mentioned in the BLPM. They surely had sidearms on themselves and machine guns inside the tank. The soldier didn’t wave a gun, shoot rounds over Tank Man’s head or into the air. The crew member was just signaling to him to please get out of the way.

Compare this to a fascist country like the United States. In New York, a George Floyd protester last week stood up on the hood of a police car and got pummeled by a swarm of cops, using billy clubs. I wouldn’t want to pay his hospital bill, if he was lucky enough to survive.

I’m not exaggerating about possibly not making it. Two-thousand Americans get killed every year while being arrested. That was the number reported in 2016. You can bet your sweet bippy that number of murdered is a lot higher now. Almost all of them are Black, Brown, Red, Yellow and/or poor. Racism and top down class warfare are key.

Anyway, back in socialist China, where there is real people’s democracy, after Tank Man got back down, he stepped out of the way, signaling them to go ahead (not shown in this photo sequence, but can be seen is the short clip below). So, the tank cranked up its motor to proceed, and Tank Man again stepped in front of the lead tank. By this time, it was like a running joke. Two crew members stuck their heads out the hatches and asked him again to please not block their way. Having lived and worked with Chinese people for 16 years and seen how the cops and People’s Liberation Army (PLA) behave so civilly, I can just hear their conversation,

Tank Man: goddamit, for five weeks my life has been totally fucked up by these protests and I’ve had it up to HERE with all the disruptions! I’m sick of this shit… Now, I can’t even go shopping without a bunch of roaring loud army tanks ruining a perfectly quiet and beautiful morning!

Tank driver: Come on man, it’s hot as hell in here and all of us have had a rough time with what happened recently. Like you, we just want to go back home and be with our families. Tomorrow’s a new day, comrade. The Big Wheel of Life keeps on turning. Thanks, brother!

Tank Man was never threatened, never hurt. He was not afraid of his communist-socialist government or the PLA. Frustrations were probably being felt on both sides, but they talked about it peacefully.

For the rest of the world, the above photo frame is the end of the story. The BLPM script ends there. I’ve even seen photo/video sequences where the tank crew members talking to Tank Man are cut out or intentionally not mentioned. The rest is censored. From that point on, Tank Man’s fake news photo saturated the world for weeks on end, with huge headlines and printed t-shirts putting words in his mouth like,

As I have written until I’m red in the face, since liberation in 1949, the Chinese have had and continue to have much more consensual, participatory democracy than the West ever had in the last 2,500 years. Also, “Close to Civil War”? Are you serious? It was desperate, wishful, imperial, global capitalist BLPM disinformation – wrong on both accounts.

Thus, returning to Tank Man, no one usually gets to see the rest of the censored sequence, so, what happened?

Photo #7 (left out of the montage above): 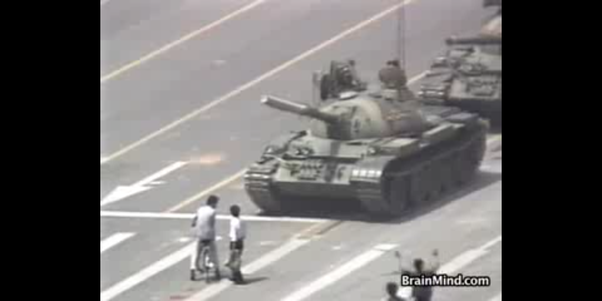 After getting back down and briefly messing with the tank a second time, other shoppers started crossing the street. 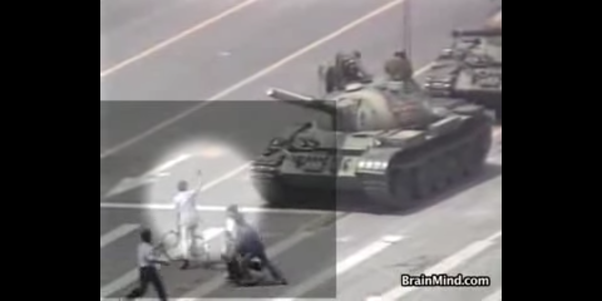 They all met in front of the lead tank, talked briefly together and with the two tank crew members, whose heads were sticking out of the tank hatches waving at them. One of the neighbors on their bicycle waved back to them, (highlighted) probably saying something like,

Sorry to slow you down, comrade. He’s just tired and had a rough night with all the protests. Didn’t sleep a wink. We’ve all had a tough time, haven’t we? Take care, friend! 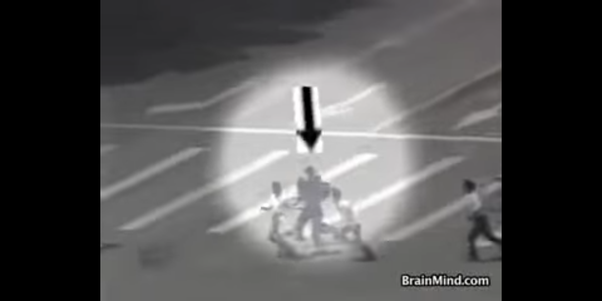 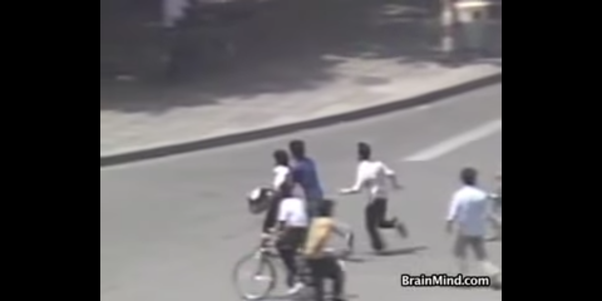 Then as a group, they scurried across the rest of the very wide Chang’an Avenue, on their way home, like all pedestrians do, when they see traffic coming down the street and want to get across before the vehicles pass. Photo #9 has an arrow pointing to Tank Man, to show he’s among the parting citizens.

End of story. No guns, nobody shot, no brutality, nobody killed, nobody run over, nobody even got a scratch. The whole story boiled down to a homie from the Tiananmen hood. He had some chutzpah, a cheeky sense of humor, trusted his communist-socialist government and military, so decided to vent his weeks of frustration in a very colorful and creative way. Luckily for him, he didn’t live in the West, where protesters are violently attacked, shot at, run over and killed as a matter of course.

I always feel very safe and relaxed when I’m in democratic China. When I go back to the United States, I’m scared to death to get pulled over by the cops and know that I can be shot on a whim, with little to no recourse. It’s rapidly reaching that point in my other country, France. The contempt and loathing that the West’s aristocratic 1% has had and continues to harbor since Ancient Greece know no bounds. For them, we – the 99% – have always been subhumans.

Confucism-Daoism-Buddhism-Communism-Socialism is diametrically opposed to fascism.

And that, my friends, makes all the difference. Tank Man lived to tell his story.

This article was posted on Friday, June 5th, 2020 at 7:47am and is filed under China, Disinformation, Narrative, Opinion, Propaganda.