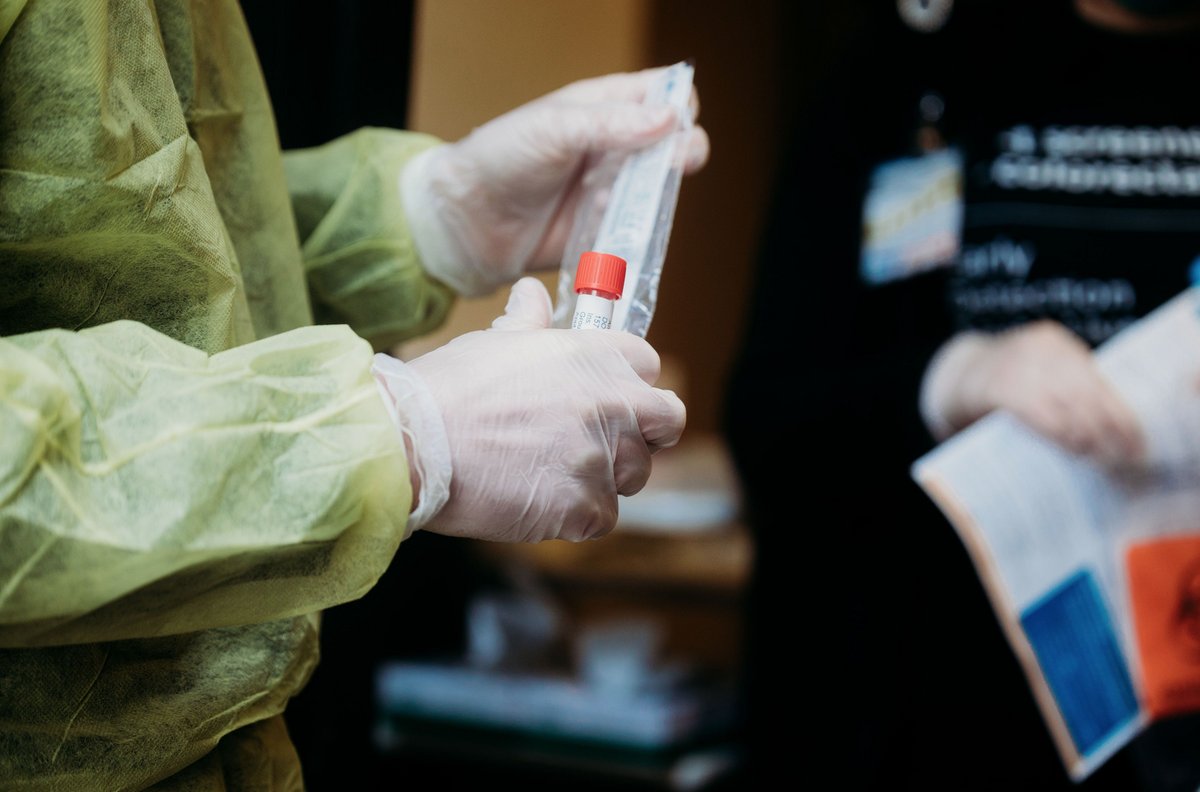 Community health centers have been on the front lines of providing health care in the nation’s poorest neighborhoods since the 1960s. Now they are ramping up their efforts to serve low-income individuals and families devastated by the COVID-19 pandemic.

More than twenty-nine million Americans receive health care at the nation’s nearly 1,400 community health centers, which provide primary care to patients regardless of their ability to pay. About a quarter of the people who use these centers are uninsured; about half are on Medicaid. Almost 70 percent live in poverty.

COVID-19 is the greatest crisis community health centers have faced since they were founded in 1968, says Dr. Ron Yee, chief medical officer of the National Association of Community Health Centers, a nonprofit advocacy group based in Bethesda, Maryland.

“Our patients are the segment of the population most affected by the pandemic,” Yee says in an interview. “In addition to high rates of chronic conditions like heart disease and diabetes, they need social support for food insecurity, depression, and anxiety.”

“Thirty-six percent were Latinos and 22 percent were African Americans, groups who will need services because the pandemic has increased ethnic and racial disparities,” Yee says.

And Yee predicts that rising unemployment will cause caseloads to soar this summer.

About seven million Americans are expected to lose jobs with employer-provided health insurance by June, according to a recent report by researchers at Hunter College in New York City. The loss of coverage will be greatest in states that did not expand Medicaid under the Affordable Care Act.

“People who are struggling to put food on the table can’t afford to pay a physician out of pocket or visit the emergency room of their local hospital,” Yee says. “They will come to us because they have no place to go.”

Meeting the needs of increased numbers of vulnerable patients won’t be easy because the centers operate on razor-thin budgets. The majority of their funds come from the federal government, which is struggling to restart the economy.

“Although [community health centers] received $100 million in an early relief bill to bolster testing and supplies and $1.32 billion from the $2.2 trillion [CARES] stimulus pact,” Yee says, “they need additional funds to get through the crisis and provide a secure foundation for future care.”

Community health centers provide safety-net services all in one place. Children, the elderly, and people who are unemployed can obtain services regardless of their ability to pay, all in one accessible location.

COVID-19 is challenging this approach by compelling centers to find new ways to deliver care to patients who have chronic diseases like diabetes and are sheltering at home.

While community health centers have seen their caseloads increase, their income has not. In many cases, the services they provide are not being reimbursed because of the limitations of Medicaid and Medicare.

The importance of community health centers has increased now that routine primary care visits at other providers have been canceled to slow the spread of the virus. To meet the growing need, they are increasingly relying on telemedicine.

Virtual appointments can be used to update prescriptions and other elements of treatment plans during the pandemic. They also enable practitioners to provide emotional support, which helps alleviate patients’ stress so that they will continue to take their medication, exercise, and eat healthy foods.

But while community health centers have seen their caseloads increase, their income has not. In many cases, the services they provide are not being reimbursed because of the limitations of Medicaid and Medicare.

Financial losses have been severe in Illinois and California, which have emerged as hot spots of COVID-19. In late March, the Illinois Primary Health Care Association warned that the state’s fifty-one community health centers face losing $181 million in funding by June, and that 4,350 workers at the 390 facilities they operate may face layoffs over the same period. The impact has been even greater in California, which in mid-March became the first state to direct people to stay home.

“It will be very difficult to serve people in rural areas where there is a shortage of physicians,” Castellano-Garcia says, noting that 200 sites have closed and others are contemplating staff layoffs. Vulnerable populations such as migrant workers, veterans, and the homeless, she adds, “will need education in ways to protect themselves against the spread of the virus.”

Castellano-Garcia says increased testing will be needed to avoid risking an explosion of new cases when stay-at-home restrictions are lifted. During the first seven weeks of the pandemic, the United States conducted about 5.4 million tests, the equivalent of about 1.6 percent of the population.

“Currently, we serve one in three Medicaid recipients in California, so we can play an important role in freeing hospitals of this responsibility,” she says.

“The COVID-19 pandemic is the Great Depression on steroids,” remarks Raleigh Watts, executive director of the Country Doctor Community Health Centers in Seattle, Washington, which he says serves more than 68,000 adults and children. “But we are prepared because we have been providing health care for five decades for individuals who have lost jobs as well as those who cycle in and out of poverty.”

Country Doctor’s two clinics were founded by community activists who believed that health care is a human right. Based in an abandoned fire station in the Capitol Hill neighborhood of Seattle, Country Doctor opened in 1971 as a free clinic staffed by volunteers. In 1988, it merged with the Carolyn Downs Family Medical Center, which had been established by Seattle’s Black Panther Party in 1968.

Today, the clinics offer primary care for acute conditions like sinus infections as well as chronic conditions like hypertension, diabetes, and depression. Other programs serve the homeless who are battling HIV/AIDS or opioid addictions.

“In the 1970s, when Boeing, Seattle’s largest employer, laid off half their workforce and thousands of employees of firms that depended on the airline manufacturer lost their jobs, we learned that unemployed people need more than medical care to survive,” Watts says. “They also need social support and encouragement to move ahead in all facets of their lives.”

The pandemic-induced recession has increased inequality in the Seattle area, escalating the need for services among those cycling in and out of poverty, notes Watts. Two-thirds of center patients are at or below 200 percent of the poverty line. Forty percent are on Medicaid, and 8 percent are on Medicare. (In 2019, the national poverty level was $21,330 for a family of three.)

“There are many people who work two or three jobs to pay the rent because Seattle is the sixth most expensive place to live in America,” Watts says. “Our dental clinic is a lifeline for people who need routine cleaning, extractions, and other procedures. During the coming months, our programs for battling homelessness or addictions, and transitioning from incarceration, will become more important.”

Like Country Doctor, the Sixteenth Street Community Health Center in Milwaukee, Wisconsin, was founded by passionate individuals who wanted to provide health care to the poor. Today, it is one of the largest federally backed community health centers in Wisconsin, with four (soon to be five) full-service clinics; a satellite geriatric clinic; a Women, Infants, and Children program; and a myriad of supplementary services.

“[We’ve focused on] what the community needs to thrive for fifty-one years,” says Dr. Julie Schuller, the center’s president and chief executive officer. “We have become the primary medical safety net for more than 43,000 individuals and are in a unique position to meet their needs as well as other residents of the south side of Milwaukee whose health and well-being has been upended by the pandemic.”

The need for COVID-19 testing is dire, Schuller says, because many residents work in essential industries such as package delivery and grocery stores, where the risk of exposure to the virus is high. The center started testing in April and completed 700 tests that month, 10 percent of the total tests administered in Milwaukee County.

“Many Latino residents as well as recent immigrants from Iraq, Somalia, and other countries who are unfamiliar with the U.S. health system need information about symptoms and criteria for testing,” says Liz Claudio, the center’s vice president of operations. “In addition to materials in English and Spanish for our staff, we developed a toolbox of flyers, posters, and social media posts that local organizations can use to get the word out. We also provide translation services.”

The center completed a detailed analysis of what patients may need to cope with the pandemic—everything from maintaining social distancing in the workplace to supervising children’s homework to obtaining emergency food. It also prepared written letters that patients and their families can provide to employers who are concerned about how patients are responding to the crisis.

“Some programs like healthy choices, a walking and bicycle group for adults, and an emotional support group to improve the self-esteem of thirteen- to sixteen-year-old girls, have been canceled,” says Rosamaria Martinez, vice president of community health initiatives. “We keep in contact with members by telephone to suggest how they might use the skills they learned to stay healthy during the pandemic.”

Maria Perez, vice president of Sixteenth Street’s behavioral health program, says the half-hour telemedicine sessions offered by her department have been well received by seniors who have never used technology before. But she argues that Medicaid and Medicare rules need to be changed to ensure that providers who use telemedicine receive sufficient reimbursement and at the same level as face-to-face sessions.

“The most important resource we have to help the community get through the difficult months ahead is the commitment and ingenuity of our staff,” Perez says. “No matter what needs to be done—delivering food to the homes of patients, counseling a frantic mother of an ill infant, or figuring out a safe way for a patient to get to work—the staff does it.”