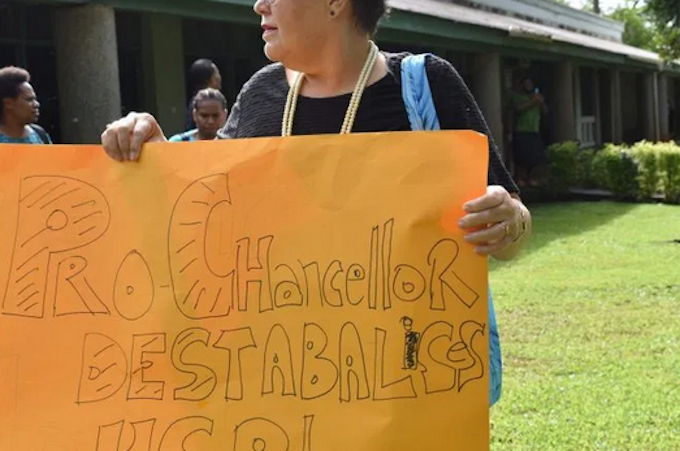 A “fight for justice and good governance” at the University of the South Pacific has continued as staff and students have echoed strong calls for members of the USP Council to allow the Vice-Chancellor, Professor Pal Ahluwalia, to carry out his work without interference.

Hundreds of protesting staff and students rallied outside the New Administration Conference Room at Laucala campus in Suva, Fiji, yesterday with placards showing solidarity and support for Professor Ahluwalia as the special executive committee of the council convened a meeting to discuss allegations of “material misconduct” levelled against the vice-chancellor.

Media reports said he had been told to “step aside” after this meeting. Professor Derrick Armstrong was reportedly appointed acting vice-chancellor and president to manage the affairs of the university.

Concerned USP staff member Elizabeth Fong said the show of solidarity for the vice-chancellor was also a call for good governance to prevail at the regional institution owned by 12 countries – not just Fiji.

“We don’t agree with what they are doing to [Professor] Pal. They are not letting him as VC do his work. Actual justice allows him to work by his contract, and if they had issues, there is a process and a way of managing it,” she said.

“The entire council of the university, which is regionally owned, needs to be part of any decision to remove a VC or suspend him so we are here to show that we want good governance to be put in place and to be practised by those who lead and govern us.”

Fong said it may be necessary for the USP Chancellor to step in to resolve the issue.

USP Students Association (USPSA) federal council spokesman Aneet Kumar said the students also wanted a quick resolution to the issue and made clear the student body supported the work done by the vice-chancellor done so far.

“There was a lot of outrage last year when the breaches of past management came to light,” Kumar said.

“Even the academics were pointing out that since we have a compulsory governance course, where is this going, what are we trying to teach and preach?

“There needs to be some common ground to reach. This is very disheartening for students. The student body sent a letter to the USP Council to express our disappointment at the way the matter is being handled.”

Students at Laucala campus also turned up with their placards of support, with student body vice-president Naulivou saying the believed the vice-chancellor had practised good governance.

“There are a lot of needs and wants out there but he [Professor Ahluwalia] came down to ground level and listened to us,” Naulivou said.

“That’s the only thing that pushed us to know the VC, his mission and vision. He visited the Lautoka campus and spoke to students, he begged students to say what they want. And what we want is good governance and transparency.”

Meanwhile, Professor Ahluwalia addressed staff and students yesterday saying he would continue to “fight for justice, transparency and accountability” within the legal framework.

The whirlwind of events started in March last year when the allegations of policy breaches of past financial decisions, such as speedy recruitment, appointments, promotions and questionable allowances for extra responsibility as well as breaches of the staff review procedures surfaced in a leaked confidential 11-page document drafted by Professor Ahluwalia and directed to the USP Council’s executive committee.

The University of the South Pacific journalism newspaper Wansolwara and website collaborate with the Pacific Media Centre.