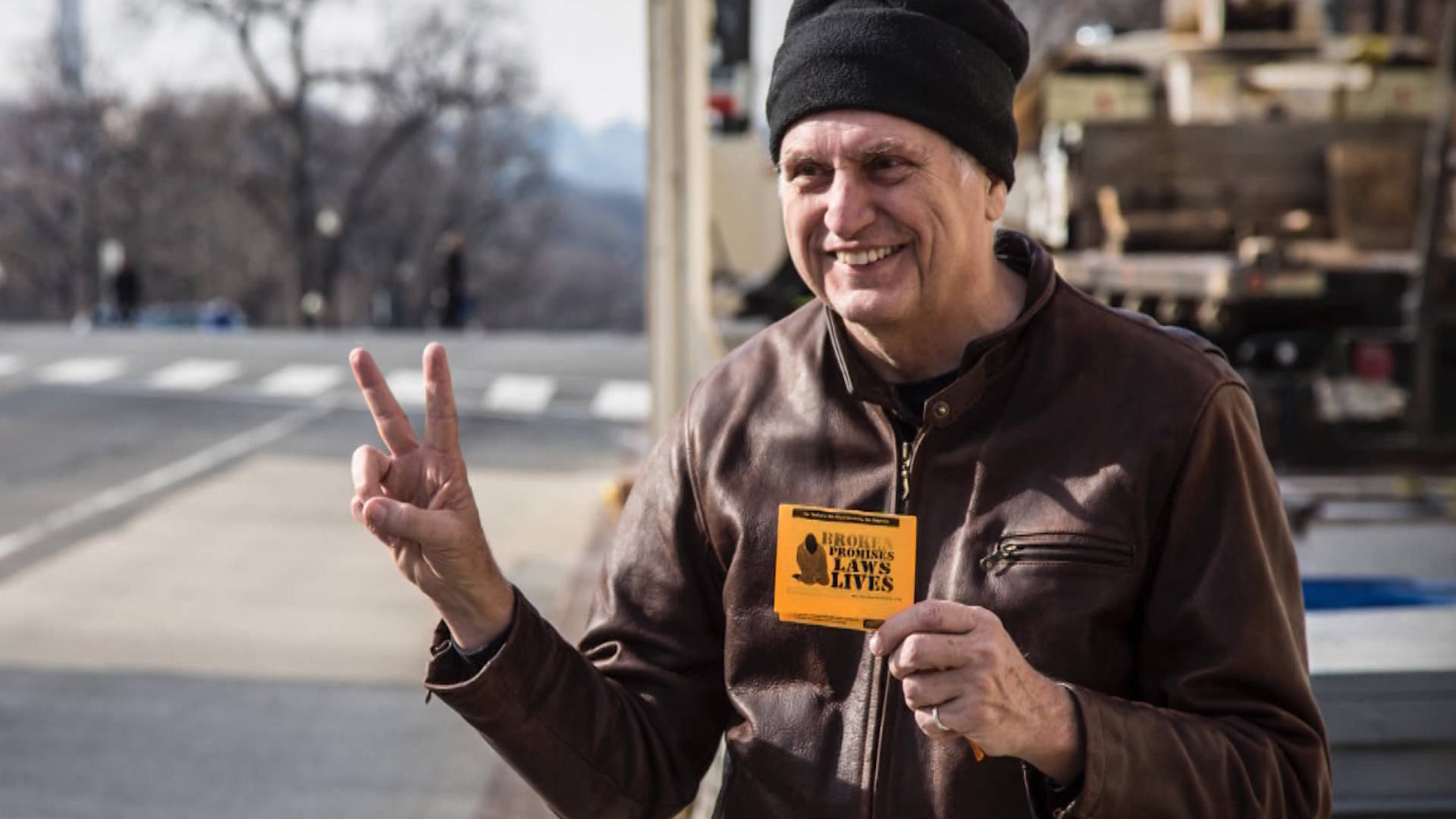 This is a rush transcript. Copy may not be in its final form.

AMY GOODMAN: This is Democracy Now!, democracynow.org, The Quarantine Report. I’m Amy Goodman, with Juan González. On Tuesday, President Trump made no mention of George Floyd’s funeral, nor did he send condolences to his family on the day that George Floyd was laid to rest. But he did take to Twitter to attack a longtime peace activist in Buffalo, where police officers assaulted him at a protest last week against the police killing of George Floyd.

In the video, recorded by a bystander, that’s now been viewed by millions of people, two police officers violently shove 75-year-old Martin Gugino to the ground as dozens of officers walk by, not one stopping to help him, as blood seeps from his head on the pavement. After widespread outrage, the two officers were charged with felony assault over the weekend, prompting 57 police officers from Buffalo’s Emergency Response Team to quit the special unit in protest.

Martin Gugino is well known in the Buffalo community for his years of peaceful protest, including as a member of Witness Against Torture, a group that’s long advocated for the closure of Guantánamo Bay. In his many years as an activist, Gugino has demonstrated against climate inaction, racism and nuclear proliferation.

On Tuesday, while President Trump did not mention George Floyd, he attacked Martin Gugino as he lay in the hospital. Trump tweeted, quote, “Buffalo protester shoved by Police could be an ANTIFA provocateur. 75 year old Martin Gugino was pushed away after appearing to scan police communications in order to black out the equipment. … I watched, he fell harder than was pushed. Was aiming scanner. Could be a set up?” Trump tweeted. Trump tagged One America News, a fringe right-wing media outlet that frequently amplifies conspiracy theories and has run multiple segments attacking Gugino since video of his assault drew national ire.

One Republican senator after another was asked to comment. While Mitt Romney did, saying it was ridiculous, other senators said, “We are weighing the information.”

For more, we’re joined by someone who protested alongside Martin Gugino for over a decade. Lu Aya is a part of The Peace Poets, a member of Witness Against Torture. He’s joining us from Oakland, California.

Lu Aya, it’s wonderful to have you with us. And if you can talk to us about Martin, talk about what his activism is all about, how you know him. And your response to President Trump’s completely unfounded, outright lying tweet?

LU AYA: Thanks so much, Amy. Thanks, Juan. It’s good to be with you both.

Martin, first and foremost, is just one of the kindest, most good-hearted people that I’ve been lucky to walk with. And so, this morning, as he’s still in the hospital, I just want to send him love and healing from here.

I was able to work with Martin with Witness Against Torture. Every January, we go there to protest the continued abuse of human rights in the prison in Guantánamo and demand justice for the people detained there. So, working with Martin has always been a joy. It is great to be able to tell people that he’s one of the amazing elders, that has always led with curiosity, creativity and courage in our community of Witness Against Torture.

And so, to be honest, Amy, I appreciate your question, but it’s hard to even justify a response to such a ridiculous tweet from President Trump. I feel personally that it’s important to, first, just say that Martin is someone who deserves, like all our elders, much more respect and care. And so I want to notice what the president of the country did not say. He did not say that it’s important for the police to respect elders, to treat people with dignity and care. And so, that, to me, in the face of having seen what happened to this friend of mine, who was pushed over — when I heard his head hit the pavement, I jumped toward the screen where I was watching it, just so I could try to help him, the same way that I feel like a lot of us respond to seeing these images of violence. And I just want to point out the absence of that, the absence of care and compassion for all our people, and especially for our elders.

And so, for Martin, again, someone who just always led with kindness, with love and respect, it’s really painful to see that lack of care, and, of course, see the opposite, the criminalization of dissent, and trying to create a narrative in which he is the enemy, which is really painful, because I know he was out there.

And I want to raise up Martin’s one response so far since the attack. And all he said was he wanted to be clear that his statement was Black lives matter.

JUAN GONZÁLEZ: And, Lu, I wanted to ask you — like many of us, we keep being astounded when we think that this president has reached a new low, but he always manages to find an even deeper low to drop into. I wanted to ask you about some of the work that you did with Martin at Witness Against Torture. What were some of the activities you were involved in together? And what drove him to be involved?

LU AYA: Yeah. So, the work that we would do is, every January, we’d go to D.C. for a week of fasting and action and prayer. So it’s really an — it’s an advocacy week in which we spend all day every day together thinking about the ways in which we can creatively express our outrage at the continued injustices perpetrated by our government. And so, our time together was really often spent in circles deciding how are we going to best do a creative action, and then going out into the streets of D.C., to the Supreme Court, to the White House, to express to the government, as well as to the people, the need for human rights in Guantánamo and all military prisons, as well as prisons throughout this country. And so —

AMY GOODMAN: I wanted to go to Martin in his own words. Martin Gugino recently submitted a video statement to a judge in Georgia presiding over the case of the Kings Bay Plowshares, the seven peace activists who broke into a nuclear submarine base in 2018. Martin quoted from the Reverend Martin Luther King Jr.

MARTIN GUGINO: It really starts with this quote of Matin Luther King that “The moral arc of the universe is long, but it bends towards justice.” What he doesn’t say there is that it doesn’t bend itself. We have to bend it. We have to go out into the culture and act justly, act morally, do good. And little by little, it will bend, will bend the culture towards justice. And some of the times, the culture doesn’t want to be bent, and so there’d be a conflict. And that’s just part of it. And Martin Luther King knew very well the possibilities.

AMY GOODMAN: Again, after being assaulted by police, Martin Gugino, who you just heard, is laying in a hospital bed. He was brought in in critical condition. I wanted to give you a chance to sing the song that you wrote, Lu, to share it with us now.

LU AYA: Thanks so much. This song, I really want to raise up that Martin did a lot to support that shifting of culture, and one of the ways is by supporting my crew, The Peace Poets. And unfortunately, this song is still so relevant. And I want to invite those who can —

AMY GOODMAN: We have less than a minute.

LU AYA: Thanks so much.

And right now across the country, I know that I can hear my people rising up singing this:

[singing] Defund the police
Give that money to community
’Til black people free
We are rising up in unity.

AMY GOODMAN: Lu Aya, thank you so much for being with us, member of The Peace Poets and member of Witness Against Torture. He protested alongside Martin Gugino for over a decade. That does it for our broadcast. I’m Amy Goodman, with Juan González. Stay safe.