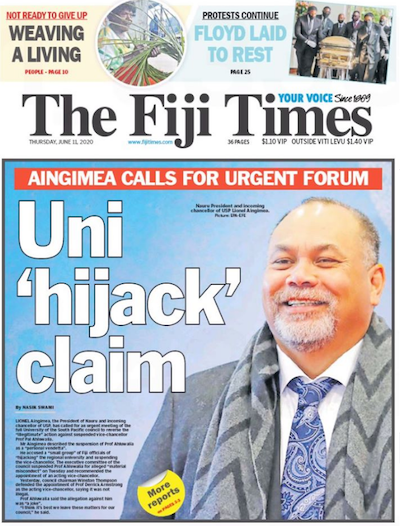 By Lena Reece in Suva

The Fiji government has denied allegations being levelled against it of trying to “nationalise” the 12-nation University of the South Pacific, describing the claims as “baseless”.

Fiji Minister of Education Rosy Akbar was responding to accusations made by some Pacific countries and individuals that Fiji was too heavily involved in this week’s suspension of vice-chancellor Professor Pal Ahluwalia pending an investigation.

Fiji hosts the main Laucala campus of the regional university.

A USP executive committee which met earlier this week had decided that the allegations against Professor Ahluwalia need to be “looked into”.

This arises from a report compiled by the chair of the risk and audit committee, Mahmood Khan, listing numerous incidents of alleged breaches by the USP vice-chancellor, Professor Pal.

Akbar said Fiji wanted to ensure that USP students – including those from Fiji, Solomon Islands, Vanuatu, Tonga, Samoa, Nauru and other countries – did not fall victim to issues created by bad governance.

She said a large number of complaints against the vice-chancellor had been brought to the attention of the USP audit team prompting the investigation, adding the quantity and nature of the complaints were very serious and could not be ignored.

The minister said the government remained concerned about USP, which continued to be “distracted from its core function” of delivering quality teaching and education needed by Pacific countries to build strong economies and prosper.

As a threat of students boycotting classes and exams continued, Akbar said students needed to remain focused on what was most important – their education.

She said that Fiji, as the host country with the largest number of enrolled students, and by far the largest contributor from the Pacific member countries, would like to see the matters resolved “efficaciously” through the internal mechanisms of the university.

Akbar said it was clear there was a need to address the “governance anomalies” which had disrupted transparency at the university.

The Fiji minister goes on to say that a university is a place of learning and office holders must set an example to students, the future leaders, that any breach of rules would be investigated using the proper channels with action taken if and as appropriate.

However, Pacific Media Watch reports that the incoming chancellor of the university, President Lionel Aingimea of Nauru, a law graduate from USP, had on Tuesday accused a small Fiji group, including pro-chancellor Winston Thompson, a retired former Fiji diplomat, of “hijacking” the university and waging a vendetta against Professor Ahluwalia.

He also said the future of the university was in “jeopardy” and he had called for an urgent special meeting of the full USP Council.

Other critics of the Fiji government’s actions over the university have also called for the meeting.

Staff and students in support of Professor Ahluwalia, who is widely seen as a reformer, have held protests at Laucala and other USP campuses around the Pacific.

He reported that some academics and staff at USP’s Laucala campus “have been paying themselves millions of dollars in salaries and allowances they may not have been entitled to”.

Lena Reece is a multimedia journalist with FBC News.