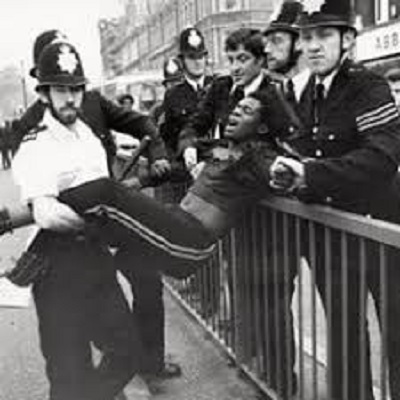 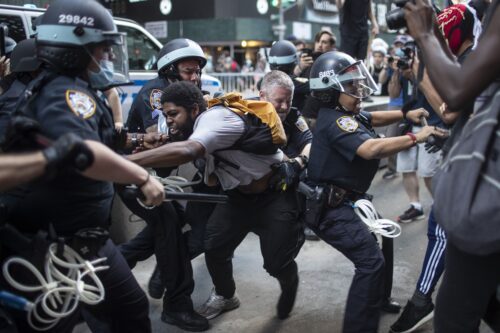 While it may be common knowledge that fire departments originated as private organisations to defend the interests of property insurers, it has probably been forgotten that in the US police were originally the hired gangs of landowners and merchant-industrialists. As urban conurbations like New York City grew, the police were the action arm of the political machines that served to dominate native and immigrant workers. A job in the police department was a patronage post; i.e., one either bought a job or by demonstrated willingness to act for the political boss(es) could be given a shield, a license to use violence and commit crimes on behalf of the machine or for personal gain as long as it did not conflict with the interests of the former.

In the expanding continental empire that became the USA, the rural police were either the auxiliaries of the slave patrols or the “deputised” vigilantes in the service of big landowners, railroads, mining companies or ranchers. Community policing, let alone “democratic” policing was never a meaningful part of the US political system. What has recently been condemned as corrupt and brutal policing is actually consistent with historical tradition of localised repression.

When in the so-called Progressive Era corporate cartels realised it was necessary to counter emergent mass democratic movements, the ruling elite began a process of “professionalisation”. This trend actually covered most of the West. Ideological catalyst for “progressivism” was the adoption of the ideas of Auguste Comte, best illustrated in the case of Brazil whose flag today is adorned with the motto of Positivism (and the Positivist Church) “Order and Progress”. The emphasis was on technocratic order, embodied in the military as an emerging scientific bureaucracy. Progress meant resisting democratic demands with gradual technocratic solutions.

In the US this meant professionalisation of local government and integration of the private/ partisan police forces into a permanent civil service. Thus the gangs of capitalists acquired protected status as part of the new, modern, professional government apparatus which rationally could counter the “irrationality” attributed to democracy, not least of which the horror of communists and anarchists among the immigrant population. In many US cities, this meant that the ethnic hierarchy became entrenched in the forces of “law and order”.  Irish came to dominate East Coast urban armies — later Italians were allowed to join. Blacks were excluded– also because one of the jobs of the police was control over Blacks and other racial inferiors in the labour force. Even today the major urban armies of the US Eastern seaboard; e.g., Boston, New York, Philadelphia, are dominated by Irish and Italian dynasties for whom the police force is also a cult. 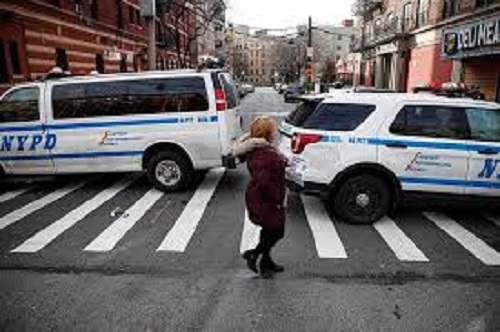 Not only was the struggle for democratic and socialist government subverted by imposing “progressive” public administration, these professional governments were equipped with private armies which were then given a badge and virtual immunity from any form of civil or criminal prosecution. Although some may know the history, it is important to recall that these policies were developed, supported and ultimately imposed by the plutocrats of the 19th century, Morgan, Rockefeller, Carnegie, later Ford and others both directly and through philanthropic foundations — established to evade taxes and distribute bribery — and make public policy at arm’s length.

Under Woodrow Wilson, that South Carolina racist and Princeton professor promoted to POTUS, the Pinkerton Detective Agency was essentially moved from its role as private and mercenary political hammer to a State apparatus.  Under A. Mitchell Palmer, who installed them under a fascist bureaucrat named John Edgar Hoover — who then turned it into the Federal Bureau of Investigation, the US equivalent of what Hitler established as the Reichssicherheitshauptamt (the controlling office for all Nazi political and criminal police forces).

The US Constitution does not provide explicitly for police powers — except in the Second Amendment. That infamous addition is usually interpreted as the right for anyone in the US to own and bear firearms. However, that is incorrect. The Second Amendment was adopted to protect the slave states from federal interference in their “slave patrols”, the militias organised under state authority to hunt runaway slaves, discipline slaves and prevent resp. suppress slave rebellions. In other words, the implied police power of the Second Amendment was conceived as an instrument for controlling slaves and later Blacks after slavery was abolished. This is the license that the Constitution gives to the thugs clothed in municipal or state uniforms as professional armies for the oligarchy that owns the United States.

After World War I those owners sought means to establish federal jurisdiction over political dissent, especially given the enormous numbers of urban immigrants from inferior European stock. People like Henry Ford realised that suppressing the consumption of alcohol would create a nationwide pretext for social control without openly contravening the supposed constitutional liberties; e.g., the First Amendment or those forbidding unreasonable search and seizure or denial of due process. The Volstead Act was adopted and the Prohibition amendment entered into force. For the first time since the Civil War, the federal government had a mandate to coordinate policing throughout the US and to mobilise the corporate machine police forces for political control. This not only made families like the Kennedys and Bronfmans fabulously rich, it helped establish the corporate form of crime of which Meyer Lansky became the paragon (although popular culture focuses on Italians rather than Jews).

The federal prohibition of alcoholic beverages did not end drink but created the context for a massive expansion of corporate and state police power. Now the taxpayer — obviously not corporations or their plutocratic owners — could pay the bill for their own repression. This would not have been possible were the US not historically saturated with the hypocritical theocratic culture of Oliver Cromwell’s puritan republic. Since “white” American politics — even abolitionism — has always been dominated by the theocratic tradition of the colonial era, prohibition of alcohol could be promoted as a necessary imposition of moral conduct upon inferior European stock — where wine and beer were ordinary food — and as a purification of the body politic. In fact, it was an alibi for political policing of immigrants, socialists, and any other “un-American” activities.

When it became clear that Prohibition’s days were numbered and an enormous army of uniformed thugs would suddenly be unemployed, people like Harry Anslinger, wed to the Mellon dynasty and a former head of the Pennsylvania Railroad’s private army, lobbied for the prohibition of narcotic drugs. One of his barely veiled reasons was that policing narcotics would also preserve an instrument for policing Blacks. So the Federal Bureau of Narcotics became the primary national race police while its senior rival the Federal Bureau of Investigation was the US secret political police (what was called under Hitler the Gestapo — abbreviation for Geheime Staatspolizei, as opposed to the Schutzpolizei or protective police).

Together these two federal agencies began the process of shaping disparate and independent warlords with their municipal armies into forces that could be mobilised either for political or racialist purposes. The so-called New Deal not only introduced a vast array of federal interventions in the economy and social organisation, some of which were barely socialist but most of which were proto-fascist/corporatist, it nationalised the police powers (and overseas subversion). This meant the corporations were no longer directly liable for the actions of their gangs; e.g., the Pinkertons, Ford Service or the numerous railway and factory police forces deployed to control workers and their communities. The uniforms and badges were exchanged and now these private armies were agents of state repression. The fiction of civilian control was preserved in part due to corporate and jurisdictional jealousies. However, these armies became entrenched parts of the civilian bureaucracy, unionised, and established legacies that made many forces virtually hereditary castes.

It is against this background that one needs to understand the decades of opposition to police in the US, mainly from non-white and poor communities in the US. This opposition is not based on occasional abuse or failures in training. It is based on the intuitively recognised fact that the police in the US — as in the rest of the US Empire — are an army of occupation. They are, individual police officers of good faith notwithstanding, the daily terror and threat of terror which is the complement to Hollywood propaganda and the dictatorship of the workplace. It is no accident that someone like Dan Mitreone, an Indiana police chief, became a notorious trainer of torturers in Latin American police forces before he was kidnapped and executed. Michigan State University ran, or served as a conduit for, programs throughout the US war against Vietnam which brought members of these municipal terror organisations to Southeast Asia to torture Vietnamese.

Of course, policing in Britain and throughout Europe is also derived from state terror policies. Yet only in Britain and the US does one have such an enormous investment in the myth of good police officers. The late journalist Alexander Cockburn once wrote that Britain had the only police department that was treated as a global tourist attraction. Hollywood has done everything possible to give the NYPD that reputation too — although even less deserved. FBI and DEA have become “brands” for leisure attire. Have you seen anyone wearing a “GESTAPO” tee shirt?

The current wave of demonstrations and demands for an end to police repression and even an end to the police force as such may shock some who think that it would be enough to end racialist abuse by the police, to finally convict police of the capital crimes they commit and punish them accordingly. In a country which is proud of its death penalty, the number of police condemned for murder and punished accordingly can certainly be counted on one hand — or less! The number of people wrongly convicted and/or executed for allegedly killing police gangsters is enormous. The City of Brotherly Love is infamous here.

The problem, of which the murder of George Floyd is only one example among thousands (or perhaps millions throughout US history), is complex. First of all, the warlords — the corporate owners of municipalities and their armies called police — have to be restrained. These armies, like the paramilitary units that same US corporate oligarchy maintains in its overseas protectorates, have independent means; e.g., through their control of drug, gambling and other cash flows. They can buy, blackmail or otherwise suborn politicians and judiciary. They are organised in powerful unions with cult-like loyalty through generations. They are supplied by the covert internal security apparatus established since Hoover’s ascent and enriched after the war on Vietnam and 9-11 — officially the Department of Homeland Security. They can rely on a perverse criminal code, both at local and federal level, which legitimates their functions. Last but not least they are integrated in the penal value chain since the privatisation of prisons and other disciplinary operations. There is so much money involved that it is mind boggling.

Although I remain sceptical as to the actual organisation(s) behind the wave of demonstrations and actions aimed at police forces and their crimes, the issues are real. An adequate and dialectically developing movement to address these long suppressed issues will need to deal with the complexity of police history and especially the powerful financial and political interests behind this municipal militarism that plagues the US and constitutes one of the main obstacles to democratic struggle there.