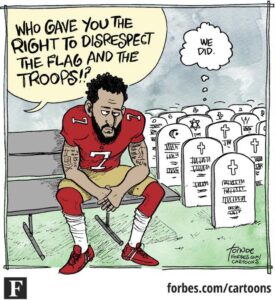 The National Football League is ruing the day it denigrated the peaceful protests by some players against police brutality and inequality.

The NFL commissioner Roger Goodell has been pushed to condemn racism and admit to being wrong for not listening to NFL players earlier. He encouraged speaking out and peaceful protest. He said Black lives matter. He said he will be reaching out to players who have spoken up.

What Goodell did not do is apologize. He did not mention the most prominent peaceful protester Colin Kaepernick. Kaepernick was at the forefront of promoting social justice among NFL employees and employers. Kaepernick had the vision that Goodell lacked. Is Goodell going to reach out to the player that has been blackballed by the NFL? Will he apologize to him? Will he see to it that Kaepernick is properly reimbursed for the years he was not employed? Goodell’s words ring hollow, with meaningful actions lacking.

Instead, Goodell aligned himself with a president accused of racism, a man slumping badly in the polls to the weakest of opponents that is beyond imagination, Joe Biden, a man plagued by his own racism and glaring cognitive deficiency. Donald Trump’s ire was evoked by the peaceful protests of some NFL (predominantly Black) players who were taking a knee during the playing of the national anthem. The protests were started by quarterback Kaepernick. Right-wingers, however, transmogrified the protests into disrespect for the flag and the US military.

President Donald Trump was outraged by the taking of the knee during the playing of the national anthem.

Said Trump, “Wouldn’t you love to see one of these NFL owners, when somebody disrespects our flag, to say, ‘Get that son of a bitch off the field right now, out, he’s fired. He’s fired.’”

Trump, a Tea Party favorite, seems unable to read the tea leaves. He blundered on mishandling police brutality and racism. Goodell and the NFL ownership (with the exception of Pakistani-born owner Shahid Khan who showed solidarity with his players against Trump’s insensitive bombast) were equally inept at reading which way the wind was blowing.

Colin Kaepernick is the man who recognized the wrongs in society that were there for all with eyes to see; he had the foresight to take action; he is the man equipped with a moral compass. It is time to put him at the forefront where he belongs and for the rest of the NFL owners to get behind him. If Goodell has an iota of decency, he will take a backseat to Kaepernick.

This article was posted on Tuesday, June 9th, 2020 at 6:49pm and is filed under Donald Trump, Racism, Sports.