The system based on a combination of police brutality, mass imprisonment, and evictions at gunpoint may be collapsing, but if it’s going to fall in the direction we want it to fall in, we need to push it that way.  And if we want to make that happen, we have to organize to stop the impending wave of evictions before it starts.

This society is at a crossroads in so many ways.  In recent weeks, a multiracial uprising in the streets of the US and other countries is demanding not more ineffective police reforms, but a total transformation of the concept of policing.  The ideas are not new, but the degree to which the notion of defunding the police has suddenly become commonplace is new.

The powers-that-be and the corporate media are very actively trying to frame the questions as narrowly as possible, at every opportunity, sticking as much as they can to rehashing useless reforms and talking about bad apples, better bias training, and so on.  They will avoid the elephant in the living room as much as possible, and do everything they can to make sure there’s a sufficiently complex set of mirrors surrounding the elephant so that we don’t see it. 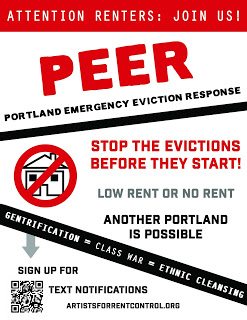 The reason they must avoid the elephant at all costs is because the horrifically unequal and unsustainable system of capitalism, this corrupt plutocracy that we live in, can only be held together through constant deception, and the threat of armed force and imprisonment.  Deception whenever possible, armed force and imprisonment whenever necessary.  When and to what degree the different strategies of control are employed depends on various factors, such as race and class.

Portland, Oregon, my home town for the past thirteen years, is the most rent-burdened city in the United States.  This was the case well before the pandemic.  Depending on the year, Portland also has the highest number of police killings of Black people in the US, per capita.  If these statistics might be related, I have no studies to cite, but there they are, anyway, these facts that stand starkly side by side.

Here’s another statistic:  in the United States we have a census every ten years.  A lot happens from one year to the next, let alone every ten years, but nevertheless, what is known for sure is that between the census in 2000 and the census in 2010, the city of Portland lost half of its Black population.  Since 2010 it has lost more.

There is no statistic to neatly measure the gains or losses for many other demographics, but this number can easily be assumed to be more or less representative in terms of the many artists and other lower-paid workers who have been forced to leave the city.  The process of gentrification — the process of investment companies buying up massive numbers of buildings throughout the US (and other countries) and then proceeding to maximize their profits by charging as much rent as the market will bear, while they create the market through price-fixing and buying most of the legislators in every state capital — is extremely disruptive, in every possible sense.  What this does to communities and to the lives of people within them cannot be overstated.  It can be called many things, but it is most certainly a vicious form of class war, and it is most certainly a form of urban ethnic cleansing.

This level of social disruption, this ethnic cleansing, this class war relies on many things in order to keep happening.  It relies on the consent of the governed to no small degree — it relies on most people believing they deserve their miserable fates, that it is their fault they can’t afford the rent or the mortgage, that if they just worked harder or got more education, they could achieve like those billionaires have done.  That’s the deception part of the equation.

But when circumstances start to become impossible, the deception gets harder to maintain.  And everyone knows, whether they believe the deception or not, that behind it lies the threat of force — of being beaten, shot, and/or imprisoned.  So, the movement to defund the police needs to be understood as the very radical idea that it is, since it would mean not just the prospect of Black people not having to worry about being shot by uniformed, paid employees of their town or city just for existing, but also the prospect of the investment banks that own much of the rental property in those towns and cities no longer having the option of sending the men with guns in to enforce the laws that they got their legislators to pass.  No more evictions at gunpoint.

What would happen, in a rent-burdened city largely owned by investment banks, when the landlords no longer have the threat of violence to fall back onto?  And what would happen if that police force is not defunded, and if the suspension on evictions currently in place in Portland is lifted, and if the landlords can start filing for evictions all over the city?  There are many unemployed people in this city (like this author) who have been rejected by the Employment Department, or whose unemployment money will soon run out.  There are many people in this city who were just barely managing to come up with rent before the pandemic, who were spending 70% of their earnings on the landlord every month.  There are many people whose credit cards were already maxed out before the pandemic hit, and many others whose credit cards are now at their limits — and they’ve been spending their money on nothing but food and rent.

Once the ban on evictions is lifted, we can expect the waves of evictions to begin.  They won’t happen all at once, however.  People who lost significant income due to the pandemic may be able to put the process off by six months or more.  The future is unwritten, and things are changing rapidly.  Lots can happen between now and the time that the city declares the crisis is over.

But for me and others of us artists that remain in the city of Portland, affiliated in the loose-knit network called Artists for Rent Control, it is clear that the time to prepare for the evictions is now, while they are still banned.  We say they should remain banned.  Without the threat of forced eviction — that is, without the threat of the police — tenant-landlord relations in society become very, very different.  But as long as the threat exists — or will soon exist once again — we need to be able to respond to it directly.

Doing so will require the participation of a certain cross-section of people in the city of Portland who really believe that another Portland is possible.  Who believe we can stand up to the corporations who would seek to enforce their ability to make obscene profits through their investments in the human need — and human right — to housing.  Who believe we can confidently condemn the system that has produced such deadly inequities — who can ask the question of the bankers that run this country:  what gave you the right to be our landlords?  How did it happen that we taxpayers bailed you out only a decade ago, and now you’ve somehow managed to buy the buildings we live in, and double the rent?  What kind of dystopia have we woken up in?  What sector of the matrix is this, anyway?

Artists for Rent Control does not make any claims to knowing the whole way forward here, but we know one thing:  popular education, community-building, and direct action are effective and important tactics.  The popular education part is helping people to understand that another world is possible.  This is the role of art in any social movement, along with the community-building that tends to take place anytime a public event involving music or other forms of artistic expression takes place.  The direct action part that our little group is initiating is what we are calling Portland Emergency Eviction Response (PEER).

The concept is well-worn and simple, in its essence.  You enter your phone number and sign up for text notifications.  When we get confirmation that an eviction is taking place, you’ll receive a text telling you where it’s happening.  You then drop whatever you’re doing, and head immediately to the address provided.  What happens next depends on the situation, and is impossible to predict with certainty, but the fact is that it is often the case that just a few dozen people showing up to an attempted eviction will cause the cops to give up and leave.

A successful movement to lower the rents, to impose rent control, to pressure government entities to get involved by buying buildings from recalcitrant landlords in order to turn them into housing collectives, must inevitably involve many people, many tactics, many approaches, just like anything else.  But this form of direct action has generally been an important element of any successful struggle between landlords and tenants.

What we need, and what the time may be ripe for, is a return to the kinds of tactics employed by the Anti-Rent movement in New York’s Hudson Valley in the 1840’s, to take one example.  The most important of the tactics was this one:  whenever the landlord sent in the police or some other armed group to try to seize the property of tenant farmer family, or evict them from their farm, the farmers would blow a tin horn, which would reverberate through the rolling hills of the region.  Within an hour or so, hundreds of other tenant farmers would show up — generally on horseback, wearing disguises, and armed.

For nine years of what became known as the Rent Strike Wars, the tenant farmers of the Van Rennsalaer estate did not pay the rent, and did not get evicted.  Though there were many standoffs between masked rent strikers and police, for nine years, not a shot was actually fired in either direction.  For nine years, every time, the police retreated.  I’m simplifying the story a bit, but in the end, the landlord was forced to sell his estate to the tenant farmers, and many progressive laws were enacted.  Our effort here is to revive the tin horns, in the form of text messages, but otherwise our hope and our belief is that by employing similar tactics, we may get similar results.  Our belief is that whatever might be coming next in the struggle for fairness, justice and equality in this unfair, unjust and unequal society, eviction abolition will be a first step in the right direction.