Why is this not an Emmett Till moment?

The quick, simple response is because the Democratic Party is where social movements go to die and this will be absorbed into their own conservative narrative.

The open casket for Emmett shocked the nation, the white nation that is. It was neither shocking nor surprising for the majority of black Americans. They’ve seen it all too often before, just not with the exposition that Mrs. Till orchestrated in order to shock the world with an open casket. Many would rightfully say the civil rights movement truly began with this horrific murder and necessary showcase.

Attitudes were different back then. Polite society (liberal whites) knew the black American was being treated unfairly but for many it was an acceptable situation. Of course, many people in the mainstream abhorred the treatments and fought along with their brothers and sisters to reign in the oppression. But for the longest time after Reconstruction, there was a status quo.

Lynchings rarely made the papers but how many editorials regularly railed against Jim Crow enough to change attitudes? All Americans had to deal with WW1, the booming 20s, the Great Depression, and then WW2. The plight of the poor and minorities was of little concern to all who held power, as it is in many ways still today, thanks to our capitalist system.

Then came the horrific killing of Emmett Till and the subsequent kangaroo court trial that acquitted the murderers. There were many sensational cases throughout the 20th century but often it involved either the rich and famous or those already of national fame, or infamy. There was Sacco and Vanzetti, Leopold and Loeb, Scopes Monkey Trial, Hauptmann’s trial for allegedly killing Lindbergh’s baby, Ethel and Julius Rosenberg, and a few others involving heirs and big name custody fights. When it came to the Emmett Till trial, race was the issue and the first of its kind to kindle the flames of social revolution or upheaval.

The brutal murder of George Floyd was very different. We won’t know until the trial, but it could very well be that race may actually have played a minor role. Chauvin knew Floyd and there was talk of bad blood between them, especially regarding pay at the club where both served as bouncers. And, yes, he may have had animus for him just because he was black. The reaction by the entire world, enhanced by an already existing Black Lives Matter movement, is clearly focused on race, as it should, and police brutality against all, as all are seeing how thuggish the police are to all protesters for social change, regardless of color. What we’re seeing is the conflation of the issue that the police are the greatest threat to civil society that specifically targets blacks and the poor, because they know they can get away with it, and the larger picture that the police primarily serve the interests of the wealthy, of property, and the economic system of capitalism that requires a substandard living for many to prevent any form of egalitarian society and true upward mobility for the masses. 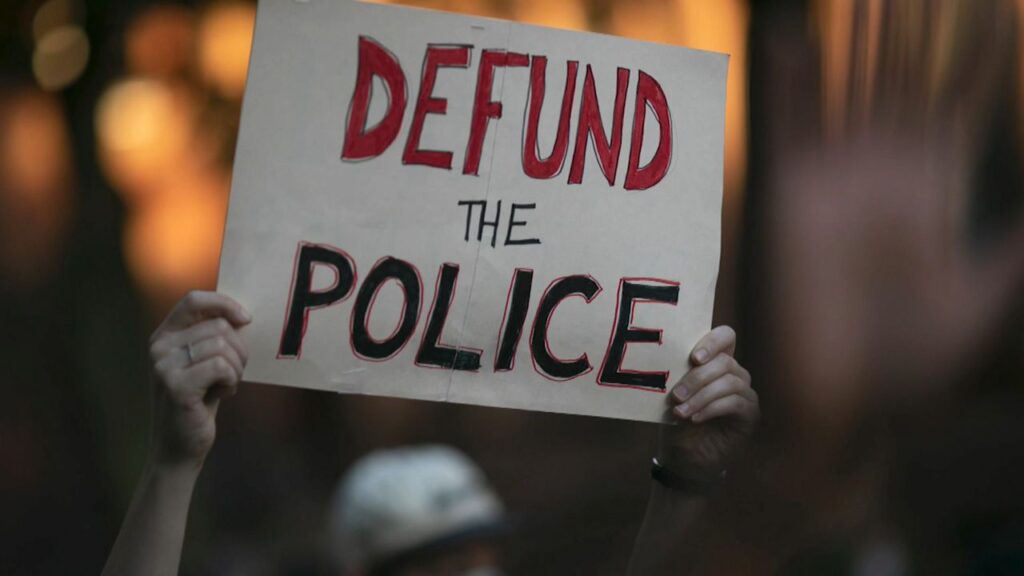 Many would say that there is a sea change. “Defund the police” is popping up everywhere. Billboards and buildings throughout the world, not just in the US, are defaced with this slogan. Racist statues are being taken down or torn down in larger numbers than before. Many go so far as to say abolish the police, and even the right wing, capitalist, war mongering paper, the New York Times, had an editorial arguing for its abolition. City councils are taking the defunding to heart. Of course, Minneapolis is the most prominent but we see it being proposed in, of course, Seattle, home of the modern day Paris Commune, known as the CHAZ, and Los Angeles, Chicago, New York, Detroit, Baltimore and DC now, etc. Almost sounds like “Dancing in the Streets”. Mayors are called to resign for supporting the police.

It’s very likely that there will be budget cuts and perhaps re-allocations of funds to social services that do a hell of a better job than police work in order to alleviate the causes of crime. But overall, that’s window dressing. Will training by Israeli IDF thugs stop? Will enough school boards nation-wide cancel their school police presence? Certain tactics might not be permitted, like choke holds and maybe even tear gas, a weapon outlawed by the Geneva Convention, but will they return their tanks and other weapons of war as to not appear as an occupation army?

At a protest, will they continue to be dressed for war? Will peaceful and unarmed white and black protesters be treated in the same respectful way as armed white, right wing, often white supremacists, protesters?

The icing on the cake is time. Time is ripe for revolution like very few times in our past. And it looks like our brothers and sisters in the streets have the upper hand. Considering that schools (public and universities) are out for the summer, there’s still a pandemic keeping people away from leisurely living, and so many are out of work, one would expect our American Spring to roll into summer. But there’s something else on the calendar which will kill the momentum. November’s election. With Bernie Sanders playing the dutiful role of sheepdog for the Democratic Party and giving up on the idea of revolution, and Trump becoming more insane by the minute, the focus of so many, including the protesters, might very well be centered on removing him. Like it or not, Biden will probably be the Democratic nominee and so many noses will be held as they pull the lever or mail in their ballots, just to remove Trump. It doesn’t matter that Biden opposes everything, including defunding the police, that the protesters demand. It doesn’t matter that his heroes are America’s past, notorious racists. It doesn’t matter that people are losing their jobs and health care and Biden openly opposes universal, tax paid, health care. And it doesn’t matter that so many black people are so threatened, not just by the police, but by the entire judicial system, that Biden past legislative history will be momentarily forgiven, just so that a Democrat can remove Trump.

It’s also very likely that more black Americans than ever before will refrain from voting for the Democrat, but strategically, they don’t really count all that much. The big cities with large black populations are in states that normally vote Democratic, but they are a minority within. Where they may be majority in certain cities are often located in the South, which would mostly vote for Trump, anyway. It is the white liberal, the suburban white moms, the Blue No Matter Who people, who will divert attention away from George Floyd and all the others, as they have been doing for so many years. And considering that many of these horrific murders before Floyd also happened under the Obama/Biden administration, with no long lasting consequences, it’s hard to see Mr. Floyd being the start of something real and long lasting. Maybe the rest of the world that has seized this moment in history will carry through to see that their demands are met. But as stated above, the Democratic Party is where social movements go to die. This is not an Emmett Till moment. It’s just another footnote in American history.

Myles Hoenig is a veteran of the Prince George’s County Public School system in Maryland, USA. He’s a long time activist for social justice. He lives in Baltimore. Read other articles by Myles.