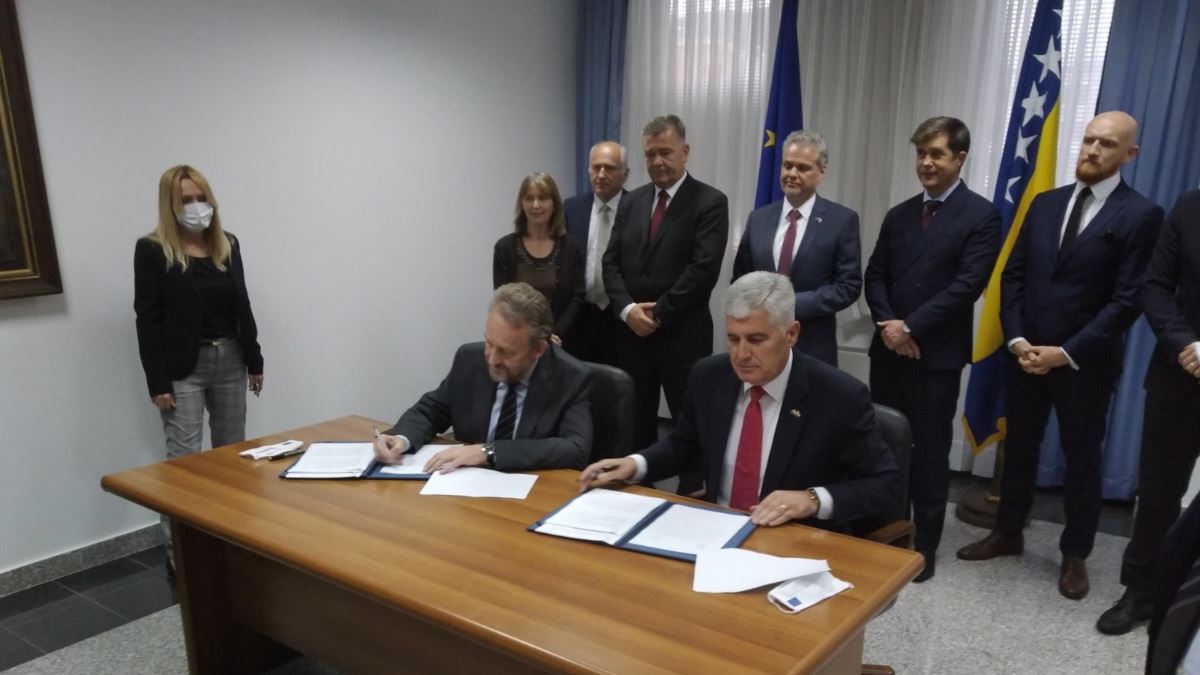 Bosnia-Herzegovina’s main Bosniak and Croat parties have reached agreement on a new statute for Mostar, paving the way for the first local elections to be held in the ethnically divided city in 12 years.

The deal was inked on June 17 by the leaders of the Party of Democratic Action (SDA) and the Croatian Democratic Union (HDZ), Bakir Izetbegovic and Dragan Covic, following several weeks of renewed talks.

The meeting in Mostar was attended by U.S. Ambassador Eric Nelson, British Ambassador Matthew Field, and the head of the EU delegation to Bosnia, Johann Sattler.

Izetbegovic said the deal on the new statute, which is to be adopted at the next session of the city council, foresees joint management of Mostar “because there is obviously no trust.”

Covic said Mostar will hold local elections on November 15, the same day as the rest of Bosnia.

He added that the two sides will now initiate a legislative process to change Bosnia’s electoral law.

Mostar, in southwestern Bosnia, has not held municipal polls since 2008 because of the authorities’ failure to enforce a 2010 ruling by the country’s Constitutional Court that said Mostar’s power-sharing structure was unconstitutional and needed reform.

In October last year, the European Court of Human Rights condemned Bosnia for its failure to change its election law and enable municipal elections in Mostar.

Ljubo Beslic, of the HDZ, has served as mayor of Mostar without a mandate since his term expired in 2013.

Mostar, with a population of more than 100,000 people, is divided by mostly Catholic Bosnian Croats in its west and mainly Muslim Bosniaks in its east.

Bosnia’s Croats and Muslims were allied against ethnic Serbs during much of the1992-95 Bosnian war but the two communities also fought fierce battles over Mostar and over other areas.

The city reflects the tense situation throughout the country following the war that left Bosnia divided into two autonomous regions — the Bosniak-Croat Federation and the mainly ethnic Serb Republika Srpska — united under a weak central government.