Two leaders of the long-running fight for environmental justice in Louisiana turned themselves in to police in Baton Rouge Thursday morning. The activists, who work in a part of the state known as “Cancer Alley,” faced charges of “terrorizing” related to a nonviolent protest action. Civil liberties attorneys are calling the charges a dramatic escalation of a yearslong effort by the fossil fuel and petrochemical industries to criminalize efforts to halt the expansion of polluting facilities in the state — part of a nationwide trend of cracking down on dissent around climate change issues.

The accusations against the activists, Anne Rolfes and Kate McIntosh, stem from a seemingly innocuous activist stunt carried out in December, the day after a festival designed to draw attention to the environmental misdeeds of Formosa Plastics. The Taiwanese petrochemical company plans to build a massive plastics manufacturing complex in a largely Black Louisiana community that has already suffered health problems linked to local industry. In October, Formosa agreed to a $50 million settlement for dumping pollutants, including the small pellets that form the building blocks for plastic products known as nurdles, into Texas’s Lavaca Bay — the largest settlement of a Clean Water Act lawsuit filed by private citizens.

With a key environmental permit still pending for Formosa in Louisiana, the action — dubbed “Nurdlefest” — was meant to pressure the state’s Department of Environmental Quality to scrutinize the company’s record. Boxes of the plastic pellets, used as evidence in the Texas case, were carted to the front of the agency, where around 75 people gathered in the rain.

What apparently terrorized community members, however, was a container of the pellets that appeared on the porch of an oil and gas lobbyist, with a detailed note attached, explaining what they were and their Texas origin. “We have delivered this package of nurdles as a reminder – Louisiana does not need anymore pollution, plastics or otherwise,” the letter said. “We demand that LDEQ DENY Formosa’s air emissions permit application.”

The letter was signed by Concerned Citizens of Louisiana and included the phone number of Bill Quigley, the activists’ pro bono attorney. It also included warnings against leaving the nurdles around children or pets and a Formosa phone number for safely recycling the contents.

Rolfes and McIntosh, who are respectively the director of and a program assistant at the Louisiana Bucket Brigade, which provides support to groups of community members living near polluting facilities, face a maximum of 15 years in prison and $15,000 in fines for so-called terrorizing — defined as “the intentional communication of information that the commission of a crime of violence is imminent or in progress or that a circumstance dangerous to human life exists or is about to exist” — with the intention of causing members of the public to fear for their safety.

“This is an unwarranted escalation because they are using the term ‘terrorizing.’ To use that word in a context like this is potentially damaging and chilling to others.”

“This is an unwarranted escalation because they are using the term ‘terrorizing,’” said Pam Spees, senior attorney with the Center for Constitutional Rights, who is representing McIntosh and Rolfes. “It is imposing unfairly and inappropriately a label on people that have been peacefully working for years to raise awareness of the impact of industry on frontline communities. To use that word in a context like this is potentially damaging and chilling to others.”

The charges against Rolfes and McIntosh come on the heels of a series of incidents where environmental activists have been dealt hefty charges for actions challenging the petrochemical, oil, and gas industries in Louisiana.

In August 2018, Louisiana legislators passed a law establishing a new felony charge for anyone who trespasses on critical infrastructure facilities, including chemical manufacturing facilities and oil and gas pipeline construction sites. Over the following couple months, police used the new law to charge 15 people protesting the oil company Energy Transfer’s Bayou Bridge pipeline. Local prosecutors have not yet acted on the charges. 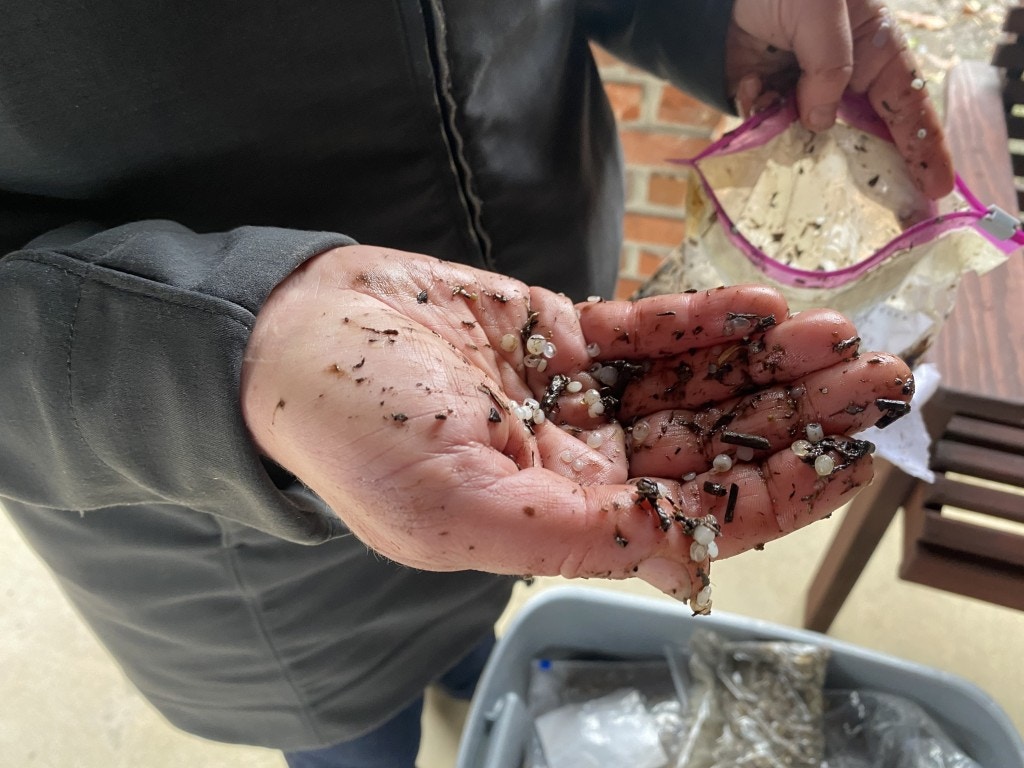 Taiwanese petrochemical company Formosa agreed to a $50 million settlement for dumping small pellets that make up the building blocks for plastic products, known as “nurdles,” into Texas’s Lavaca Bay.

Last October, police charged Gregory Manning, the legally blind pastor of Broadmoor Community Church and a member of the Coalition Against Death Alley, with a felony for allegedly inciting a riot. Authorities said Manning failed to immediately leave a hallway outside the office of the Louisiana Association of Business and Industry during a protest against the association’s influence over state politics. A prosecutor later dropped all charges.

This spring, legislators passed an enhanced version of the critical infrastructure law, which would have ramped up charges for trespass during a state of emergency. Louisiana Gov. John Bel Edwards vetoed the bill.

To Rolfes and McIntosh’s attorneys, the timing of the latest charges is particularly suspect. At 9:30 a.m. on Juneteenth, the June 19 holiday celebrating the emancipation of slaves in the U.S., Quigley — Rolfes and McIntosh’s pro bono lawyer, who is also a professor at Loyola University New Orleans — received a phone call from a Baton Rouge Police Department detective, notifying him that a warrant was out for the pair’s arrest. (Formosa and the Baton Rouge Police Department did not immediately respond to requests for comment.)

“It seems more than a little suspicious that this long dormant warrant was activated 12 hours after Formosa lost in court. It seems like it’s clearly retaliation.”

Both the activists were en route to a ceremony at a burial site for enslaved people, located in a field where Formosa plans to build one of its facilities. The right to carry out the ceremony had been hard-won: Formosa had fought in court for the past week to prevent community members from holding the gathering. A judge denied the company’s final appeal only the night before.

The detective told Quigley that the charges had been filed in April, but they’d held off on issuing the warrant because of risks associated with the coronavirus pandemic. “It seems more than a little suspicious that this long dormant warrant was activated 12 hours after Formosa lost in court,” said Quigley. “It seems like it’s clearly retaliation.”

Spees, the Center for Constitutional Rights attorney, said, “If there’s such a danger, why wait seven months and pick the day of a community celebration of its liberation from slavery to send that message?”

In response to the latest charges, local organizers are launching the Alliance to Defend Democracy to push back on the increasing criminalization.

“Five years ago — maybe three years ago — this kind of charge against an activist would have had an isolating effect. The movements are stronger now,” said Spees. “It’s an overreach, and it’s going to backfire.”