From RNZ Afternoons with Jesse Mulligan

New Zealand established its credentials as an independent small nation after the fatal bombing of the Greenpeace flagship Rainbow Warrior in 1985, says an author and academic who spent weeks on the vessel shortly before it was attacked.

On 10 July 1985, the Rainbow Warrior was sunk at an Auckland wharf by two bombs planted on the hull of the ship by French secret agents.

The event is often referred to as the first act of terrorism in New Zealand.

Dr David Robie, who is an AUT professor of journalism and communication studies, as well as the director of the university’s Pacific Media Centre, had spent more than 10 weeks on the ship as a journalist covering its nuclear rescue mission in the Pacific.

In 1985, Rongelap atoll villagers in the Marshall Islands asked Greenpeace to help them relocate to a new home at Mejato atoll. Their island had been contaminated by radioactive fallout from US atmospheric nuclear weapons testing in the Pacific.

Environmental journalism
“At the time I was very involved in environmental issues around the Pacific and in those days Greenpeace was very small, a fledgling organisation,” he tells Jesse Mulligan.

“They had a little office in downtown Auckland and Elaine Shaw was the coordinator and she was quite worried that this was going to be a threshold voyage. 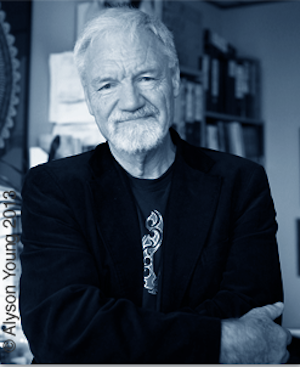 “It was probably the first campaign by Greenpeace that was humanitarian, it wasn’t just environmental – to rescue basically the people who had been suffering from nuclear radiation.”

Shaw, he says, was looking for media publicity on the issue and several journalists from Europe and the US had been invited on board as the Greenpeace crew carried out their mission.

“There were about six journalists who went onboard but I ended up being the only one from the Southern Hemisphere.

“It was a big commitment at the time because I was a freelance journalist and it meant joining the Rainbow Warrior in Hawai’i and being onboard until 10-to-11 weeks, right up until the time of the bombing.”

He says the 49m ex-fishing trawler, originally named the Sir William Hardy, built in Aberdeen, Scotland, had been comfortable enough at sea, having been refitted as an environmental sailing ship as well as engines. “It had a lot of character… I guess all of us onboard grew to love it incredibly.”

Moruroa protest planned
The US had carried out 67 nuclear tests at the Marshall Islands. France was also carrying out 193 tests in the Pacific and Greenpeace had planned on confronting that situation at Moruroa Atoll after its Marshall Islands rescue effort.

New Zealand had already voiced disapproval of the testing in the region, with then Prime Minister David Lange in 1984 rebuking the French for “arrogantly” continuing the programme in the country’s backyard.

Dr Robie left the ship when it docked in Auckland after the Marshall Islands stage of the mission. Three days after the ship had docked, a birthday celebration was held for  Greenpeace campaign organiser Steve Sawyer onboard. The attack happened after the party.

Just before midnight on the evening of 10 July 1985, two explosions ripped through the hull as the ship.

Portuguese crew member Fernando Pereira was killed after returning on board after the first explosion.

“I think it was an incredible miracle that only one person lost his life,” Dr Robie says. He was not at the party at the time and joined the crew early it the morning when he heard the news.

He objects to the prominent media angle at the time, which he says focused on suggestions it was not the perpetrator’s intention to kill anyone.

Two of the cabin crew were situated immediately above the engine room when the first bomb planted there went off. The second bomb was planted near the propeller to ensure the ship was hobbled.

Dr Robie had been able to visit the ship later after it had been towed to Devonport naval base.

“I was quiet staggered – my old [cabin] floor had sort of erupted, Fernando had a cabin right close to that and he probably got trapped there.”

Thirteen foreign agents were involved, operating in three teams. The first team brought in the explosives, the second team would plant these and the third was on stand-by in case anything went wrong with the first two teams.

“A commanding officer kept an overview of the whole operation. I think there was an element of arrogance, the same arrogance as with the testing itself. There was a huge amount of arrogance about taking on an operation like this in a peaceful country – we were allies of France at the time – and it is extraordinary that they assumed they could get away with this outrageous act.”

Two of the spies were caught. Two General Directorate for External Security (DGSE) officers, Dominique Prieur and Alain Mafart, were arrested on July 24. Both were charged with murder, pleaded guilty to manslaughter and were sentenced to 10 years’ imprisonment.

Repression of independence movements
“You have to see it within the context of the period of the time,” Dr Robie says.

He says that the French policy of repression against independence movements in New Caledonia and Tahiti, with assassinations of Kanak leaders like Eloi Machoro, needed to be understood to put the Rainbow Warrior attack in perspective. France was bitterly defending its nuclear force de frappe.

“New Zealand was unpopular with the major nuclear powers and there was certainly no sympathy for New Zealand’s position about nuclear testing. So, there wasn’t really any co-operation, even from our closest neighbour, Australia.

“Had we had more cooperation… we probably would have got agents who were on board the Ouvea, the yacht that carried the explosives, in Norfolk Island. But it is extraordinary we got two [agents] anyway.

“But we did not benefit in any way from [state] intelligence… so I think we were very much let down by our intelligence community.”

The case was a source of considerable embarrassment to the French government.

“They did pay compensation after arbitration that went on with the New Zealand government and Greenpeace. But justice was never really served… the 10 years were never served, both Prieur and Mafart were part of the negotiations with French government.

NZ was held ‘over a barrel’
“Basically, France had New Zealand over a barrel over trade and the European Union, so compromises were reached and Prieur and Mafart were handed over to France for three years. Essentially house arrest at Hao atoll, the rear base of the French nuclear operations in Polynesia.”

Dr Robie said the rear base was widely regarded as a military “Club Med”.

He says they didn’t even spend three years there, but left for France within the time period.

While the attack was on an international organisation rather than New Zealand itself, most New Zealanders saw it as an attack on the sovereignty of the nation

“It was a baptism of fire. It was a loss of innocence when that happened. And in that context, we had stood up as a small nation on being nuclear-free. Something we should have been absolutely proud of, which we were, with all those who campaigned for that at the time. I think that really established our independence, if you like, as a small nation.

“I think we have a lot to contribute to the world in terms of peace-making and we shouldn’t lose track of that. The courage that was shown by this country, standing up to a major nuclear power. We should follow through on that kind of independence of thought.”