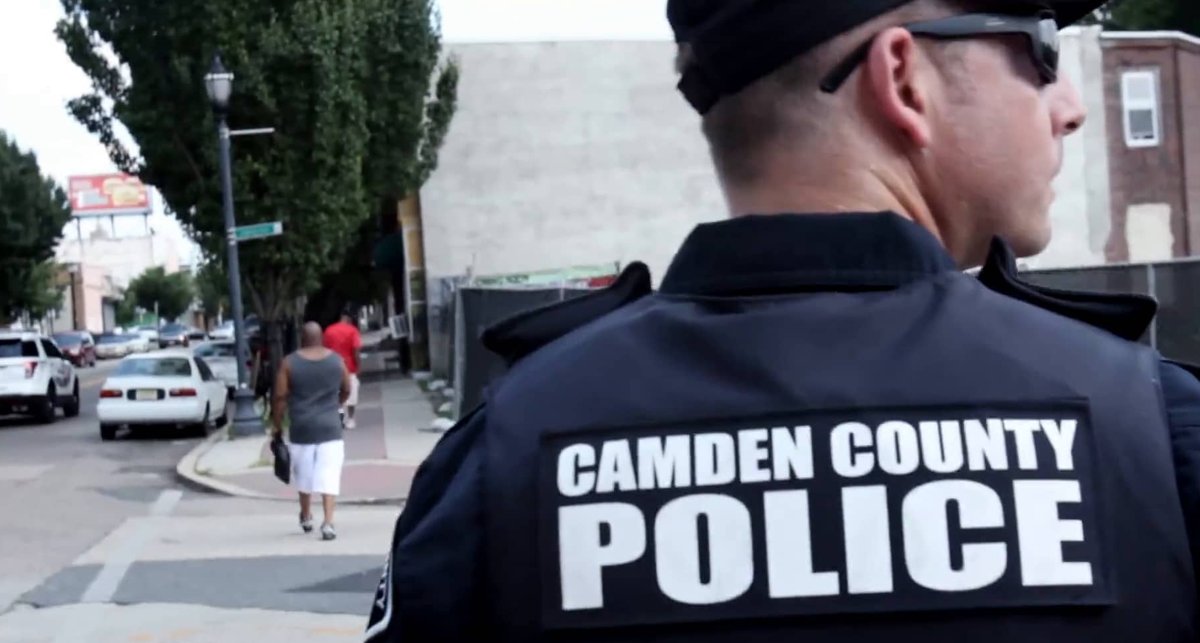 The city of Camden, New Jersey, once had a very bad reputation. As journalist Chris Hedges put it in his 2012 book, Days of Destruction, Days of Revolt, it was a city “beset with the corruption and brutal police repression reminiscent of the despotic regimes,” a place where:

“Large swaths of the city are abandoned. There are more than fifteen hundred derelict, gutted row houses. The empty shells of windowless brick factories, warehouses, and abandoned gas stations surround the city. There are overgrown vacant lots filled with garbage and old tires and rusted appliances. There are neglected, weed-filled cemeteries, and boarded-up storefronts. There are perhaps a hundred open-air drug markets, most run by gangs such as the Bloods, the Latin Kings, Los Nietos, MS-13, or Mara Salvatrucha.”

“Politicians can take a victory lap and say they’ve defunded the police while actually doing very little to address how those same concerns can be addressed by bureaucratic bodies that have less of a history of violence.”

Hedges and his co-author, graphic journalist Joe Sacco, went there in 2011, a fateful year in the history of southern New Jersey. A budget shortfall that activists say was purposefully exacerbated by former Governor Chris Christie and political leaders in South Jersey led to a mass layoff of police officers. The number of murders skyrocketed—from thirty-seven in 2010 to a high of sixty-seven two years later.

In response, the city did something drastic. It disbanded its police force and turned the policing responsibility over to Camden County. The county then created a new force that, at the time, was expected to replace other local departments in the county. Camden officers were fired. Many opted to apply for jobs with the new county force, with nearly all being hired.

The new force was larger than the original, and the county invested in a massive surveillance system, with hundreds of cameras now being monitored by law enforcement. It initially instituted a “broken windows” approach alongside a community policing initiative. Complaints increased, then fell.

The murder rate also fell sharply, as did the violent crime rate. Many outside the city saw what was happening as a miracle. A friend who attends college in Camden tells me she felt safer. Another friend tells me “it’s much safer now than it’s been.”

Both are white and both live outside of the city, but their experiences contribute to what some call the Camden Miracle, and it’s responsible for Camden suddenly being seen as a model for  “defunding the police.” But what happened in Camden was not a defunding at all; instead, it was a transfer of authority to what residents call the Metro—and, though Camden saw a drop in crime rates, so did other major urban communities in the state.

In Camden, factors having nothing to do with the police—such as the tearing down of public housing that had been used to house the city’s poorest and most desperate residents—have done more to create a somewhat safer environment, says Keith Eric Benson, the president of the Camden teachers union and an activist in the city.

“The reality,” he told me by phone, is that most of the current focus on Camden is “missing a lot of the peripheral things that do impact the crime numbers.”

While the city remains poorer than most of New Jersey—the median household income is just $27,000 and nearly 40 percent of households fall below the federal poverty line—the demolition of public housing projects and the redistribution of their residents throughout the region means that there are fewer people “who are in economically dire straits,” Benson says, which has an impact on the crime rate, as well.

Camden, he adds, remains the most dangerous city in the state, a reality that screams out for a different approach—one that addresses community needs as a way of preventing crime and “recalibrating your priorities” to focus on social services and community building.

The slogan “defund the police” is newly popular, having gained currency during the ongoing protests triggered by the May 25 murder of George Floyd by police in Minneapolis. Floyd’s death was another in a long line of incidents of police violence against Black people but seemed especially egregious.

Floyd’s murder called attention to the less-publicized but equally senseless killing of Breonna Taylor by police in her own apartment in Louisville, Kentucky. Police shot her eight times as they executed a no-knock drug search warrant, and then arrested her boyfriend, who had pulled and fired his own weapon in self-defense. No drugs were found in Taylor’s apartment, and the main suspect had already been taken into custody.

Protests erupted, with calls to abolish the police, defund local law enforcement, and transfer much of their responsibilities to other agencies. The goal of the defund movement is to reduce the size of the police footprint and militarization, to increase access to treatment for drug addiction and mental health, to provide more and better housing, and to address the extreme inequality that plagues most American cities.

That’s not what has happened in Camden. Stephen Danley, graduate director of the MS/PhD program in public affairs and community development at Rutgers University-Camden, says more money is being spent on policing now than it was before the city force was disbanded and policing authority was transferred to the county.

“The changes were framed by the period of austerity in 2010 and 2011, and also by Governor Christie’s interest in running for president,” Danley tells me. Christie had found a willing partner in a largely conservative South Jersey Democratic establishment, which he hoped to use to brand himself as a Republican who could work across the aisle. Camden, therefore, became a Petri dish for gutting police and teachers’ unions while expanding charter schools and disenfranchising local residents.

“Camden is not an effort to reduce spending,” Danley says. “It was an effort to increase policing. And you saw that very clearly, in the sense that the initial effort was driven by an effort to get more police on the streets.”

The shift to a county police force resulted in litigation. Activists sued the city and county, accusing them of ignoring residents’ concerns. They won in court, but the system was already in place.

Darnell Hardwick, former president of the Camden County chapter of the NAACP says Camden residents were disenfranchised by a City Council concerned only with gentrification of some neighborhoods and not a revitalization of the entire city.

Much of the national coverage has focused on the police, but activists say the Metro’s change in attitude was driven by aggressive activism. Camden has been characterized by “broken windows” policing, Hardwick adds, and that the community policing that is happening is mostly cosmetic. While the department has increased outreach—through barbecues and block parties, community meetings, and other interactions—Hardwick says “they’re for show.”

“They are just a way so they can do their surveillance program,” he tells me. “[These] are broken windows policies. That’s all it is.”

Sean M. Brown, an activist in the city, says the Metro came in as “warriors,” not as “guardians.”

“They were going after petty crimes, and those officers were very young,” he says. “They were very white. And they were from communities that were distant from where our community is from, which means they lacked the cultural recognition.”

Brown says the department has changed since complaints against officers spiked, that it is making “an ongoing effort to become better.”

“At the end of the day, I feel safer right now than I had in the past, because my last few interactions with the police gave me some confidence that things are improving in tangible ways,” he says.

Danley attributes the change to the growth of the Black Lives Matter movement in the city.

“Activists who had long been fighting against [broken windows] policing suddenly had a language that they could use to describe it,” he says. “There was a political power that emerged in the aftermath of the deaths of Michael Brown and Eric Garner and Tamir Rice and others. So you saw the police force take a step away from broken windows policing and then think about how to be less violent.”

“We’re not going to solve crime by ticketing petty crimes and adding expenses to an already impoverished neighborhood, by being overly punitive,” Brown says.

Police have a role in Camden and other cities, he adds, but “social services have an even more important role in fixing the over 300 years of discrimination and in exposing the flaws of capitalism.”

“In communities where the impact of trauma, institutional racism, sexual, emotional, and physical abuse from childhood, all these factors create communities that are in desperate need,” Brown says. “They need a combination of government, the social service sector, and the private sector for jobs.”

Nothing like this has been tried to this point. While there have been several small experiments—like in Dallas, which put police, paramedics, and social workers together to respond to mental health calls—but nothing on a much larger scale. And given the impact that COVID-19 business closures are having on local tax receipts around the country, Danley worries that governments might take advantage of the “defund” slogan and slash budgets as an austerity measure and not reinvest in services. That would leave a city that has a “police force that deals with homelessness to not having anybody that deals with homelessness.”

“Politicians can take a victory lap and say they’ve defunded the police while actually doing very little to address how those same concerns can be addressed by bureaucratic bodies that have less of a history of violence.”

If there are lessons from the Camden experiment, Danley says, it is that “progress can be made in areas with good policy.” But it is happening in the “wider context of broadly racist systems,” which make it hard for communities of color to trust the police.

“No matter how much you reform [the] police as an institution,” he says, “if it’s feeding into a system of mass incarceration, it’s feeding into a system in which people have engagements with the legal system early that impact their life later on and make them less likely to have positive interactions, are more likely to have fines or fees that eventually result in jail time, it becomes very, very hard to fix those structural problems with narrow reforms.”