Lying about world history is one of the main weapons of the Western imperialists, through which they are managing to maintain their control of the world.

European and North American countries are inventing and spreading a twisted narrative about almost all essential historic events, be they colonialism, crusades, or genocides committed by the Western expansionism in all corners of the globe.

One of the vilest fabrications has been those which were unleashed against the young Soviet Union, a country that emerged from the ruins of the civil war fueled by the European, North American, and Japanese imperialist interests. Foreign armies and local violent gangs were destroying countless cities and villages, robbing, raping, and murdering local people. But determined acts to restore order and elevate the Soviet Union from its knees, dramatically improving lives of tens of millions, was termed in a derogatory way as “Stalinism”. The label of brutality was soon skillfully attached to it.

Next came the Great Patriotic War (for the Soviets), or what is also known as the Second World War.

The West miscalculated, hoping that Nazi Germany would easily destroy the Soviet Union, and with it, the most determined Communist revolution on earth.

But Germany had, obviously, much bigger goals. While brutalizing Soviet lands, it also began committing crimes against humanity all over Europe, doing precisely what it used to do in its African colonies, decades earlier, which was, basically, exterminating entire nations and races.

While the United States first hesitated to intervene (some of its most powerful individuals like Henry Ford were openly cooperating with the German Nazis), the European nations basically collapsed like the houses of cards.

Then, the unthinkable took place: indignant, injured but powerful, enormous the Soviet Union stood up, raised, literally from ashes. Kursk and Stalingrad fought as no cities ever fought before, and neither did Leningrad, withstanding 900 years of blockade. There, surrender was not an option: people preferred to eat glue and plywood, fighting hunger, as long as fascist boots were not allowed to step on the pavement of their stunningly beautiful city.

In Leningrad, almost all men were dead before the siege was lifted. Women went to the front, including my grandmother, and they, almost with bare hands repelled the mightiest army on earth.

They did it for their city. And for the entire world. They fought for humanity, as Russia did so many times in the past, and they won, at a tremendous cost of more than 25 million soldiers, civilians, men, women, and children.

The world was saved, liberated. By Soviet people and Soviet steel.

The end of a monstrous war! Entire Soviet cities in ruins. Villages burned to ashes.

But a new war, a Cold War, a true war against colonialism, for the liberation of Africa and Asia was already beginning! And the internationalist war against racism and slavery.

No such narrative could ever be allowed to circulate in the West, in its colonies and client states! Stalin, Soviet Union, anti-colonialist struggle – all had to be smeared, dragged through the dirt!

That smearing campaign first against the Soviet Union and then against Russia was conducted all over Europe, and it gained tremendous proportions.

Mass media has been spreading lies, and so were schools and universities.

The foulest manipulations were those belittling decisive role of the USSR in the victory against Nazi Germany. But Western propaganda outlets also skillfully and harmfully re-wrote the entire history of the Soviet Union, portraying it in the most nihilist and depressing ways, totally omitting tremendous successes of the first Communist country, as well as its heroic role in the fight against the global Western colonialism and imperialism.

Since the end of WWII, Italy has been in the center of the ideological battle, at least when it comes to Europe.

With its powerful Communist Party, almost all great Italian thinkers and artists were either members or at least closely affiliated with the Left. Partisans who used to fight fascism were clearly part of the Left.

Would it not be for the brutal interference in Italy’s domestic politics by the U.S. and U.K., the Italian Communist Party would have easily won the elections, democratically, right during the post-war period.

Relations between the Italian and Soviet/Russian people were always excellent: both nations inspired and influenced each other greatly, particularly when it comes to arts and ideology.

However, like in the rest of Europe, the mainstream media, the propaganda injected by the Anglo-Saxon polemicists and their local counterparts, had a huge impact and eventually damaged great ties and understanding between two nations.

Especially after destructions of the Soviet Union, Italian Left began experiencing a long period of profound crises and confusion.

Anti-Soviet and anti-Russian propaganda started finding fertile ground even in such historical bastions of the Italian Left like Bologna.

With the arrival of the 5 Star Movement and the radical, traditional Left-wing fractions concealed inside it, the millions of Italian citizens began waking up from their ideological lethargy.

I witnessed it when speaking at the legendary Sapienza University in Rome, shoulder to shoulder with professor Luciano Vasapollo, a great thinker and former political prisoner.

I was impressed by young Italian filmmakers, returning to Rome from Donbas, arranging countless political happenings in support of Russia.

Rome was boiling. People forgotten by history were resurfacing, while the young generation was joining them. My friend Alessandro Bianchi and his increasingly powerful magazine, L’Antidiplomatico, were bravely standing by Venezuela and Cuba but also by Russia and China.

These days, very few Italians understand what happened during WWII. It is a tragedy, real tragedy…

And then, recently, L’Antidiplomatico informed me that it will be publishing, in order to celebrate the April 25 and May 9 anniversaries, an essential book put together by the Soviet Information Bureau, by the academics, with notes and inside information by Joseph Stalin. It was fired right after the end of WWII: “Falsifiers of History. Historic Information.” (In Russian: “Fal’sifikatory istorii. Istoriceskaja spravka.”) 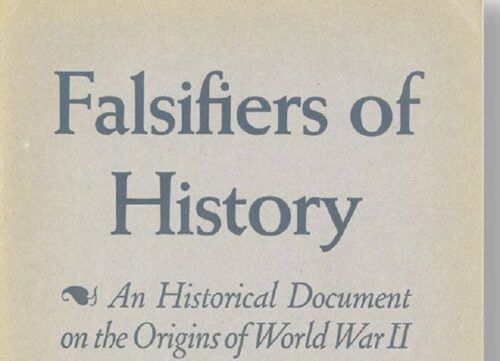 Now in Italian, the book will be called Contro la falsificazione della storia ieri e oggi (Fabrizio Poggi: Against the Falsification of History Yesterday and Today).

The powerful editorial work of Mr. Poggi is unveiling the truth and counter-attacking the Western Anti-Soviet propaganda.

Throughout this work, “The Anglo-American claims about the alleged Berlin-Moscow union against the ‘western democracies’ and a “secret pact between the USSR and Hitler to divide all of Eastern Europe” were clearly dismantled. The falsity of the rhetoric which is repeatedly used today in virtually all Western countries is exposed here, step by step.

The translation presented here is preceded by an introduction, edited by Poggi himself, which mentions the main issues of the period before the Second World War: Polish-German relations, the role of France and Great Britain and their relations with the USSR, Munich Conference, etc., all used by Western propagandists to advance the theory of “equal responsibility” of Nazi Germany and the USSR for the outbreak of the Second World War.

I asked Mr. Bianchi about the main purpose of launching the book in Italy, and he answered without hesitation:

To defeat the anti-Soviet propaganda and also propaganda related to the Second World War.

In many ways, Fabrizio Poggi’s “Against the Falsification of History Yesterday and Today”, is not just a book. It is a movement, which will consist of discussions, lectures, interviews.

Top Italian intellectuals will, no doubt, participate. Many essential topics will be revisited. The truth will be revealed.

This could be a new chapter in cooperation between the Italian and Russian thinkers and progressive leaders in their common struggle for a better world!