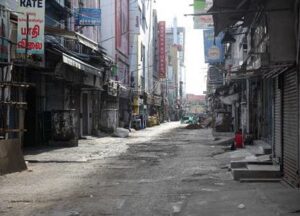 A view of deserted Ranganathan Street in Chennai on June 23, 2020. Hindu Times

At times, states compete to showcase merchandise and relative productive capacities. Other times, many of these states sell misery to gain access to economic packages, charities and loans. Today is the time when they compete to show off their capacity to impose the most efficient lockdown on their citizenry. Of course, the priority is to make this imposition consensual, because that would showcase the self-discipline of the national workforce. But if that doesn’t work, then the dosages of coercion are streamlined to measure the states’ disciplining capacity. The Narendra Modi government’s chest-thumping claim to run the “world’s biggest lockdown” was to showcase the realization of the neoliberal ideal of a “strong state” in India — the carrots-and-sticks hidden behind the quinine-and-quarantine lockdown.

The Story of India’s Lockdown

With the absence of any coherent public health system, in the nationalist war against the “Chinese virus,” India has been relying on the dedicated medical workforce of much maligned public hospitals fending the virus without sufficient protection and supplies. Of course, popular pseudoscience is also there, factoring in a hot summer and the cumulative impact of other vaccines etc, along with the placebo effects of the homeopathic recipes.

Even with regard to the so-called practice of “social distancing” and its generalization through the lockdown, much was left to the play of the complex and sinister traditional divisions — such as caste and communal divides among others — within the Indian society. One can speculate that this factor might have played a role in the slow expansion of the pandemic in India.

However, it goes to the credit of supposedly the most vulnerable in India who called the Indian state’s bluff, making its rhetoric of a successful and strong lockdown evaporate into thin air. The migrant’s faint cry to be allowed to go back home became a collective roar, and a long march in defiance of the strictures and coercive forces ensued.

We are witness to a process of how the vulnerabilities of the weakest become their strength; how their weak actions lead to a legitimation crisis of the state (and also at many times capitalist crisis in general). It is not very difficult to see how existential defiance of India’s migrants and the working class in general unraveled the neat choreography of the lockdown, making it meaningless. The exodus of internal migrants (India’s “biggest intangible assets” and “India’s real economic dynamo: a silent force“) and the anticipated volatility in the labor market have made capital jittery.

The Narendra Modi government, with President Trump’s encouragement, was already planning to catch companies flying away from China. The labor laws were being derailed to clear the way. But nobody heard the plates shifting — the lockdown just couldn’t lock the workers in! Their footlooseness, which was the biggest asset, has become a great liability now.

The Liberal Politics of Victimhood and Representation

The tremors were felt everywhere. The state was trying to control the damage desperately by providing buses, rations, and identifying potential stars in children, cycling hundreds of miles carrying their parents. On the other hand, the sensitive gentry could see the faces of orphans whose parents died in an accident while cycling 750 kilometres back home, or see blood splattered on the railway tracks.

In a recent article in The Indian Express, one of the most sensible political scientists in India, Suhas Palshikar, expressed the angst of the majority of the self-acclaimed politically conscious people on the side of left and liberals. He lamented “the incongruous image of the politicians and the political party” — they talk of the people but “betray an instinctive choice of ‘law and order’ and a techno-bureaucratic idea of governance”. It seems they are “on a holiday” and abstaining from politics. At the time when the central government is “caught in the trap of regulation and denial,” and “beset with uncontrollably delusional self-belief”, the opposition forces should have taken the initiative to “come up with a robust alternative route to governance” (of course, Kerala is already showing the way!).

According to Palshikar, there should be “a political response to the pandemic,” for which “resumption of democratic contestation is a must”, since “politics alone can be survival therapy for democracy.” He advises the Congress and its leadership to ask the party workers “to hit the roads, talk with suffering workers, walk with them”, only then they would “realise that taking a stand also means mixing with the people.”

Palshikar’s plea for the “resumption of democratic contestation” may seem inspiring at the time when there are so many people who are left uncared-for during the pandemic. It might motivate the opposition to see a political opportunity here, and the government too might see their pragmatic mistakes. But there are many assumptions on the basis of which such a plea is made. It seems Palshikar and, with him, most liberals and leftists in India assume that there is never a democratic agency of those who are surplused by the system, as there is no political agency beyond the legitimate state apparatuses — institutional and ideological.

With the WHO’s recognition of Covid-19 as a pandemic, the governments did what they are always good at when they are forced into action, i.e., to reach out for coercive measures. In the absence of vaccination and any understanding of the infecting germ, these measures take the form of imposing ancient “tribal traditions” of prevention (as J.D. Bernal used to call them) — social distancing, isolation and quarantine. But the liberal conscience, represented by Palshikar and others, demands an official opposition which will act as a corrective to this coercion.

The Real Opposition beyond Spectacular Politics

What happened instead is something, which, though, is not very uncanny in history, but, generally, goes unseen and unrecognized. It is accounted only in a retrospective reading of the people’s history. It happens beyond the spectacle of formal politics, which doesn’t have any category to capture this phenomenon in its positive grammar, except as a subaltern that never speaks.

The wails of pain, agony and anger of India’s internal migrants and workers in general have shattered the adamantine chains of the lockdown. The lockdown was never successful except in the ritualites of the already cocooned little bourgeois within everyone (meaning, everyone individually or as an aggregate of individuals). We found the appropriate nuclear environment of safety and discipline, and sang the “Middle Class Blues”:

The streets are empty.
The deals are closed.
The sirens are silent.
All that will pass.

Among the working masses, the lockdown as a generalization of “social distancing” was anyway meaningless, and its imposition amounted to an outrage. They felt what they are —surplus-ed and other-ed.

There are talks about the consolidation of the state and the rise of authoritarianism, but it is seldom recognized that this is a result of the exposed weakness of the state, its inability to regulate workers’ self activities and, especially, the panic and fear that they instill among other classes. Those who see these workers only as victims, which they are in the legitimate framework of political economy, are unable to see the organic resistance of the workers to the systemic regulation.

What argumentative liberals and online radicals couldn’t achieve was accomplished by the synergistic effects of the “weapons of the weak”. In fact, they are still waiting for the powers who imposed the lockdown to end it, so that, once again, they are able to lead these victims of the system back to the normal systemic cycle —some want them to fulfill their duties, and some, mainly those who are on the side of the left, would want them to struggle for their rights. What an irony!

There is nothing to celebrate here, but everything to understand — in order to imagine a new politics organically grounded in the everydayness of working class resistance.

This article was posted on Friday, July 3rd, 2020 at 8:45am and is filed under COVID-19 (coronavirus), Democracy, Health/Medical, India, Migration/Migrants.