Jenelyn’s battered lifeless body was taken into the Port Moresby General Hospital last Tuesday by four men (one believed to be the father of her two children).

Dr Sam Yockopua, the country’s chief of emergency, took to social media his outburst on what he described as “an inhumane act and work of the devil” after seeing her body.

READ MORE: Background and reports on gender-based violence in PNG

The media went to town with her story the next day and the Friday photograph of her battered body by The National (with permission from her family), we believe is the turning point of enough is enough.

We defied media ethics by publishing that photograph but it had to be done to drive home the message of violence is rampant in our society.

Her story needed to be told.

Though she is not around to tell it, her voice needed to be heard and that picture was used to ensure her voice was loud and clear and to also awaken the authorities and the country to the realities of gender-based violence (GBV).

Due to feelings of isolation, fear, and intimidation, many people do not speak up if they are being abused at home.

They live in fear, and therefore do not get the help that they need to get out of their current situation.

The brutality of her death has shaken the country and has not put authorities on the spot with their lack of pro-activeness in getting the GBV system working efficiently. Her story, we believe, will give victims some hope of reaching out for help and one day to speak about it.

It was a wakeup call for citizens to realise the horrific realities of GBV so they can check on their daughters, sisters or friends and help them get out before it’s too late, and so much more.

The march yesterday, with the many who wore black around the country and the evening vigil is a sign of togetherness to denounce violence against woman and to shine the light on the help system for victims. 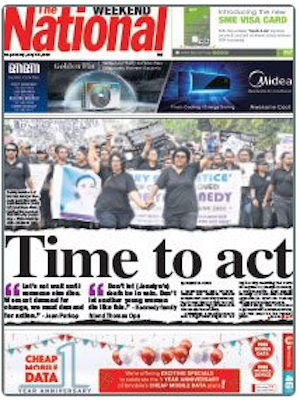 Placards bearing her name and other victims, and slogans to ending violence were displayed.

Far too often, GBV cases covered by the media gradually gets swept away.

Domestic violence does not discriminate. It exists in households of every socio-economic status, and every ethnic and cultural background.

It is often used as a weapon of control and intimidation by a partner, spouse or ex-spouse.

Her death sparked public outcry – justice for her and all victims and to put an end to violence. It shone a light on the failing GBV help system. Institutions are now responding.

Strengths and gaps within the current system are now being identified and we hope those responsible will do what is needed to improve and correct it as we move forward.

All concerned stakeholders have the responsibility now holding each other accountable so we are on the right track.

The PNG National Strategy to Prevent and Response to Gender Based Violence 2016-2025 is there. Let us move forward on a strong course of action that protects and supports victims of domestic violence.

The bottom line is we want to put a stop to domestic violence – before it ever begins.
Everyone – government, police, lawyers, social services, health-care professionals and other community partners – has a role here.

It is our collective responsibility to stop the violence.

This National editorial was published in the weekend edition, 3-5 July 2020.