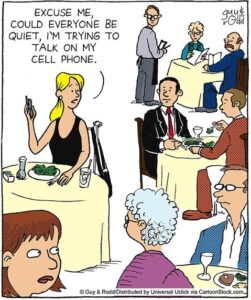 Though most consumers don’t seem to realize it, visiting a restaurant places them on a public stage where their true natures are readily on display. People often shed their facades when dining out, exhibiting behaviors they normally wouldn’t dream of doing at either their own places of employment or other social settings.

And that’s usually where the fun begins.

The way we publicly nourish ourselves is often a microcosm of both social nuance and elevated douchebaggery. And should you possess either a learned or inherent penchant for pretense, here then is a guide to assist you in standing out from the mundane culinary crowd the next time you visit your favorite eatery.

Pretend You’re Eating At Home. Our booths aren’t La-Z-Boy recliners for you to rest your shoeless feet on, no one is interested in the impressive decibels you can generate with your belching, our chef’s daily special isn’t designed for you to recreate based on your personal taste preferences, we’re not going to reconfigure our beer selection based on your zymurgy knowledge and no one within earshot cares what’s currently playing on your iPad. We do what we do – this is how we make our living – and you can either fit in or GTFO.

When All Else Fails, Claim Friendship With The Owner. Trying to goad or threaten me into preferential treatment based on the delusional relationship you’ve convinced yourself you have with the owner of where I work is about as effective as a Jehovah’s Witness knocking on my door at seven AM. Our owner may have “befriended” you along with the several other thousands of patrons who pay his mortgage, but he depends on me to make you happy enough to keep coming back and contributing to his lifestyle…A fact he’s well aware of, I assure you.

Brag About How Much You Intend To Tip Before You’ve Even Ordered. Genuinely wealthy people are usually the last ones to tell you how rich they are because, quite frankly, they’ve already arrived and don’t have anything to gain by merely announcing it to every service worker they encounter. Coincidentally, it’s usually either the wealthy-wannabes or pretentious dinglewads who attempt pre-service bribes that inevitably end up being 10 percent pots of mediocrity at the end of their faded rainbows.

Leave A Religious Tract As A Tip Instead Of Money. Contrary to what your proselytizing conscience may think, I can’t pay my rent with the love of your Jesus. However, your 20 percent offering makes me shout a soulful hallelujah every damn time.

Allow The Rest Of Us To Enjoy Your Offspring. Your children may possess the sort of hidden knowledge of the universe that would make even Stephen Hawking piss himself, but if they’re throwing crayons and busily running through the bar while you use the rest of us as the babysitter you’re too cheap to pay for, then they’re inevitably doomed by the tarnished gene pool that is you. The only person in the room who is enamored with your kids is you…And their public behavior is a reflection of the parenting skills mom and dad does or doesn’t possess.

Give Your Cell Phone Priority Over Your Server. Your personal technology hardware and a successful full service restaurant experience go hand in hand like a Nazi memorabilia merchant at a Black Panther convention. So when I show up to take your order put down the smartphone, Captain Fakebook, or be prepared to bitch about the shitty service you’ve obviously come to pay for.

Don’t Help Out. If I’m your server and walk up to your table with my hands full of hot plates containing the food you ordered while you sit there watching me scald myself without moving your bread plate or wine glass that’s in the way of my being able to set your meal down, then you deserve the au jus I accidentally allow to drip onto your lap. Whatever you do, never be afraid to save yourself by participating in your own dining experience.

Leave Unnecessarily Unhappy. Restaurants don’t stay in business by pissing people off, and if you have a genuinely bad experience any reputable establishment will go out of its way to rectify the situation on the spot as long as you speak up at the time. If, however, you phone the restaurant the following day to bitch about the overcooked steak you had the night before, then you risk falling into the same category as the other gift-card-seeking swindlers who come panhandling for handouts after the fact.

Try To Eat Without Spending Any Money. As amazing as it may seem to some consumers, for-profit restaurants aren’t synonymous with food banks. We’re not a grocery store with double coupon days, we’re on the constant lookout for charlatans trying to buy gift cards with credit cards not issued in their name, we’re schooled in the nuances of counterfeit currency, we don’t buy in when thieves try planting foreign stuff in their food and we’re not interested in you claiming food sickness 10 minutes after consuming the most expensive thing on the menu…So don’t waste our most precious commodity with any of this bullshit – our time.

Begin Any Complaint With I Eat Here All The Time. Trust me…I work here five to six days a week, anywhere from 30 to 60 hours a week – depending on what business and managerial overtime tolerance allows – and I pretty much have a grasp on who comes and goes. If your definition of all the time borders on once every six months, I suggest you reserve the beginning of your negative assertions for someone more susceptible to purchasing the pretentious crapola you’re peddling.

You Don’t Have To Go Home, But You Shouldn’t Stay Here. Restaurants are havens for anyone in celebratory, reunion, relaxation or mourning mode – and there’s always the temptation to lose track of time after the last bite is eaten and the final sip downed. However, restaurants and the people they employ rely on table turns to pay their bills, and that means you screw with people’s livelihoods when you sit there discussing the sort of shit two hours after you’re done eating that you could just as easily do elsewhere.

Insist On Using Expired Coupons. Promotions are enticement carrots designed to lure you through the door, and your showing up late to the discount party doesn’t entitle you to the same benefits as the people who arrived at the show on time. The beautiful thing about expiration dates is that they don’t discriminate, and insisting on using an expired coupon is a little like demanding a band restart their concert because you couldn’t make it to the gig until three songs in.

Propose Unreasonable Solutions. Should you unfortunately discover a hair in your lasagna that isn’t yours or lipstick on your wine glass that doesn’t resemble the shade you’re wearing, most restaurants will to the right thing by replacing the offending item and removing it from your bill. But those things also fall under the shit happens culinary category, and your assertion that everyone else at your table should also eat for free due to the mishap you experienced should be met with the appropriate indifference your shyster ass deserves.

Use Yelp As An Extortion Vehicle. Threatening a server or manager with a negative Yelp review unless your over-the-top demands are met is as douchey a move as demanding a full refund from a retailer while attempting to return a worn prom dress you never had any intention of keeping in the first place. If your “reviews” are little more than retaliatory tantrums when your hubris is met with indifference, then you automatically become the front runner in the most pathetic person on the planet contest.

Claim That Your Half-Eaten Meal Isn’t To Your Liking. The only thing worse than trying something you’ve never had and returning it because it “doesn’t agree with your palate” is to eat half your meal before deciding you’re not going to pay for it. And don’t even think about asking to take the uneaten portion home “for your dog,” you scamming cheapskate.

Attempt To Make A Reservation On The Actual Day A Holiday Falls On And Throw A Fit When You Can’t. If you wake up on Valentine’s Day morning and remember you forgot to actually make the reservation you promised your significant other, then you deserve the self-imposed hell you’re about to burn in. And all the complaining, whining, bitching, yelling, crying and threatening you’re capable of won’t magically let you cut in line to save you from your negligent ass.

Show Up Five Minutes Before Closing And Pretend Like It’s Five PM. The one thing restaurant workers always want to know is where the entitled sewagefactories who show up at closing time work themselves, keeping us here far longer than we would have had they had a modicum of courtesy by either arriving earlier or coming back another time. Because we would like nothing more than the opportunity to return the fucking favor at our collective convenience.

Complain How Much The Restaurant Sucks When You Keep Returning Every Week. Some restaurant patrons approach repeat bitching as if they were logging frequent flier miles for every nonsensical gripe they’re capable of generating. Consider this, though…If you continually frequent a place you claim is sub-par at best, then you’re going to get a well-earned reputation with the staff for being the guy who regularly rubs elbows with either sadism or psychosis.

Blame Other People For Your Own Stupidity. If you order the Zinfandel and the waiter brings you a glass of red when you clearly meant white, it isn’t his fault that you either didn’t know the difference or clarify your choice. Consequently, asking questions about menu items you’re unsure of is always preferential to pretending you know what you’re ordering…Especially if you get freaked out when your escargot unexpectedly resembles snails.

Treat The People Serving You Exactly Like You Wouldn’t Want To Be Treated. If you ever want to see the true character of a person, watch the way he or she treats the people placed in positions of serving them. If you’re the finger-snapping, condescending, rude, entitled self-engrossed nobmountain who gets his jollies ordering minimum wage workers around who can’t fight back, then we’re all rooting for karma to thump you back with the horribly prolonged cancer-ridden death you so richly deserve.

Act Like You’re The Only Person In The Room. If every time you visit a restaurant you find the temperature too hot or cold, the music too loud, the parking lot too crowded, the people sitting at the table next to you making too much noise, the staff not attentive enough and the entire restaurant in need of remodeling – then here’s a simple suggestion: eat the fuck at home.

Don’t Give Yourself Enough Time To Eat. Do yourself and everyone around you a favor and plan your special events accordingly. Movies, concerts, plays and whatever else it is you’re out and about doing usually have non-negotiable starting times, and you trying to cram a normally hour-and-a-half dining experience into 30 minutes because you chose to be fashionably late is as reasonable as expecting Ticketmaster to magically stop gouging you with mysterious service fees.

Threaten To Call Corporate. Threatening to call the corporate office to get what you otherwise aren’t is the desperate equivalent of heaving a Hail Mary pass with no time left on the clock. If bullying a restaurant manager with flying your threats of I’m going to get what I want no matter what up the hubris flagpole because you didn’t get the comp or gift card you feel your ground floor complaining deserves, then you’re probably the guy that got beat up in high school and someone has to pay, dammit.

Someone has to pay.