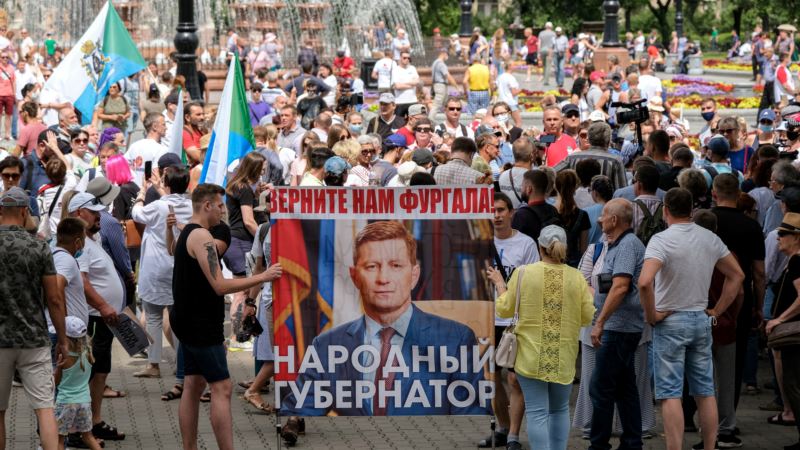 KHABAROVSK, Russia — A demonstration against the way Russian President Vladimir Putin has handled a regional political crisis is reportedly the largest seen in the Far Eastern city of Khabarovsk since protests began there more than two weeks ago.

Tens of thousands of demonstrators gathered in the streets of the Khabarovsk region’s capital for a third weekend on July 25 to show their frustration and anger over the situation.

Many called for Putin’s resignation. Others chanted “Disgrace” and denounced the acting governor that Putin appointed in Khabarovsk after he fired the popular former governor, Sergei Furgal.

Municipal authorities in Khabarovsk estimated about 6,500 demonstrators took part in the July 25 protest. Local media put the number at up to 20,000 people.

Protesters march in Khabarovsk on July 25.

But protest leaders and independent journalists said there were more than 50,000 people demonstrating on the streets of Khabarovsk, making it the largest anti-government protest there since the collapse of the Soviet Union in 1991.

The protests in Khabarovsk, about 6,100 kilometers and seven time zones east of Moscow, have created headaches for the Kremlin as it tries to prevent unrest over the economic impact of coronavirus restrictions.

Furgal was arrested in Khabarovsk on July 9 and transferred to Moscow. He is charged with attempted murder as well as ordering two murders in 2004-05. He denies the charges, saying they are politically motivated.

Furgal, a member of Vladimir Zhirinovsky’s nationalist Liberal Democratic Party of Russia (LDPR), was elected as the region’s governor nearly two years ago in an upset victory against the longtime incumbent from Putin’s ruling United Russia party.

He was officially dismissed by Putin on July 20 and replaced the same day when Putin appointed LDPR member Mikhail Degtyaryov as acting governor.

Degtyaryov has said on Instagram that he is following the protests via surveillance cameras.

He also has used his Instagram account to call on Khabarovsk’s residents to maintain social-distancing practices during the rallies and has warned that the authorities could tighten coronavirus restrictions there.

He has said protesters should spend time “properly” with their relatives at their summer houses on the weekend instead of taking to the streets.

He has also charged, without providing evidence, that the ongoing rallies are being organized by unspecified “foreigners,” adding that he will not meet with the demonstrators.

On July 21, two local lawmakers in Khabarovsk, Pyotr Yemelyanov and Aleksandr Kayan, quit the LDPR in protest against Furgal’s dismissal.

With reporting by Current Time and Reuters