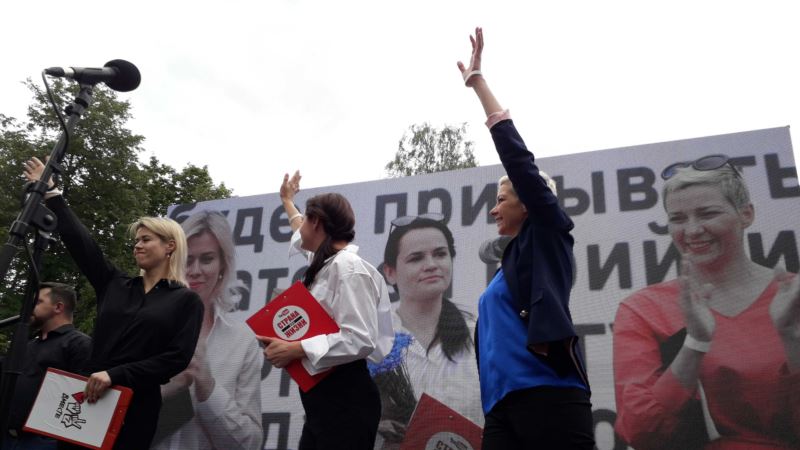 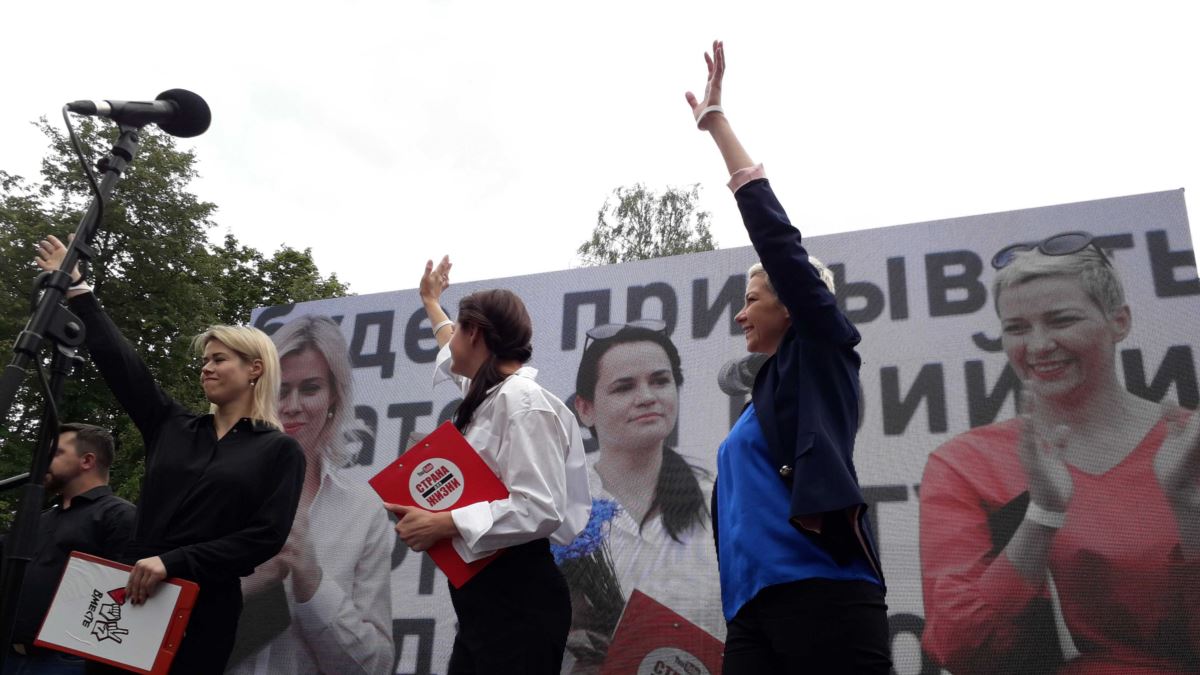 Belarusian Presidential candidate Svyatlana Tikhanovskaya addressed supporters for the first time at a campaign rally on July 25, speaking in Orsha, where she was joined by two other women representing imprisoned candidates.

Veranika Tsapkala, the wife of former presidential candidate Valery Tsapkala, and Maria Kolesnikova, and a representative of the staff of the imprisoned presidential nominee Viktar Babaryka, joined her on stage. The women referred to themselves as the “fighting girlfriends.”

“We all have a common goal – new fair elections,” Tikhanovskaya said, noting that she is not a politician and would like to return to her former ordinary and happy life.

Tikhanovskaya admitted she never thought she would run for office but said she had to do it for her husband, vlogger Syarhey Tsikhanouski, who was arrested after he expressed his intention to run for president.

She said her husband and the other candidates ended up in the pre-trial detention center only because they dared to tell people the truth and their opinion, which differs from the opinion of the authorities.

The authorities were afraid of their husbands, she asserted, and did not expect that their women would take their place.

“We women have to bear their burden,” Tikhanovskaya said, “We women need to lead Belarus into a bright, new, wonderful future. We are not afraid together, and together we will win. “

Analysts say the August 9 election poses the most serious challenge yet to incumbent Alyaksandr Lukashenka, who has been in office since 1994.

Kolesnikova said Babaryka, former Belgazprombank chief, is imprisoned on a fabricated charge, and the regime is cracking down on dissidents who are fighting for freedom. She called on officials not to be afraid of the authorities, but to “get close” to the people.

Veronica Tsapkala, whose husband is a prominent businessman, told the rally that the country has lost 750,000 citizens, who left in search of a better life, in the last decade and a half.

“I want my children and my family to live in this country,” she said. “We are Belarusians, and we want to raise our children in Belarus.”

Tikhanovskaya, who has been endorsed by Belarusian author and Nobel laureate Svetlana Alexievich, held a second rally on July 25 was in Bobruisk, and more events are scheduled to take place on July 26 in Zhlobin and Gomel.

“Lukashenka thought that he could deceive this silent society, that he could tell tales, scare them with fear. Nothing like that happened,” Alexievich said in an interview on July 22.

Another candidate, Andrei Dzmitryeu, held a campaign events in Zaslavl on and Baranavichy on July 25.

Two other candidates, Anna Konopatskaya and Siarhei Cherachan, have not announced any events in the near future.

Some of the people who attended the rally in Orsha said they will vote for Tikhanovskaya because they want more employment opportunities at home.

“Children do not see their parents because they are in other countries on wages,” a 31-year-old man told RFE/RL. “Whoever comes in place of the current president will be better off, because now we are rolling into the abyss.”

A 35-year-old man who came to the rally with his family said the government was good 26 years ago but no longer meets the requirements of the time because “the people have changed.”