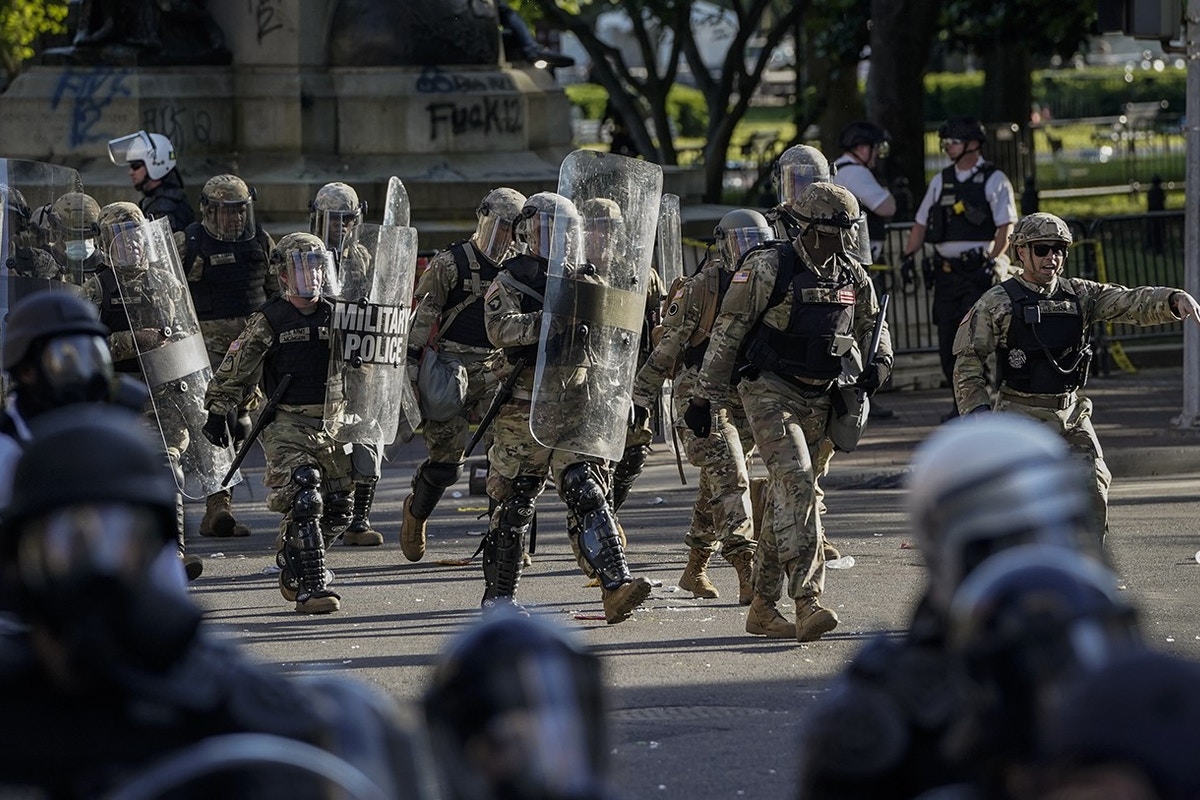 A National Guard whistleblower told Congress on Tuesday that peaceful protesters were subjected to an “unprovoked escalation and excessive use of force” in Lafayette Square in Washington, D.C., last month. On the evening of June 1, officers with the U.S. Park Police and Secret Service used tear gas, riot batons, and smoke devices to clear the square of protesters ahead of a staged photo where President Donald Trump posed in front of nearby St. John’s Church.

Maj. Adam DeMarco, appointed that evening to act as a liaison officer between the D.C. National Guard and the U.S. Park Police, testified before the House Natural Resources Committee that the events of June 1 were “deeply disturbing” to him, and that he observed the protesters acting peacefully.

“Having served in a combat zone, and understanding how to assess threat environments, at no time did I feel threatened by the protestors or assess them to be violent,” DeMarco said in his opening statement. “In addition, considering the principles of proportionality of force and the fundamental strategy of graduated responses specific to civil disturbance operations, it was my observation that the use of force against demonstrators in the clearing operation was an unnecessary escalation of the use of force.”

“Having served in a combat zone … at no time did I feel threatened by the protestors or assess them to be violent.”

Tuesday’s hearing also featured Acting Park Police Chief Gregory Monahan, who steadfastly insisted that the operation to clear the park was solely intended to put up a security fence around the square, and that it had nothing to do with Trump walking through and posing for a photo op with a Bible just minutes later. “Our focus that day was to install that fencing,” Monahan said. “There is 100 percent zero correlation to our operation and the president’s visit to the church.”

As the square was being cleared, Trump gave a brief speech in the Rose Garden, saying “As we speak, I am dispatching thousands and thousands of heavily armed soldiers, military personnel, and law enforcement officers to stop the rioting, looting, vandalism, assaults, and the wanton destruction of property.”

In his testimony, DeMarco said he did not know why the order was given the clear the square before the declared curfew. But his testimony adds to a growing chorus of voices criticizing the Trump administration for its crackdown on protests in D.C. The sudden escalation and violence against journalists, caught on video, immediately sparked widespread condemnation, including from foreign governments and Trump’s former defense secretary, Gen. James Mattis.

House Democrats have been probing the whether the violent clearing operation was ordered by senior officials in the Trump administration. Attorney General William Barr and Defense Secretary Mark Esper were both nearby, and both have denied giving an order to clear the scene. Barr also faced questioning Tuesday from the House Judiciary Committee about the deployment of federal officers to Portland, Oregon, where they have assaulted protesters and seized them off the street for questioning.

Monahan stuck to a narrow script, maintaining that there was no connection between Trump’s photo op and the operation, and that protesters had been violent.

Tuesday’s hearing was also Gregory Monahan’s first public appearance since June 1. He was scheduled to testify before the Committee on Natural Resources last month but canceled just days before, writing in a letter to the committee that he could not attend due to his attention to “ongoing protests and … violence and destruction of memorials and monuments.”

But the move was conveniently timed. Under the committee’s rules, the Democratic chair, Rep. Raúl Grijalva of Arizona, can issue a subpoena without a committee vote, but only if Republicans on the committee are given seven days notice. When Monahan canceled just before the hearing, the committee staff did not have enough time to organize a vote to subpoena Monahan. “Holding the vote isn’t always feasible on that short notice,” said Adam Sarvana, communications director for the committee’s Democratic staff, in an email.

During the hearing, Monahan stuck to a narrow script — maintaining that there was no connection between Trump’s photo op and the operation, and that protesters had been violent. He even brought a police helmet he said was dented by a brick thrown by a protester, but did not provide any details about the incident.

Monahan and other administration officials have repeatedly claimed that 50 officers were injured due to violence from protests, though no documentation has been provided. Under questioning during Tuesday’s hearing, Monahan testified that only one officer was injured on June 1, and the injury took place after police had moved to clear the square.

Monahan also answered questions about internal documentation of the evening’s events. The U.S. Park Police have come under fire for the fact that they did not record their radio transmissions during the operation, which is standard practice for the department. U.S. Park Police also do not wear body cameras, unlike many police departments around the country.

In response to a question, Monahan said he acknowledged body cameras’ “alignment with contemporary trends in law enforcement,” but said “at this time we are not in a position to successfully implement, manage, and sustain a body-worn camera program.”