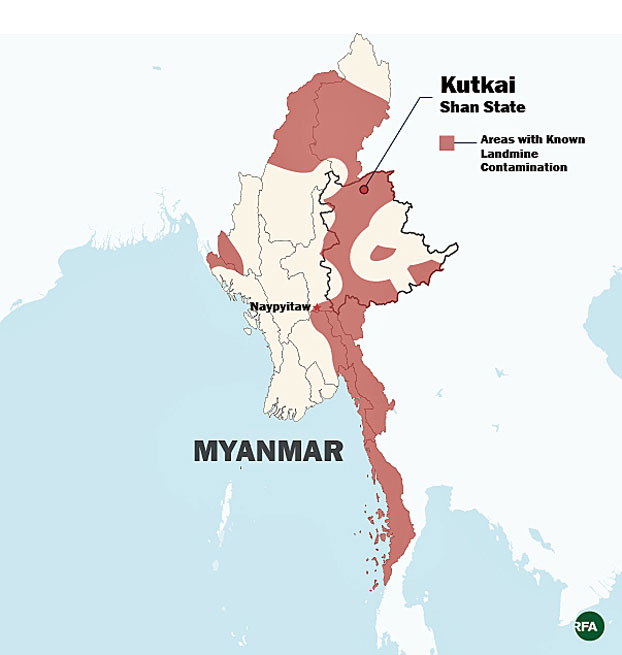 A five-year-old girl was killed and four other children were badly injured by a blast of unexploded ordnance in Myanmar’s northern Shan state as they played with an explosive device left from recent battles in a decades-old armed conflict in the region, family members said.

Lue Kein Kham and six of her young relatives, all ethnic Ta’ang (Palaung), were playing together Thursday evening at home in Kutkai township when the incident occurred, Ei Phoo, the children’s grandfather, told RFA on Friday.

“The children were playing, and I was trying to fertilize the plants,” he said. “I heard the explosion and ran to the children. I saw them lying on the ground. Four children were badly injured. They were sent to the hospital. One of them died. I am their grandfather. I don’t know whom to blame for this incident.”

Lue Kein Kham died from head injuries at Kutkai Hospital on Thursday, Ei Phoo said. One of the injured children was taken to Kutkai Hospital, while a girl and two boys were taken to Lashio Hospital.

The children live with their grandparents because their parents are working in Mongla, a Chinese border town some 400 miles southeast of Kutkai township.

“We are so old. We can no longer work,” said Aye Ei, the children’s grandmother.

“We let our children go away from home to make money,” she added. “We are left at home to take care of their kids. We feel devastated that this incident occurred.”

Humanitarian groups say that fear of mine-contaminated farmland is a key reason that rural working-age people leave Shan state to look for jobs in neighboring China and Thailand.

Scores of children are killed and maimed each year in Myanmar’s long-running ethnic wars.

At least four civilians were killed and 15 injured by landmines and unexploded ordnance in restive northern Shan state during the month of July alone, according to an RFA tally. The blasts occurred in areas where the military had recently engaged in fighting with ethnic armed groups.

The Mine Risks Working Group, which operates under the United Nations children’s agency UNICEF and the Myanmar government, said in a report in April 2019 that casualties countrywide from landmines and other explosives increased from 176 in 2017 to 276 in 2018 — including 56 children, 16 deaths and 40 injuries, with Kachin and Shan states hardest hit between 2015 and 2018.

The map shows areas in Myanmar with known contamination by landmines, unexploded ordnance, and other explosives. RFA graphic

Some villagers, who declined to be identified for safety reasons, said the government military’s Light Infantry Division No. 99 and soldiers from the rebel Ta’ang National Liberation Army (TNLA) had been recently fighting in the area where Thursday’s explosion occurred.

Around July 7, a Myanmar military regiment was stationed near the house where the blast occurred, and there was shooting, one resident said.

“The soldiers from the military then said they were responding to shooting from the enemy, but most of the villagers only heard gunfire from one side, so it might not have been a battle,” he said.

Villagers believe the soldiers left behind the ordnance that the children found when they cleared out of the area, he added.

RFA was unable to reach the Myanmar military or the TNLA for comment.

A TNLA spokesman said last year that the rebel army did not use landmines in the conflict.

Shan state, Myanmar’s largest state and home to the country’s second-largest ethnic group, has been under armed conflict between government forces and numerous ethnic-based armies fighting for autonomy since 1958, 10 years after  the former Burma gained independence from Britain in 1948.