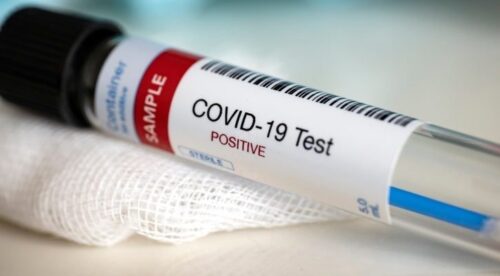 The US is at a moment of truth. This week, Congress has to face up to a pandemic that is out of control and an economy that is collapsing. The Republican’s and Democrat’s proposals show they will fail this test. The people will need to protect themselves and lead from below.

The pandemic is worsening with more than 60,000 new cases and approximately 1,000 new deaths daily. Deaths, now over 158,000, are spiking across the sunbelt and increasing across the Midwest. By Election Day, the US could have 250,000 deaths making COVID-19 the third largest killer after cancer and heart disease.

The economy shrank at a record 32.9% annual pace in the second quarter, the largest since records were first kept in 1947. Jobless claims increased for the second week in a row with 1.4 million new people seeking unemployment benefits and continuing claims have risen to 17.06 million. More than 35 million people have lost their jobs since March.

In the face of these depression-era numbers, neither the Democrats nor Republicans are planning enough spending to rebuild the economy. President Trump, who has botched the response to the pandemic, is unable to lead but seems willing to sign anything that passes Congress. 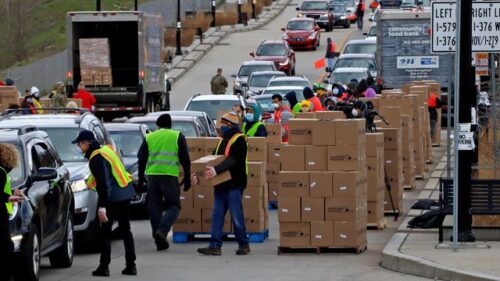 Boxes of food are distributed by the Greater Pittsburgh Community Food Bank, at a drive thru distribution in downtown Pittsburgh, 10 April, 2020 (AP Photo/Gene J. Puskar.)

The Republican Health, Economic Assistance, Liability Protection, and Schools (HEALS) Act seeks to push people back to work and reopen schools even if it is not safe to do so. Their proposals to cut unemployment benefits are designed to make workers desperate so they will work in conditions that put their health at risk. A large portion of school funding is restricted to schools that physically reopen forcing unsafe schools. Here are some of the details of the bill:

Health care: The inadequacy of for-profit healthcare has been magnified by the pandemic. The loss of jobs resulted in millions of people losing their health insurance on top of almost 30 million people who were already uninsured. Republicans do not include a funding increase for Medicaid, which 70 million people rely on. The National Governor’s Association reports states are experiencing budget shortfalls ranging between 5 and 20 percent. The Republicans do not provide any funding to state and local governments to make up for this loss of income. Without new funding, states will have to cut Medicaid eligibility, reduce benefits, or reduce payments to providers at a time when the economy and virus mean more people need it.

Food: The Census reports 26 million people do not have adequate food. Food banks are reporting shortages and 14 million children are going hungry but the Republicans did not extend funding for food assistance programs. The Republicans did not extend either the Supplemental Nutrition Assistance Program (SNAP), known as food stamps, or the Pandemic EBT program, a benefit for households with children who have temporarily lost access to free or reduced-price school meals, which ended in June. In contrast, they did propose a 100 percent deduction on business meals through the end of 2020.

Housing: The eviction moratorium expired last week. It protected an estimated 12 million renters in federally-backed properties. The HEALS Act does nothing to prevent evictions from restarting. There are 110 million Americans who live in rental households. Twenty percent of them, 23 million people, are at risk of eviction by September 30 according to the COVID-19 Eviction Defense Project. With the cut in unemployment benefits, the Census Bureau estimates 24 million people will be unable to pay next month’s rent, including 45 percent of Black and Latinx households.

Worker safety: As workers are being forced back to work, the HEALS Act cuts their ability to sue at a time when worker-safety is at its greatest risk in a century.  Senator McConnell calls this a “red line” that must be in the final bill. His proposal would preempt the few state workplace safety laws that exist and supersede such federal worker safeguards as the Occupational Safety and Health Act of 1970, the Fair Labor Standards Act of 1938, and the Americans with Disabilities Act of 1990, among others. The Republican proposal would erect almost insurmountable obstacles to lawsuits by workers who become infected at their workplaces and limit damages. To be immune, employers would merely have to show they were  “exploring options” to comply with federal law, or they found the risk of harm to health could not be “reduced or eliminated by reasonably modifying policies, practices, or procedures.” A worker whose lawyer issues a demand letter and settlement offer would find themselves potentially facing litigation by the employer against them. If employers sue workers, there is no limit to punitive damages. These provisions would be retroactive to December 1, 2019, and remain in effect at least until October 1, 2024.

Student debt: The HEALS Act doesn’t extend the interest-free payment pause on federal student loans or halt debt collection on government-held student debt, two forms of relief in the original CARES ACT. Without extending the relief Congress first granted to student loan borrowers through the CARES Act, 40 million people are likely to have to resume payments on September 30, 2020 at a time when there are Depression-like levels of unemployment.

Business support: The Act provides $100 billion more for the problematic Paycheck Protection Program, which has been rife with corruption as members of Congress and the administration as well as their friends, families, and donors got payouts. Big businesses got loans even though the program was intended for small businesses, making small business owners furious. Black and minority businesses were denied loans. Money is needed for main street businesses but PPP needs major changes rather than just pouring more money into the failed program.

The bill also includes $1.75 billion for the FBI building. This was added at the insistence of the Trump administration because the president’s hotel is across the street from the FBI. Without funding to refurbish the building, the FBI could move to Virginia or Maryland, leaving the current building to be torn down and likely replaced with a hotel that would compete with Trump’s hotel.

Military spending: Nearly $30 billion in the HEALS Act would be allocated in a brazen giveaway to the military. The bill includes billions for the Pentagon including $686 million for F-35 stealth fighters, $650 million for A-10 ground attack airplane wing replacements, $1.4 billion for four expeditionary medical ships, and $720 million for C-130J transport aircraft, $375 million for armored vehicles, $360 million for missile defense, and $283 million for Apache helicopters. This is reportedly being added to make up for money taken from the Pentagon for the border wall and comes after Congress recently passed a record military spending bill. 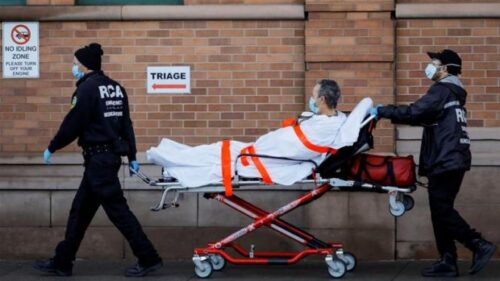 The Democrats Fail To Use Their Power

The Democrats passed the HEROES (Health and Economic Recovery Omnibus Emergency Solutions) Act in May, a $3 trillion proposal compared to the $1 trillion HEALS Act. Two months ago this may have been adequate but now that figure needs to be increased as more jobs have been lost, state and city governments have lost income, and the cost of treating the virus has increased with more cases.

A “red line” for the Democrats should be funding state and local government with at least $1 trillion to continue basic services. More than 20 million people work for state and local governments such as firefighters, teachers, police, sanitation workers, and transportation workers. The Economic Policy Institute estimates 5.3 million jobs will be lost without state and local funding. President Trump and the Republicans do not want another massive increase in job loss, so the Democrats are in a strong position to make this demand.

One area where the Democrats can build on some agreement is the $1,200 COVID-19 relief payment to individuals. These payments are too small. A good COVID-19 relief package would increase payments to $2,000 per person monthly for the duration of the pandemic and recession for households earning under $150,000 as suggested by Sen. Bernie Sanders. This would slow the economic collapse and ease suffering.

It is essential to extend the moratorium on evictions not just for federally-subsidized housing, but the federal government should also cover rent and mortgage payments for the duration of the crises. Otherwise, millions of families will lose their homes in an election year, which should be politically unpalatable for both parties. 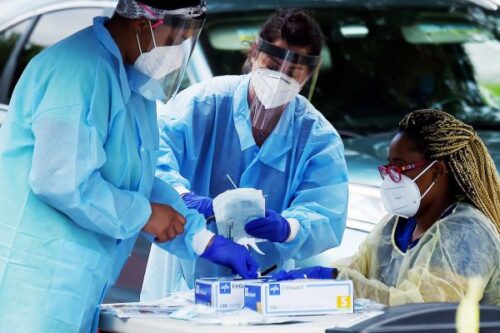 We Need a Plan

What is missing from both the Republican and Democratic bills is a strategy to control and stop the pandemic. The virus is 7 months old and still spreading rapidly. President Trump has failed to lead so Congress must do so. The bill should include a massive investment in making rapid testing available across the country. Every business and school should have rapid testing capability before they reopen. This should be combined with hiring 500,000 public health tracers so those who have been exposed to COVID-19 can be tracked to prevent further spread of the virus.

Everyone wants to restart the economy but this must be done safely. In addition to testing and tracing, workplaces and schools must be safe. School districts should decide whether to restart or continue web-based learning and should be supported by the federal government whatever they choose. Hundreds of thousands of tutors who can do one-on-one teaching to support web-based learning are needed. With high unemployment, especially among recent graduates and college students, there are people available to take on this task.

Congress should authorize OSHA to rapidly enact stringent standards for workplaces to reopen, along with funding for necessary safeguards. There should be increased funding for OSHA workplace inspections and investigations of inadequate safety. Employers who meet the standards for a safe workplace should have legal protection from frivolous lawsuits but employees should also have the right to sue if workplaces do not meet safety standards. This approach protects both workers and employers and will reduce the spread of the virus.

Neither party handled healthcare well even before the pandemic. COVID-19 has magnified the failure of for-profit healthcare. To stop the spread of the virus, Congress needs to break away from its privatized approach to healthcare. With the widespread job loss, 5.4 million workers lost their health insurance as did millions more family members. This is the largest decline in health insurance coverage in US history. The rapid response to this healthcare crisis should be the expansion of Medicare to everyone in the United States. Ideological opposition to publicly funded healthcare should not block this essential step. The long term failure of our healthcare system and widening health disparities demonstrate why we need a community-controlled, public, universal healthcare system. 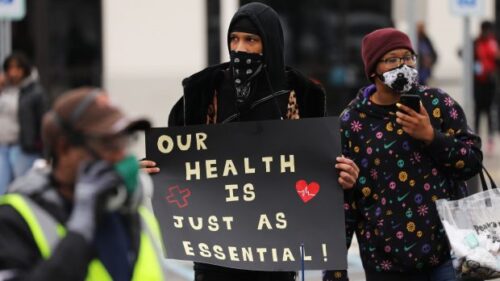 he People Must Rule, and Protect Ourselves

Congress and the President are unlikely to enact the laws needed to confront the pandemic and economic collapse. As a result, both will worsen. We will have to take action to protect ourselves and build popular power to win our demands.

We need to organize mutual aid to people meet people’s basic needs, such as for food and housing. Many cities have vacant buildings owned by the local and federal governments. As homelessness rises, these should be taken over to house people. We discuss the practical steps for taking over homes with Cheri Honkala this week on Clearing The FOG, (available as a podcast on Monday).

We build popular power by taking the streets as people have been doing for over two months now across the country, only buying essentials, refusing to pay rent or debt payments, blocking evictions and by building in our workplaces for a general strike.

Our actions must not be about which presidential candidate from the two parties of the millionaires to elect. Only one serious presidential campaign is right on COVID-19 and the economy, the Green candidates Howie Hawkins and Angela Walker. Our actions need to be about building a people’s movement that grows in power before and after the November elections. No matter who is elected, the people will need to resist, create new systems and rule from below.