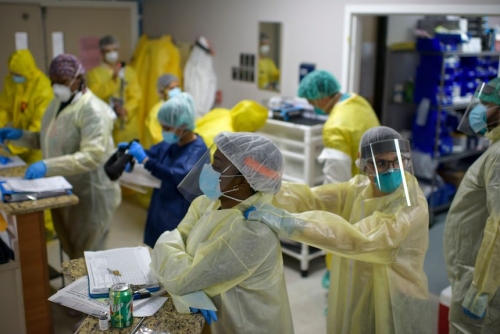 Private equity firms have imposed austerity measures on the hospitals they acquire. In a pandemic, that’s meant countless preventable deaths.

Private equity firms are often able to finance takeovers by using the very companies they’re buying as collateral for the loans to buy them—loans the newly purchased companies are on the hook to pay back.

It might even sound like no one with any power in American healthcare has learned much since March, but that’s not true, according to Saum Sutaria, chief operating officer of Tenet Healthcare, a massive, for-profit hospital chain. “We’ve learned a tremendous amount,” Sutaria boasted to Wall Street analysts during a conference call in mid-June. The McKinsey alum and featured Aspen Ideas Festival speaker was talking about how to limit Covid-19 “costs on a unit basis of managing.”

Of course, hospitals can lower their costs in a lot of ways that make patient care worse. Tenet, for example, furloughed an astonishing 10% of its staff in March and April. It also stopped contributing to 401(k) retirement accounts, rationed PPE (and threatened to fire employees who brought their own), and slashed hours for its nurses. Some nurses were sent home mid-shift, leaving others to watch sections as big as 20 patients. At a Tenet hospital in Massachusetts, nurses filed more than 50 reports over two weeks in April, documenting specific instances of how the downsizing jeopardized patients. One declared she had “[never] been more ashamed to work” somewhere.

Tenet’s pandemic management style has been especially harrowing at Detroit Medical Center (DMC), Detroit’s major hospital group (with 2,000 beds) and the city’s biggest employer. Nearly 3,000 people have died from Covid-19 in Wayne County, where Detroit is. Meanwhile, a lawsuit filed by four former DMC nurses claims that, at one point, DMC was so short-staffed that a staggering number of the deceased were in rigor mortis before anyone noticed they weren’t breathing. The staffers allege hospital administrators actively increased the death toll by instructing nurses not to revive patients suspected of having Covid-19.

As bodies piled up, DMC ran out of space for body bags, then ran out of body bags. When a group of overnight nurses showed up early for their shift to plead with their bosses for reinforcements—either from outside the hospital or among the 1,500 staffers the system had laid off over the past few years—Tenet officials instead sent them home. The day staff, then, worked a 25-hour shift.

The lawsuit also claims the emergency room’s lack of PPE led to numerous unnecessary deaths, as nurses and others became infected after sharing hospital gowns and masks.

This radical austerity is not completely new at DMC, though the pandemic showcases its pitfalls. In 2011, DMC was purchased by Vanguard Health Systems, which was itself controlled by The Blackstone Group, a private equity firm. The deal was hyped with so much promise for the hospital that Mike Duggan, the former DMC chief executive who helped broker the deal, used the story to get himself elected mayor. Of course, like many private equity deals, the goal was never the long-term health of the company (or the patients) but to make money (fast) by cutting costs, extracting cash and flipping it to another buyer.

Taking over a giant company generally requires a giant pile of cash. Private equity firms are often able to finance those takeovers by using the very companies they’re buying as collateral for the loans to buy them—loans the newly purchased companies are on the hook to pay back. Rubbing salt in the wound, private equity firms often use some of that new cash to pay themselves a dividend, even when the company they bought isn’t making money.

By 2013, the hospital chain was spending about $200 million a year on its loan payments. Meanwhile, Vanguard Health’s profits for the previous five years combined totaled just over $80 million. That’s when Tenet Healthcare stepped in, paying $1.8 billion to buy DMC in 2013, including $2.5 billion in high-interest debt.

By 2014, Tenet’s interest payments had ballooned to $754 million a year—88% of its cash flow. DMC then slashed spending, axing its highly regarded pediatric allergy and asthma care program and downsizing its residency program in 2019. It also cut a quarter of its sterile technician staffers between 2006 and 2016, to the point that DMC surgeons complained of blood and tissue left inside supposedly clean surgical instruments. Some surgical procedures were actually halted partway through for lack of clean instruments; the cardiologists who exposed the scandal were then barred from leadership roles and had their email credentials revoked. Meanwhile, DMC slashed its budget for administering care to poor, uninsured patients from $22.9 million in 2013 to $470,000 in 2016.

Corner-cutting in the U.S. healthcare system has affected even relatively upper-class institutions. A doctor with the largest private equity-backed dermatology chain, for example, told Bloomberg earlier this year that he started keeping toilet paper in his car (even before the pandemic) because “waiting for corporate approvals” left his office without essentials too many times. A doctor in middle-class Oxford, Miss., was fired after she started a Facebook fundraiser to buy masks for nurses because the private equity-owned staffing firm did not provide them. An emergency room doctor with Blackstone’s TeamHealth was fired after writing a Facebook post wondering why the Indian reservation hospital (where he volunteered) had a better equipped Covid-19 triage system than his hospital in the wealthier city of Bellingham, Wash., (at the time, a Covid-19 hotspot), where staffers were prohibited from purchasing anything without approval from a hard-to-reach corporate “expert doc.”

Meanwhile, poor people are increasingly likely to find themselves abandoned altogether, as doctors and nurses in Philadelphia and Chicago learned after Tenet sold off area safety net hospitals in 2017 and 2019 to a shadowy Southern California-based group of small-time investors (the hospitals were shut down under mysterious financial circumstances). Tenet is also planning to sell its Memphis hospitals to a chain notorious for suing destitute patients over medical debt. Leonard Green & Partners, the same Los Angeles-based private equity firm that sucked hundreds of millions of dollars out of the now bankrupt retailer J. Crew, shut down a safety net hospital system in San Antonio and sold its buildings to a hotel developer, extracting $658 million for itself in dividends and fees.

But as Tenet’s Saum Sutaria explained on his conference call, the pandemic is an exciting time to profit off the poor. Across the country, Tenet and other hospital chains have created a process called “cohorting,” setting up DIY Covid-19 wards in rec centers, basements, old hospice facilities and similar spaces. In concert with the billions of dollars Tenet received from CARES Act bailouts (not just the forgivable loans), this makeshift pandemic care has cleared hospital space for lucrative elective surgeries to continue, right on alongside the pandemic bloodbath.

The harrowing conditions inside one such makeshift Covid-19 unit—adjacent a relatively empty hospital in Edinburg, Texas, operated by the for-profit group Doctors Hospital at Renaissance—is the subject of a stomach-churning viral Twitter thread featuring claims of patients covered with ants, stories of dirty equipment and absentee doctors, and unnecessary deaths caused by a preposterous network of low-capacity oxygen tanks. The related Twitter stories were collected by a Florida nurse to whom a roughly half-dozen shell-shocked travel nurses turned—after their staffing agency threatened them with “demobilization” should they speak out. Observers quickly characterized the setup as a genocide. For Tenet and an executive team long beset by poor earnings numbers and ever rising litigation costs, however, this “innovation” in patient “consolidation” is a point of pride.

“We have simply learned how to care for these patients in a more consolidated manner,” Sutaria boasted.

The heady mix of CARES Act cash, austerity measures and public acceptance of mass death has enabled the pandemic to breathe temporary new life into the financial prospects of the so-called healthcare industry—ironic, given at least one company’s prohibition on reviving Covid-19 patients.

Moe Tkacik is a fellow at the American Economic Liberties Project and, until recently, a waitress.