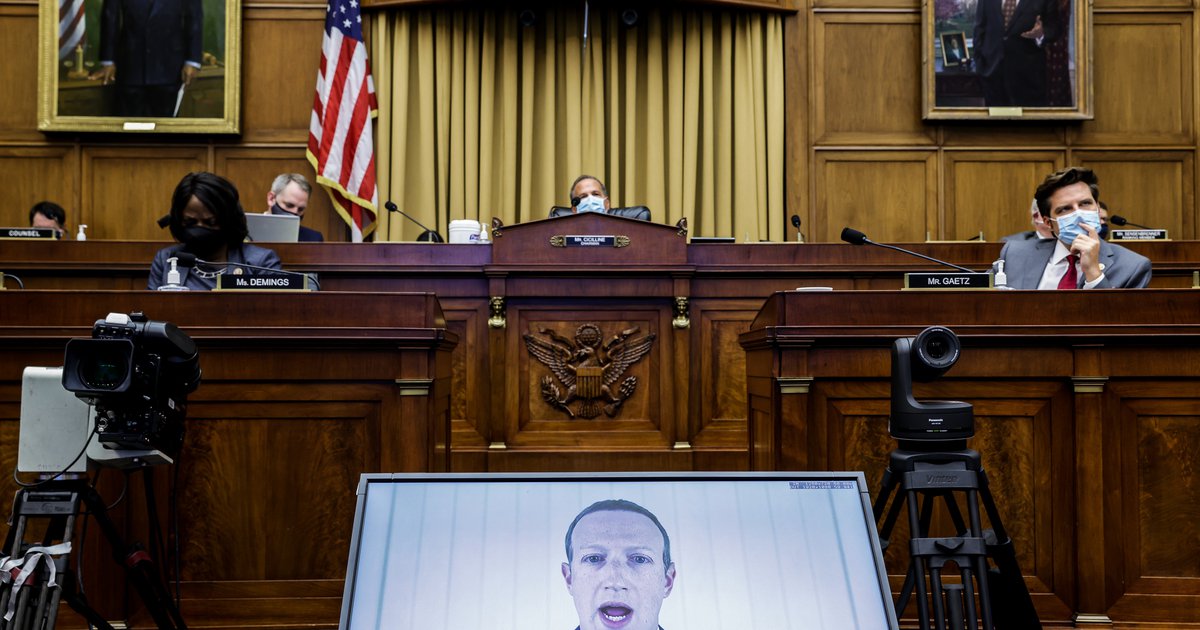 Last week I like many others watched the leaders of large US tech firms get grilled by the US House Judiciary Subcommittee on Antitrust Law. The CEOs of Amazon, Apple, Facebook and Google struggled to answer Congressional representatives’ questions about their abuse of dominance in various markets, from advertising to online shopping and apps. Many felt real catharsis in watching these powerful men squirm from their corporate offices via video link.

However, as an activist for better, longer-lasting electronics, I felt the Subcommittee missed a great opportunity to put Amazon, Apple and Google on the spot about how they use their dominant position to shorten the lives of consumer electronics.

This impacts everybody directly, in terms of the cost of buying and using devices. But it also has a profound material and climate impact on the planet.

What Congressional representatives should have asked

Who can’t relate to being told that repairing a mobile phone is “too expensive”? This is no mere coincidence – it is often by design.

Apple has been the most visible at trying to undermine third party repairs of its devices. The company has started using sophisticated software locks on parts to undermine small, independent repair businesses. The locks make replacing certain parts with genuine, reused Apple parts very difficult, intimidating owners with alarming notifications which cannot be removed.

Behind the scenes, Apple has been actively campaigning against Right to Repair legislation in over 20 US states. The company recently sued a one-man repair shop in Norway for importing screens refurbished in China, taking the case all the way to the Supreme Court. They won. The shop owner says Apple is “weaponising” trademark law and using its one trillion-dollar war chest against businesses like his.

This type of behaviour is profoundly anti-competitive and has major impacts on our wallets and the planet. In an attempt to head-off criticism and regulation, Apple recently rolled out a very restrictive program in the US and now Europe to sell screens and batteries at uncompetitive prices to independent repair shops. Predictably, the up-take has been poor.

Last year Amazon worked with Apple to remove small, independent refurbishers and resellers of Apple products from its marketplace. What did Amazon get out of it? Apple began selling its new products through Amazon. This has limited consumer choice and has an immediate impact on the planet.

Google uses its platform power in online advertising to ban all third-party repair businesses from advertising. Small businesses report they’ve been hit very hard by this. But Google’s ban also makes it much harder for the average person searching for a local repair business online, making it much more likely for people to simply bin an electronic device and buy a new one.

Google claims it is preventing fraud, but provides no evidence that fraud is more prevalent in third party repairs. And ultimately the company is accountable to nobody – it sets the rules.

While not mentioned in last week’s hearing, many of these issues did arise in the Subcommittee’s far-reaching investigation. The Subcommittee investigation has collected enough documentary evidence — 1.4m pages — to diagnose a wide range of anti-competitive practices.

And the day after the Congressional spectacle, the Subcommittee published some of what it gathered via subpoena: internal emails from Apple executives that shed light on some of the practices detailed above.

The emails reveal that Apple’s seemingly united public position on repair was in fact subject to considerable internal debate and uncertainty. In one memo from March 2019, Apple’s Director of Corporate Communications asks: “What’s our repair strategy? Do we believe it’s important to get ahead of any additional regulations about repair options in Europe…?” Those involved in this correspondence no longer work for Apple.

These email exchanges also give us insight into the quid-pro-quo between Apple and Amazon, which led to the removal of small, independent resellers of secondhand Apple equipment. In one email, Apple alleges all of the goods from these small sellers were counterfeit, and Amazon is thrilled to simply take their word.

When it comes to search engines, app stores and online shopping, lawmakers face real obstacles in challenging the entrenched power of these trillion-dollar companies. Even regulator-imposed fines in the billions of dollars are simply too small to really hold these giants to account.

But the independent repair and reuse sector is surviving against all the odds, and we have yet to witness a total monopoly over repairs.

However, if Apple is allowed to continue to expand its dominant position to prevent businesses from accessing and replacing spare parts using software locks, there is a real danger they and others can achieve effective monopolies on repairs.

Regulators and lawmakers need to move fast to prevent this from happening. The good news is that no matter what happens in the US, Apple and others can expect to face regulation soon in Europe. As Ernestas Oldyrevas of the European Right to Repair campaign reminds us:

“After hesitation, the European Commission is taking steps to make our smartphones last longer and be easier to repair. An exploratory study underway this year will pave the way for a whole set of ambitious new requirements on more environmentally-friendly design of smartphones. Meanwhile, rules on battery replaceability – not only of smartphones but also other electronic devices – are expected in October.”

The question is whether this regulation will go far enough, especially in what relates to the fast-changing situation of software locks and in relation to the availability and cost of spare parts.

European competition authorities must also turn their attention to Apple’s “weaponisation” of trademark law and Google’s abuse of its advertising platform against third party repairs – issues that to date have received scant attention.