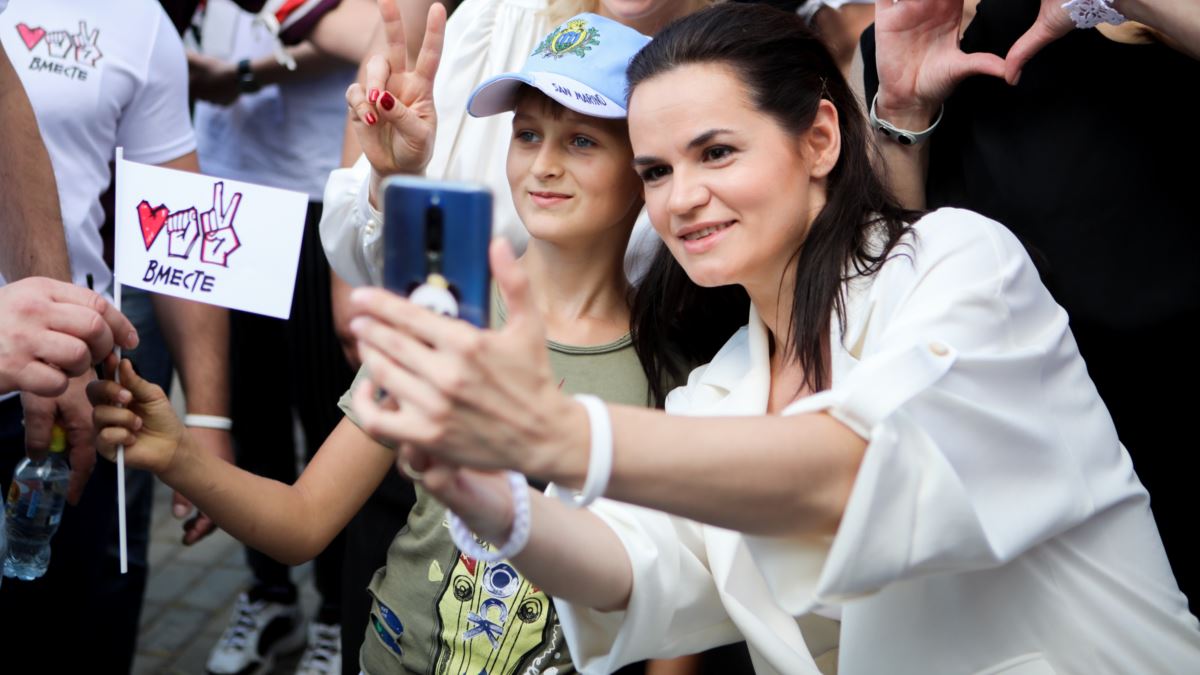 Svyatlana Tsikhanouskaya, who is hoping to unseat Belarusian President Alyaksandr Lukashenka, Europe’s longest-serving leader who has been called the continent’s last dictator, stepped up to the microphone, gazed out at the crowd, and apologized.

“Sorry…. I’m kind of nervous. There are so many people here,” the 37-year-old said as she began her address on July 24 in Navapolatsk, a city of some 100,000 in the north of the Eastern European country of some 9.5 million.

Tsikhanouskaya is running in the August 9 Belarusian presidential election, despite saying she does not really want the job and vowing to relinquish it quickly if she somehow wins.

She entered the race after her husband, Syarhey Tsikhanouski, a firebrand vlogger, was arrested and then barred from collecting signatures to get on the ballot.

He was one of many candidates — three deemed serious challengers to Lukashenka — barred from running by the Central Election Commission (CEC).

The 65-year-old Lukashenka, in power since 1994, is facing what many experts are calling his most serious challenge ever as he seeks a sixth term.

Belarus has been hit hard by the coronavirus pandemic, and many blame Lukashenka, who refused to institute any lockdown measures, dismissing the virus as nothing more than “mass psychosis.” The World Bank is predicting the economy will contract 4 percent this year, the biggest drop in 25 years.

With Lukashenka’s popularity apparently waning, challengers stepped forward, drawing large crowds in Belarus, where unsanctioned rallies are usually dispersed by police. Since May, more than 1,100 people have been detained as Lukashenka vowed there would be no “Maidan,” a reference to the 2014 protests in Ukraine that led to the ouster of a Moscow-friendly president.

Lukashenka has lashed out at the West, Poland, even longtime ally Russia, accusing them of fomenting unrest. Thirty-three Russian mercenaries were rounded up in what Lukashenka claimed was a plot to sow “instability” ahead of the vote, charges the Kremlin denied.

Despite her early doubts and nervous moments, the almost accidental candidate Tsikhanouskaya has managed to wow crowds across Belarus, seeming to tap into pent-up frustration with Lukashenka’s handling of the coronavirus pandemic and the stagnant economy, which is still largely reliant on inefficient state-run firms.

Tsikhanouskaya’s campaign has taken off, aided by two other high-profile women, in what has been hailed as a new wave of female political activism in conservative Belarus.

Veranika Tsapkala headed the campaign of husband, Valer, a former ambassador to Washington and the founder of Minsk’s High Tech Park, who fled amid threats first to Moscow and then to Kyiv. The other woman to join Tsikhanouskaya’s team was Maryya Kalesnikava, who led the stymied campaign of Viktar Babaryka, former board chairman at Russian-owned Belgazprombank.

Lukashenka has dismissed the three as “poor things” and contended Belarus was not ready for a woman as president. He’s even suggested the constitution be changed to allow only those who served in the military — virtually an all-boys club in Belarus — be allowed to run for president.

Valer Karbalevich, a Belarusian political analyst based in Minsk, said Lukashenka let Tsikhanouskaya into the race, figuring she was no rival.

“He thinks that if Belarusians are forced to choose between voting for a housewife or voting for a wiser, more experienced politician, then even those who are skeptical of him, will, facing this choice, vote for him. That’s his logic, his thinking,” Kabalevich explained in July to Current Time, the Russian network led by RFE/RL in cooperation with VOA.

However, the throngs at her rallies across Belarus suggest Tsikhanouskaya will be no pushover in the election, especially if it is free and fair, something no ballot under Lukashenka has ever been deemed by the West.

On July 30, some 63,000 people, according to the Belarusian NGO Vyasna, (Spring), turned out for a Tsikhanouskaya rally in Minsk. It has been called the biggest opposition gathering in the capital in decades.

It came hours after Tsikhanouskaya and other candidates were called in for a meeting with Belarusian security officials who warned them of “possible provocations” during the rest of the campaign, while announcing stepped-up security measures.

A day earlier on July 29, Belarusian officials announced 33 individuals from a Kremlin-linked private military company, Vagner, had been detained outside Minsk. Lukashenka claimed they had come to sow “instability” ahead of the vote, charges the Kremlin denied as absurd.

At the Minsk rally with her campaign’s symbol of a heart, a clenched fist, and a victory sign in the background, Tsikhanouskaya said: “My husband, Syahey Tsikhanouski, is not a criminal.”

“I entered politics not to seek power but to seek justice,” she added.

She said Lukashenka was trying to discredit the opposition and justify a further crackdown by contending they were in cahoots with the mercenaries, adding Belarusians wouldn’t buy Lukashenka’s story.

“No one will believe that these hitmen have been dispatched here specifically for the election,” Tsikhanouskaya told the crowd.

Tsikhanouskaya and her family have faced threats. In July, she moved her two children out of Belarus to an undisclosed European Union country amid fears for their safety.

Tsikhanouskaya told Current Time that despite facing moments of doubt, she no longer regrets her decision to enter the presidential race, even despite the threats.

“I see how many people come to our rallies and how many have wanted to come but just couldn’t, or those who come whether I take part in it or not,” she said. “It’s a clear sign that people want change. People have woken up. They no longer want to live in fear and humiliation. They want to feel that they are citizens of their country. It’s inspiring. I realize there are people behind me, around me, and ahead of me.”

As his popularity wanes and the opposition rises, Lukashenka has sharpened his barbs.

In a speech to parliament on August 4, Lukashenka called his opponents well-paid “foreign agents” bent on returning Belarus to the “chaos” of the 1990s.

‘She Was A Good Girl’

Tsikhanouskaya was born Svyatlana Pilipchuk on September 11, 1982, in Mikashevichy, some 200 kilometers south of Minsk, in a typical Soviet-style five-floor apartment block where her parents still reside.

“They live here, I think, at this entrance,” one woman, who requested her name not be used, points to the grey, concrete brick building. “Yura and Valya Pilipchuk, a simple family. She is a cook and he is a driver. I still remember Svyata as a girl. What can I tell you? I will vote for peace,” she said, making clear she will vote for Tsikhanouskaya.

Eva Ivanauna, a retired schoolteacher, says “everyone here is for Svyatlana,” recounting how the would-be president was an exemplary person and student.

“I still remember her as a child. She was a good girl. There were never any problems with her. She didn’t drink or smoke. She had a good upbringing. Her parents were good, down-to-earth people,” Ivanauna said to RFE/RL’s Belarus Service.

After graduating from Mazyr State Pedagogical University, Tsikhanouskaya met her future husband, Syarhey. After marrying, they moved to Minsk where she raised the kids while Syarhey turned more and more to exposing corruption on his YouTube channel. A Country For Living has nearly 270,000 subscribers.

Before his detention, Tsikhanouski was attracting big crowds across Belarus, many brandishing bedtime slippers to squash the “cockroach” Lukashenka, the epithet Tsikhanouski tarred him with.

While Tsikhanouskaya’s candidacy may have been almost accidental, women were long overdue for a leading political role in Belarus, argued Ninina Stuzhynskaya, a Belarusian women’s rights activist.

“I think Belarusian society has long been ripe for a woman in a leadership role,” she told RFE/RL’s Belarus Service in July. “The appearance of these women in the public arena is a beautiful thing. It’s encouraging and optimistic.”

Belarusian author and Nobel laureate Svetlana Alexievich has given her backing to Tsikhanouskaya, saying women in Belarus have often answered history’s call, although they were later forgotten.

“When I wrote The Unwomanly Face Of War, about how millions of women fought in [World War II], I became convinced that women are at the forefront of their society,” Alexievich told RFE/RL’s Belarus Service. “They made sacrifices on the altar of victory, and after the war it was not appreciated and forgotten by the state and the people. I’d like that something like that doesn’t happen again.”

Tsikhanouskaya is not the only female candidate in the race. Hanna Kanapatskaya, who was an opposition member in parliament from 2016 to 2019, is also on the ballot. Despite her opposition bona fides, many analysts have dismissed her as a spoiler candidate.

Despite her early campaign jitters, Tsikhanouskaya has sharpened her political message.

In a speech on state-run television on July 28, Tsikhanouskaya blamed Lukashenka for poverty in the country, blaming it on his mismanagement of the economy. She vowed Belarus would no longer be poor and dependent.

“We say that we want a new president, and the government answers that there will be a ‘Maidan,’” Tsikhanouskaya said, referring to the protests in Ukraine in 2014 that led to the ouster of the pro-Moscow President Viktor Yanukovych. “We say that a majority of Belarusians want to live in a free, rich country, and the government threatens us with ‘Maidan.’”

She’s spoken little of foreign affairs. But Tsikhanouskaya has called for good ties with Russia while voicing opposition to any deeper integration.

“We want to be independent. We want to find friends and not enemies among other countries,” she recently told a Russian news site.

Tsikhanouskaya says that if elected she will call for the release of all political prisoners, a return to the 1994 constitution as it was before Lukashenka stripped it of checks and balances, and crucially, a rerun of the presidential election including the barred candidates.

“I am not a politician,” she has said. “I am going to perform my mission and quietly step aside, and Belarus will be ruled by a new, decent president.”

Many Belarusians may think they’ve already found one.