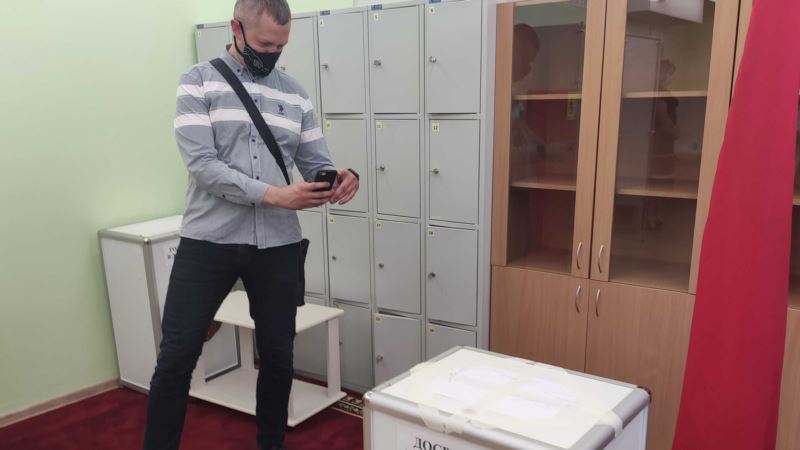 Belarusian authorities continue to ramp up pressure on independent election observers ahead of the August 9 presidential ballot amid concerns strongman Alyaksandr Lukashenka will use fraud and repression to extend his 26 years of rule against an energized opposition.

The Minsk-based Vyasna human rights center on August 8 reported dozens of cases of police harassment and intimidation at polling stations, as well as the detention of independent election observers during early voting.

Belarusian authorities have deported three correspondents from Current Time ahead of the election.

The three reporters from Current Time, a Russian-language TV network led by RFE/RL in cooperation with VOA, have also been banned from entering Belarus for 10 years.

Opposition politicians, rights activists, and critics of Lukashenka have called on citizens to refrain from early voting, which started on August 4, charging that it gives government loyalists more opportunities to rig the election results.

The Central Election Commission said on August 8 that turnout during the early voting period was 32.24 percent of the country’s 6.8 million eligible voters.

The united opposition — centered around presidential candidate Svyatlana Tsikhanouskaya — has urged voters to combat electoral fraud and set up multiple organizations to monitor the presidential poll.

Tens of thousands of opposition supporters have attended daily rallies in recent weeks in support of Tsikhanouskaya, a 37-year-old political novice backed by disqualified presidential candidates.

The lead-up to the vote has been marred by dubious disqualifications and an unprecedented scale of detentions and other persecution against a backdrop of a pandemic and pro-democracy protests.

One election-monitoring campaign said August 8 it had documented inconsistencies in the first three days of early voting at polling stations where observers of the initiative were present.

Read our coverage as voters in Belarus decide on August 9 whether President Alyaksandr Lukashenka will continue after 26 years in power.

According to the initiative, about 50 of its observers have been detained during the five days of early voting.

The Honest People campaign was initiated by jailed businessman Viktar Babaryka, whose presidential campaign and that of another disqualified presidential candidate has joined forces to elect Tsikhanouskaya.

Meanwhile, the Voice platform, which calls on voters to send photos of completed ballots for the presidential election, has counted over 1 million registered users who have promised to help keep track of the vote. The platform was launched by the Honest People initiative.

Ahead of the vote, the Prosecutor-General’s Office threatened to block the website of the Voice platform after Lukashenka on August 6 stated that it was necessary to assess the legitimacy of alternative vote-counting initiatives.