In 1968, a small group of elite academics, industrialists, and government officials gathered at a Roman villa to discuss “the predicament of mankind.” They called themselves the Club of Rome, and, in a largely impenetrable document filled with bizarre flow charts and words like “problematique,” they laid out a plan to analyze the major issues facing humanity with the new technology of computer modeling.

“We proceed from the belief that problems have ‘solutions,’” they wrote. Their goal was to find them.

The result, a 200-page book called The Limits to Growth published in 1972, forever changed the contours of the burgeoning environmental movement. The thesis was simple: The planet simply could not sustain current rates of economic and population growth. “The most probable result,” the group predicted, “will be a rather sudden and uncontrollable decline in both population and industrial capacity.” In other words, humanity would have to hit the brakes — or suffer the collapse of society as we know it.

The book was met with scorn and a pile-on in the mainstream media. Three economists writing in the New York Times called it “an empty and misleading work” that was “little more than polemical fiction.” Henry Wallich, an economist and columnist for Newsweek, wrote that it amounted to “a piece of irresponsible nonsense.”

Nevertheless, the ideas that sprang out of that meeting in Rome gained traction. A year later, a geologist testifying before Congress quipped, “Anyone who believes growth can go on forever is either a madman or an economist.” The environmental historian David Worster wrote in 2016 that The Limits to Growth was “the book that cried wolf. The wolf was the planet’s decline, and the wolf was real.”

Half a century after The Limits to Growth, the future of the planet certainly doesn’t look bright. Since the book was published, the concentration of carbon dioxide in the atmosphere has shot up, from around 327 parts per million in 1972 to 416 parts per million today. (Scientists had warned that passing 350 parts per million risked dangerous warming.) Global temperatures, meanwhile, have climbed almost 2 degrees Fahrenheit, or 1 degree Celsius, since pre-industrial times — fueling extreme weather events, catastrophic heat waves in the Arctic, and steadily rising sea levels. Last year, a United Nations report found that humans are altering the planet so thoroughly that up to 1 million species face extinction.

One of the Club’s chief concerns — that runaway population growth would torch the environment — has fallen out of favor in recent years. (After all, birth rates in developed countries, which use the most resources and have the largest environmental footprint, are on the decline.) But economic growth is another beast entirely. For decades, environmentalists have squabbled over whether the production of more and more stuff, year after year, is to blame for the mess the planet is in. The green movement has split into those who believe growth can continue under new, more sustainable conditions, and an increasingly vocal minority who believe that “green growth” is at best an oxymoron, at worst a distracting fantasy.

These two camps have remained in an uneasy alliance, working toward common goals of conservation and clean energy. Now as the COVID-19 pandemic cripples the world’s economy — which is expected to shrink by at least 6 percent this year — the debate over growth has been thrust into the spotlight. Fifty years after Limits to Growth, many economists and environmentalists are reconsidering its lessons, questioning whether economic growth is in fact compatible with a sustainable world — and if not, how else governments can measure the success (or failure) of modern societies.

There are whole industries built on the idea that the way to save the planet is to paint the economy green. Replace plastic plates with compostable ones. Trade in a gas-guzzling Jeep for a Toyota Prius. In other words, most economists believe that the world’s economies can continue to produce more, but in a “green” way: more housing, more electronics, more cars — but also more solar panels, more wind turbines, and more electric vehicles. “Greening growth is necessary, efficient, and affordable,” declared the World Bank in a 2012 report.

These “green-growthers” argue that new low-carbon technologies, combined with a steady shift toward producing more services (think day-care centers or community theater), can make continued growth sustainable. This kind of “have your cake and eat it too” mentality has become the dominant way of thinking about how to turn the giant, fossil-fuel spewing world economy around.

But others think economic growth, no matter how green, imperils the planet. They believe governments should either purposefully shrink their economies — an idea often known as “degrowth” — or, at the very least, not grow any further. “Material growth cannot continue indefinitely because planet Earth is physically limited,” wrote the ecological economist Tim Jackson in his 2009 book Prosperity with Growth. “Living well on a finite planet cannot simply be about consuming more and more stuff.” (The Club of Rome, for its part, suggested that civilizational collapse could be averted if society came to accept “self-imposed” limits.)

The degrowth camp has largely stayed on the fringes of environmental thought. In recent years, however, as the climate crisis has intensified, its critique has crept into the mainstream, with degrowth-focused books, journals, and conferences. The idea has also found a home in activist circles: It’s popular among members of the U.K.-based group Extinction Rebellion, who brought the city of London to a halt in October with protests against the government’s sluggish response to climate change. You can hear its influence in speeches by Greta Thunberg, the 16-year-old Swedish activist. “We are in the beginning of a mass extinction, and all you can talk about is money and fairy tales of eternal economic growth,” she said during a United Nations climate summit last year. “How dare you!” 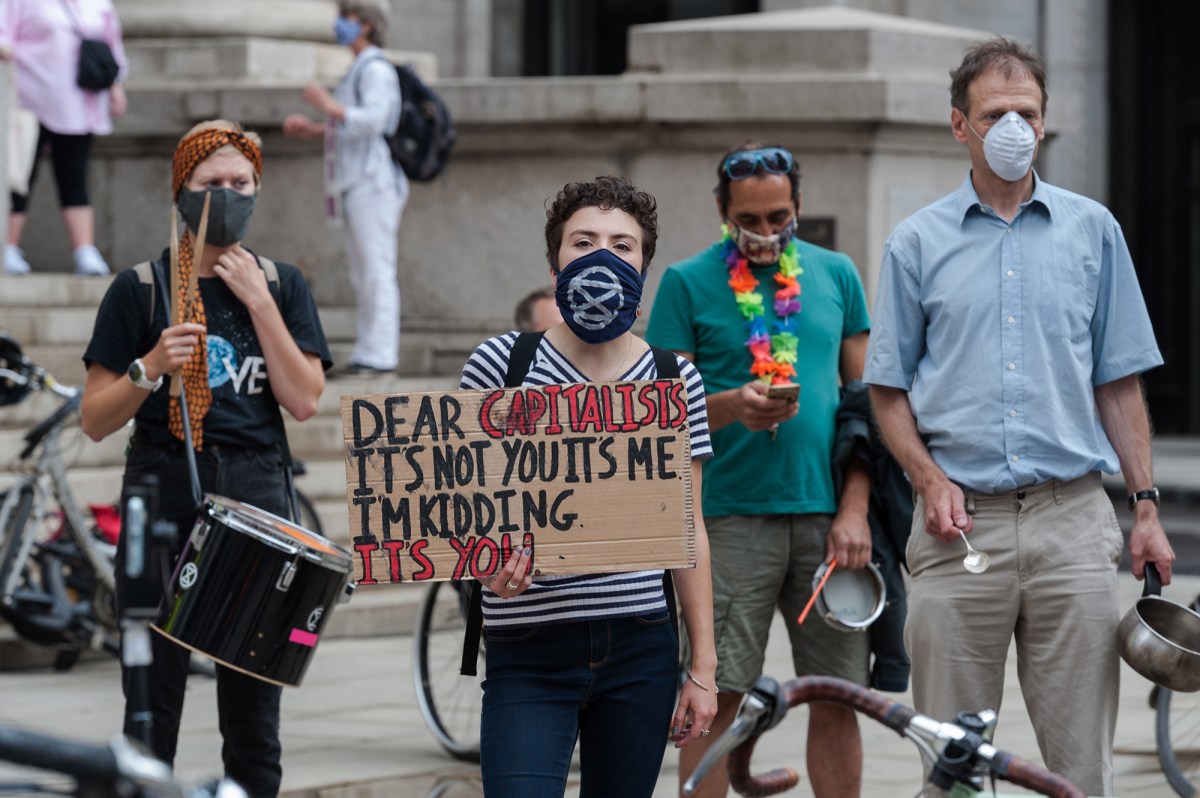 Extinction Rebellion environmental activists stage a loud demonstration in July outside the Bank of England to protest against the distribution of funds to carbon-intensive industries. Wiktor Szymanowicz / NurPhoto / Getty Images

The most radical members of this group think wealthy, developed countries should shrink their economies to fit within ecological limits — curbing consumption and energy use enough to save huge swaths of the planet from destruction and prevent runaway climate change. “Degrowth signifies a desired direction, one in which societies will use fewer natural resources and will organize and live differently than today,” writes Giorgos Kallis, an ecological economist at the Autonomous University of Barcelona, in Degrowth: A New Vocabulary.

How such a transition could be made politically palatable, or managed without impoverishing millions and setting off widespread unrest in the United States, Europe, and China, is largely left to the imagination.

Others within the movement take a moderate approach, calling for a re-balancing of priorities (health care and education instead of corporate profit) as opposed to throwing the economy into reverse. Tim Jackson, the author of Prosperity without Growth and a professor of sustainable development at the University of Surrey in England, considers himself a supporter of “post-growth,” which suggests turning away from growth, instead of actively trying to suppress it. “Would it not be better,” he writes, “to halt the relentless pursuit of growth in the advanced economies and concentrate instead on sharing out the available resources more equitably?”

At the heart of debates between green-growthers and degrowthers lies a simple question: Can the global economy — that giant engine which has spent centuries sucking down fossil fuels and spitting up material goods — be separated from environmental destruction?

Historically, big industries have relied on coal and oil — and so pollution, especially carbon emissions, has followed the economy’s lead. During downturns, like the Great Recession, emissions drop — sometimes precipitously, only to resurge when the economy turns around. Take the COVID-19 pandemic: As shutdowns put millions out of work in April, worldwide carbon emissions plunged by 17 percent. By mid-June, however, as cars returned to city streets and businesses cautiously reopened, emissions were nearly back to their pre-pandemic levels.