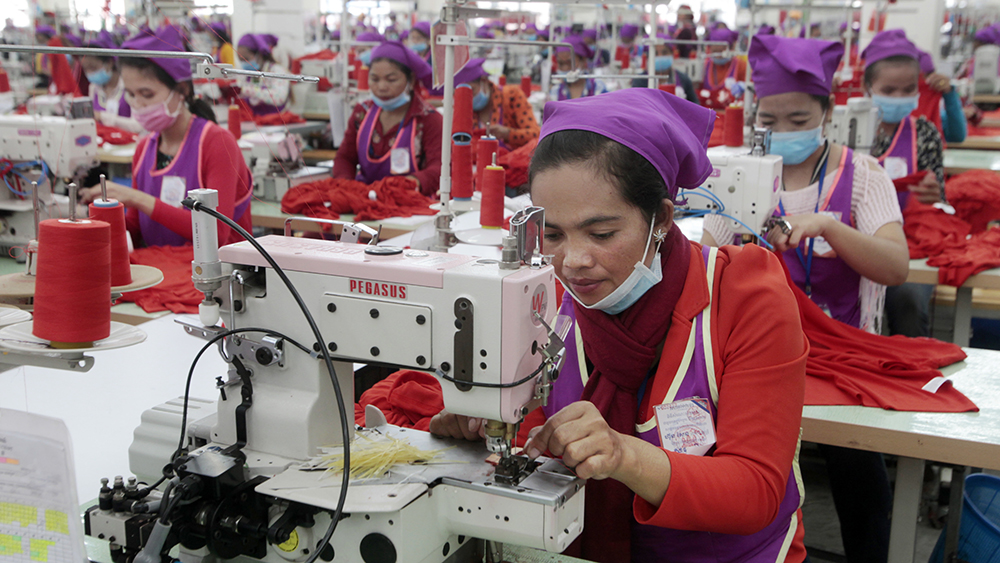 A Cambodian union leader has expressed alarm after major clothing makers earlier this month penned a joint letter warning that increased coal consumption could make the country less competitive than more environmentally conscious neighbors in the eyes of green-minded investors.

Factories in the Southeast Asian country make clothes for the world’s top brands, who are drawn by relatively low labor costs, but also face international scrutiny of their envoronmental and labor practices.

“We know that key buyers like Nike, Adidas, and H&M are very cautious of their obligation to the principals of fair trade,” Ath Thun, president of the Cambodian Labor Confederation, told RFA’s Khmer Service.

“Due to their respect for the environment, they are encouraging green energy like solar, wind and water power,” he said.

These big clients’ policies could make it hard to ignore Cambodia’s plans to boost power generation from coal by building new coal projects and signing a deal with neigboring Laos to purchase more electricity, also from coal-fired plants.

Cambodia suffered severe droughts in 2019 and 2020 that decimated hydropower output.

Looking to solidify its power grid against possible future droughts brought on by climate change, Cambodia plans to bring four coal-fired power plants into operation. Two of the plants are under construction and expected to be completed in 2021 and 2022.

The Nikkei Asian Review recently reported that by 2020, Cambodia would rely on fossil fuels for 80 percent of its power needs.

“The coal power plants bring another layer of concern to us on top of the unsolved EBA partial withdraw,” said Ath Thun, referring to the EU’s “everything but arms” scheme, through which Cambodian products enjoyed duty-free, quota-free access to the bloc’s market which accounted for 20 percent of the country’s exports.

But the Cambodian garment industry suffered a blow to its competitive position this week, when the EU withdrew from the scheme in response to the government’s failure to reverse rollbacks on democracy and human rights required under the trade arrangement.

“We are worried when buyers are worried. Now that they have raised this concern, I think the government should reconsider its source of energy by looking into greener energy,” Ath Thun said.

RFA attempted to contact Cambodian Government spokesman Phay Siphan, and Director-General Victor Zona of the Ministry of Industry Mines and energy, but neither could be reached for comment.

Zona told local media that the government was aware of coal’s potential impact.

“We have balanced the environmental impacts and sustainable energy in Cambodia,” he said.

“Renewable energy like solar power depends on the daylight. At night it cannot generate energy. How could we rely only on such a power source? This is why we have to resort to various sources of energy, including coal power plants,” he added.

“I don’t understand why Cambodia cannot do as what Vietnam, Japan and other countries do. Those countries have regarded coal power as an outdated dirty technology, that is detrimental to the environment and public health,” he said.

“Why does the government not find better alternative sources of energy that are greener to the environment?” he added.

According to the Union of Concerned Scientists, air pollution from coal-fired power plants can be linked to asthma, cancer, heart and lung ailments, neurological problems, acid rain, global warming, and other severe environmental and public health impacts.

Human rights abuses related to Cambodia’s coal power plants have also occurred—the government allowed the plants to be built on or near land occupied by rural villagers.

At least 30 families in two villages in Thma Sar commune, Botum Sakor district, Koh Kong province, face future eviction from their lands due to the nearby coal power project, one of the two plants currently under construction.

“If the government cared about the livlihood of workers and the general public, they would have conducted an independent feasibility study and research before granting licenses to those companies,” the CNRP’s deputy president, Mu Sochua, told RFA.

She said Cambodia lacks an adequate checks and balance system under its one party government, especially since the opposition party was unconstitutionally dissolved in 2017.

“If the government paid attention to the impacts of the coal projects, they would be able to make the most of all available reports and studies by scientists around the world,” she said.

“We need nothing less than absolute transparency for each project. We need the government to not suppress people who raise their concerns about these issues. Cambodia does not belong to just the ruling party. It belongs to all Cambodians,” she added.