Any conditions that compel the teacher to take note of failures rather than of healthy growth give false standards and result in distortion and perversion. 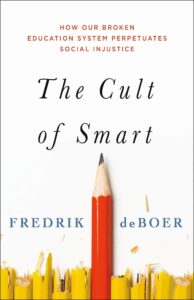 Academic Fredrik deBoer has written a book, The Cult of Smart: How Our Broken Education System Perpetuates Social Injustice (All Points Books, 2020), that questions the enormous value attached to people based on their academic talent. The author defines the Cult of Smart thus: “It is the notion that academic value is the only value, and intelligence is the only true measure of human worth. (p 5-6)

I am of the mind that if the average person puts in sufficient effort and the environment is not prohibitive, then such a person can attain her academic goals. I have never thought that the degree of difficulty or ease of learning would be the same for each person. I considered this to be the case in most fields of endeavor be it sports, art, writing, music, etc. However, the truly elite levels would favor those who had the predilection, natural gifts, and put in the effort to succeed in a chosen field.

DeBoer departs from the convention thought that holds academic success is tied to effort; he acknowledges that there is inequality on academic aptitude.

DeBoer does not refrain from emphasizing that there is a strong genetic component to intelligence, but he also acknowledges the role of the environment, even stating, “Profoundly unequal environments for children can drown out genetic effects. (p 23) He downplays group genetic differences and focuses on individual genetic differences. Intelligence is not attributed to group membership.

DeBoer opposes “the great American obsession with appearing intelligent above and beyond all things, the one thing that is thought to define us and our worth.” (p 13)

The author also criticizes the notion of a meritocracy: “Only the false god of ‘equality of opportunity’ keeps the fiction of meritocracy plus equality alive.” (p 29)

I agree; it is exactly because there is no equality of opportunity and no equality of conditions that meritocracy is an illusion. I wrote about this previously:

Just because people speak of a meritocracy as if it exists does not mean it does exist.

If people want to posit something exists, then they should provide evidence of its existence. A meritocracy patently does not exist in most societies, and this is obviously so in education.

Why do I say so? Some people will object saying that Kindergarten to grade 12 education is free for everyone, and that textbooks are supplied by the schools, and that everyone writes the same or similar tests which determine the grade each student merits.

DeBoer writes, “To recognize that our abilities lie outside our control woud be to strike the hardest possible blow against meritocracy.” (p 239)

Once the notion of meritocracy is dispelled, then the differential rewarding of people according to their academic performance and credentials comes into question. DeBoer identifies the capitalist system as the culprit. The education system is not a mitigating factor for inequality; deBoer writes that it “deepens inequality, sorting winners from losers and ensuring greater financial rewards to the former.” (p 50)

DeBoer argues that even if there were perfect equality of conditions, “the untalented” would not all succeed. (p 62)

In Chapter 5, deBoer states that school quality doesn’t matter much and test prep doesn’t work. What matters is academic talent.

Given the economic disparities associated with the range of academic performance, deBoer argues that a reworking of the social contract is called for. (p 121) The approach he favors is an ethical one: “We must move to a vision of human equality based on the equal right of all people to a good life.” (p 163) Who would argue against everyone having a good life? DeBoer writes, “There is no a priori reason for society to privilege the interests of the talented, and no clear justification for a system of genetic aristocracy.” (p 154)

In the chapter “Realistic Reforms” he calls for an education revolution. This starts by killing the Cult of Smart. (p 2020). It can be achieved by reforms such as lowering the legal dropout age to 12, eliminating enforced competition, and loosening standards. DeBoer writes that low passing rates can cause harm. But this writer wonders why any young learner should fail. In the advanced economies of Japan and Korea there is no compulsion to repeat a grade.

In chapter 9, “A World to Win,” the author promotes the people-centered system of socialism. There are, accordingly, “No Gods, No Masters, No Smart Kids.” (p 202)

One point seemed overlooked in the book. Since it is crucial to the book’s discussion, intelligence should have been defined. When one looks up intelligence in the index, it comes up only as paired with IQ. That IQ is a true depiction or accurate reflection of intelligence is highly debated.

The Cult of Smart is particularly focused on American perspectives regarding education and academic success. North of the United States, the elementary schools, high schools, and universities one attends is usually determined by which is nearest to where one lives. Unlike the US, the Canadian public schools and public universities are generally not considered to differ in the quality of education delivered. So which Canadian university one graduates with a bachelor degree from plays little role in employability.

However, The Cult of Smart opens a window into reforms that would undoubtedly benefit learners in schools in many countries, including Canada. DeBoer has critically pondered who we are, what diversity means in education, what education means for learners as individuals, and how improvements in education and society can be brought to fruition.

The Cult of Smart is an excellent read whose solutions should be given deep consideration for implementation.

This article was posted on Thursday, August 20th, 2020 at 5:53pm and is filed under Book Review, Capitalism, Education.