The Republican and Democratic Party conventions showed that both major parties are failing to control the pandemic and protect people, address the climate crisis and clean up the environment, support families and businesses during the economic collapse, prevent police violence or deal with any of the other major problems we face.

These were two substance-less conventions. The Democrats focused on criticizing Trump without putting forward an agenda while the Republicans claimed Biden was a front for socialism when he is a deeply embedded corporate Democrat. Trump’s term as president has been a disaster and Biden has been consistently on the wrong side of history over his 47 years in politics. On issues today, both are out of step with the views of the majority of voters.

The two parties demonstrated that people must lead from below because the parties represent the wealthy and transnational corporations. We must continue to organize and build popular power if we are to win the changes we need.

Join us for a webinar and rally on Sunday, August 30 at 2:00 pm Eastern to learn how people can build power to shape the future.

The Two Parties Have Failed Us, But The People Can Succeed

At the Democratic Convention, no one used the phrases Medicare for all, Green New Deal, tuition-free college and vocational school, universal basic income, or wealth tax, even though all of these issues are supported by the majority of voters. Sen. Bernie Sanders, AOC, and Andrew Yang were silenced on issues they had championed during their campaigns.

The United States is in crisis because the two-party system has failed the people and the planet. On a global scale, the United States is rated as a “flawed democracy” and corruption is on the rise. Studies within the United States find that popular support for a policy has no impact on whether it will be made into law by Congress, while wealthy interests have a significant impact over whether a law passes or fails. This is consistent with the United States being a plutocracy ruled by the wealthy.

As we have written in the past, the United States is a mirage democracy where the candidates are largely chosen by the power holders and the people get to vote for one or another corporate-approved candidate. A few progressive candidates are elected from time to time but they are marginalized at the federal level. If they do gain power, the elites move swiftly to rein them in or redistrict them out.

For this reason, many people throw up their hands and decide that trying to work within the two-party system is the only available option, as flawed as it is. But, where has that gotten us? Federal elections these days are more commonly about voting against what you don’t want rather than voting for what you do want. Lesser evil voting has driven a race to the bottom in the quality of the candidates because as long as people are voting out of fear, it doesn’t matter who the candidate is or what they stand for.

Trump and Biden as the major party presidential candidates this year are the result of the system we have. Whichever one wins in November, the outcome will still be a plutocracy. The climate crisis will still rage on with climate-transformed wildfires, derechos, and drought that destroy crops and strong hurricanes that flatten towns but the Green New Deal will be off the table. The COVID-19 pandemic will continue to sicken and kill hundreds of thousands but Medicare for All won’t be an option. Workers will still be forced to work for low wages in unsafe conditions, families will lose their homes and students will be buried under heavy loans, but when Wall Street corporations or banks need help, the Federal Reserve will whisk their troubles away to the tune of trillions of dollars. Wars and interventions will continue as the Pentagon receives record budgets year after year, but for some reason, there isn’t enough money to fund our public schools, feed hungry families, or rebuild our failing infrastructure.

This system is protected by a security state that has no regard for human life, especially if you are black or brown. Time and again, the legal system lets the police get away with cold-blooded murder. This lack of accountability emboldens law enforcement. And now, it is clear from the recent events in Kenosha Wisconsin, and even before that, those right-wing militias are an unofficial arm of the security state. If this continues and they are not held accountable, they will also be emboldened to kill with impunity.

This is the reality in which we live. It is not the first time in history that this situation has existed in the world but it is unique to our generations in this country. We are living in a dark period, a failing state, and changing this situation is going to take hard work and sacrifice, but history also teaches us that people do have the power to take on the power elites and win.

After the DNC-RNC We Can’t Breathe: Keep The Struggle In The Streets, Webinar and Rally, Sunday August 30 at 2:00 pm Eastern. 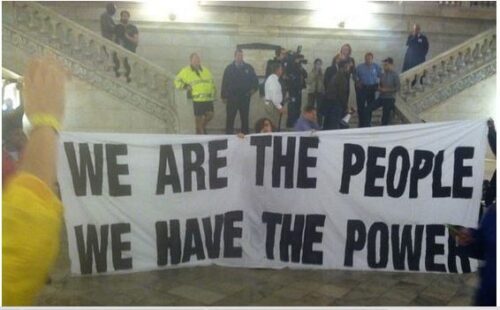 People have the power; protest in Ferguson City Hall in 2014

Building Power To Lead From Below

We are in the midst of a national uprising on multiple fronts of struggle. There are widespread protests against racist police violence and there have been more than 900 wildcat strikes since March over worker safety and low pay. Teachers are striking over school reopenings. There are ongoing protests stopping pipelines and extreme energy extraction projects as well as demanding action on the climate crisis. Just last week, there was a national day of protest involving actions in hundreds of cities to save the US Postal Service.

Since the Occupy protests of 2011, which focused on wealth inequality and political corruption, but also included system-wide change on low wages, police violence, the climate crisis, and student debt, people have been building deeper movements in all of these areas. During the Obama-era, the Fight for $15 began, along with Black Lives Matter, immigrant rights, climate, and debt protests. When the pandemic and recession began, people started organizing General Strike and Rent Strike campaigns

The potential for people power has never been greater. Hundreds of thousands of people are ready to take the streets and stop business as usual. This is a time when every one of us has a role to play, whether it is sharing information in our communities (being the media), starting conversations in our social circles (education), organizing and mobilizing people in the groups we belong to or providing support for our neighbors and people who are in the streets (mutual aid). Learn how social movements create transformational change in our free online course.

No matter what happens this November, the protest movement must continue to fight for economic, racial, and environmental justice as well as peace. The next presidential Inauguration Day will need to be a day of protest when more people come to Washington, DC to make demands of the next president than are there to celebrate him.

The growing movement of movements has a broad foundation of education, organization, and mobilization on which to build. We have the ability to make this country ungovernable and if we use that power, we can make demands that cannot be ignored.