A Papua New Guinea court has given police three more weeks to submit their evidence against Bosip Kaiwi, who is accused of the murder of his partner in a high-profile case that shocked the nation – or their defence lawyer will be allowed to apply that it be dismissed.

Kaiwi, 25, of Minj, South Waghi, Jiwaka, appeared in court for the third time yesterday since his arrest on June 25.

He is charged with the wilful murder of his partner, Jenelyn Kennedy, the mother of their two children, on June 23 in Port Moresby.

Magistrate Tracy Ganaii yesterday told police prosecutor Chief Sergeant Polon Koniu at the Committal Court in Waigani that the three months normally given to police to complete investigations would end on September 30.

She therefore adjourned the case to October 1.

Covid-19 delays
Gwampom explained in the letter that the investigation was taking a long time because of the covid-19 social distancing restrictions and that he needed more time to: 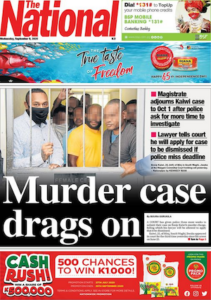 Kaiwi’s lawyer, Samuel Inisi, of Inisi Lawyers did not object to the adjournment but indicated that he would submit “appropriate applications” on October 1 if police files were still not ready then.

Magistrate Ganaii said she allowed the adjournment because the three months police were allowed to complete investigations had not lapsed.

“If a case goes past three months, by practice, the defendant is automatically entitled to be discharged, unless the prosecutor have very good reasons to justify why there should be a further adjournment,” she said.

‘More work needed’
“The court has received that letter and considered that there is more work to be done on the investigations.”

She noted defence lawyer Inisi’s comments that he could ask the court that Kaiwi be discharged for want of police file on October 1.

“The court will consider the application when it’s made at the appropriate time,” she said.
Kaiwi was alleged to have tortured his partner between June 18 and 23.

She died on June 23 after five days of alleged assault.

Her body was left at the Port Moresby General Hospital where a doctor pronounced her dead.

Kaiwi was arrested and charged on June 25.

The Pacific Media Centre republishes The National articles with permission.