A picture of actor Amitabh Bachchan has gone viral recently, allegedly from his recent visit to the Haji Ali Dargah in Mumbai. It is being claimed that he made the offering of a chaddar (sheet) in the mosque. Social media users have been sharing this image discussing how even though Hindu temples held prayers and ceremonies for his recovery, he instead went to the Sufi shrine to offer a sheet once he got better. We would like to point out that Bachchan had informed the public about testing positive for coronavirus in a tweet on July 11, 2020. He was discharged on August 2, 2020, once his reports came back negative for the virus.

A user shared the image on a Facebook group called ‘Desh Ki Pukar Hindu Rashtra Shri Ram Rajatilak‘ with the same claim and called for a boycott of ‘Kaun Banega Crorepati’ (archived version of the post). Another Facebook user posted this picture on September 12.

It had also been shared on Twitter with users claiming it’s a recent image. 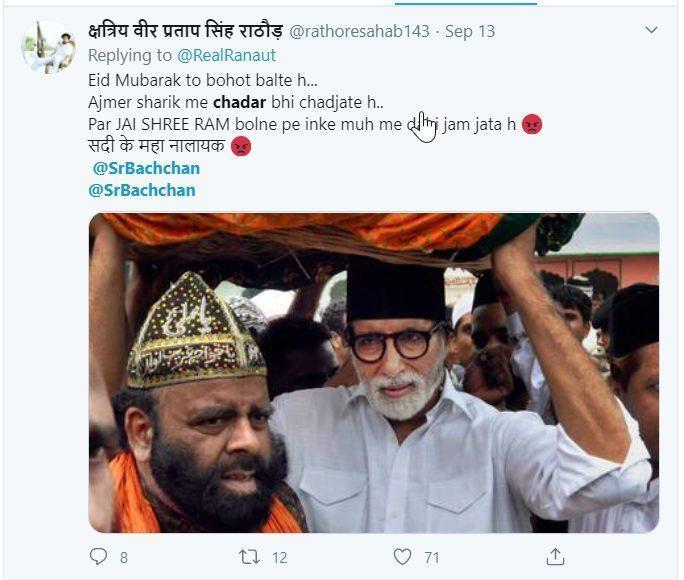 We also received a few requests to verify the picture on the Alt News official Android app.

A reverse image search revealed that this picture is not recent and was taken in July 2011. An article by Aaj Tak from July 5, 2011, had some photos of the actor’s trip to Ajmer Sharif in Rajasthan, which include the image that has currently gone viral. In these photos, the veteran actor can be seen dressed in the same clothes that he is seen wearing in the image in question. According to the article, he had come to Ajmer Sharif after 40 years. Here, he offered a sheet to the shrine and untied a sacred wish thread to commemorate a wish from 40 years ago getting fulfilled. This photo of the Bachchan’s visit to Ajmer Sharif had also been included in a photo story by India Today dated July 4, 2011.

Bachchan himself had written about this trip to Ajmer Sharif in a series of tweets.

He can be seen inside the Ajmer Sharif Dargah in NDTV’s video report from July 5, 2011. We would also like to point out that there has not been any news of him going to the Haji Ali Dargah recently.

The being made online about Amitabh Bachchan’s recent visit to the Ajmer Sharif Dargah are incorrect. Along with the picture, users have been calling for a boycott of his show, ‘Kaun Banega Crorepati’. The picture being shared with these claims was actually taken when the actor had visited the shrine back in July 2011.