In this segment of my confessions and polemics I discuss the following topics: Attending the Jimmy Dore Show, The 2020 Democratic Convention, and Daoist Anarchism.

As someone in her early 70s I don’t get out much, especially during the COVID quarantine. But last February before the stay-at-home orders my cousin, Robert, bagged a couple of tickets to the Jimmy Dore Show in Sacramento. So I hopped on my motorcycle and made the trip. I came back the next morning.

Robert and I are the same age. We were at Cal at the same time and we’re close. But at Cal we hung with different crowds. Like me, Robert was not into drugs. But his friends and roommates were. Some of the things his friends did were shocking, even for a person like me who was in Berkeley in the 60s.

We’re close, but there are some are some differences between Robert and me. I’ve told some of my Bay Area acquaintances that Robert is a little further left on the political spectrum than I am. So far, not one of these acquaintances has believed it. But none of them have met my cousin.

Growing up in Sacramento, Robert didn’t have the intellectual and cultural challenges I faced growing up in Bakersfield. Relative to a lot of other places, Sacramento living is easy. I was visiting my aunt once and picked up a book she had that had been published by a Sacramento Chinese cultural group. It had photos and information from the 1880s to whenever the book was published, in the 1990s or whatever. I don’t remember. The book posed the question of why San Francisco had a large Chinatown and Sacramento did not. The answer the book gave was that a large Chinatown is a sign of discrimination against the Chinese. The fact that San Francisco developed a large Chinatown meant that the Chinese were not accepted into the larger society. In fact, at one time Chinese children were not allowed to attend San Francisco public schools. The Sacramento story is as follows. The Chinese arrived during the Gold Rush and congregated at 3rd and I Streets. The Chinese merchants there supplied the miners heading to the gold fields with needed goods. When the gold rush was over these merchants opened grocery stores in the residential areas of the city. They then moved into these neighborhoods to be by their stores and they were accepted by the whites. Hence, there was never a need for a Chinatown in Sacramento.

In Bakersfield the discrimination was not just racial or ethnic. Bakersfield has a history of class discrimination. Poor whites from Oklahoma died as a result of being shot in the streets or being refused admittance to hospitals when sick. But that was in the old days. Bakersfield has gotten a lot bigger. I assume it’s changed and lost its small-town atmosphere. I don’t know. I don’t go there. Fortunately for me, living is easy on Richardson Bay.

Up to point it’s fun being with Robert. He knows where to find the balanced craft beers in the Sacramento Area microbreweries, and I appreciate that. He knows I prefer the ales of Oregon and Washington to those of California. But his anger and cynicism can become oppressive at times. That’s why I left the following morning. I feel sorry for his wife. She’s a sweetie pie but has to live with him. One night after a couple of pints Robert confessed to me that at times he finds it difficult living with himself. Later in this book I hope to write about his experiences in the army in Vietnam.

Both the Friday and Saturday Jimmy Dore shows in Sacramento were sold out. We were there Friday night. Robert and I were by far the oldest people there. Most were in their 20s and 30s. But I felt at home like I had not in some time. The place was absolutely raucous. They all seemed to love Jimmy. Most seemed to be Bernie and Tulsi supporters. In fact, the Tulsi folks seemed to be using the performance as an organizing event. I just loved it.

A few days after Jimmy’s show I heard from a friend who had attended the sold-out San Jose show. He mentioned the rage. And then I understood what we had seen in Sacramento. It was rage. A large part of the millennial generation is feeling rage. I think that’s part of why I felt so at home at Jimmy’s show. Some on the Left say that the world’s elites do not understand the forces arrayed against them. This is said to be particularly true of the American elites. For me the 60s always provides context, and so all this reminds me of the lyrics of Bob Dylan’s “Ballad of a Thin Man”: “But something is happening and ya’ don’t know what it is do you, Mister Jones?”

My partner had the TV on for the Democratic convention. I’m not sure but I think my partner might be voting for Biden. At any rate, I’d be watching the convention while we were having dinner. I did not see much of the convention, but I thought that a lot of what I did see was Orwellian.

One night I became enraged watching a singer walking through some funky urban scene. It reminded me of the old Levi jeans commercials years ago. You’d see hipsters wearing blue jeans and dancing or hanging out or whatever in a rundown urban environment. It’s always struck me that this kind of stuff, showing how hip and happy one can be as an economically downtrodden person, was a way to get people used to the increasing economic disparities in the U.S. Like who cares about the 1% when you can be so hip in the 99%? The Democrats appeared to be repeating the Levi message.

At any rate, taking my plate I left the table in a rage and began eating in the bathroom. It didn’t take me long to see the error of my ways, and I returned to the table to make two apologies. I apologized to my partner for leaving. And I told my partner that I was apologizing to myself for violating my Daoist principles. I violated Sun Tzu’s principle that one should know one’s enemy. You can’t know your enemy if you’re not watching his convention.

Meanwhile Krystal and Saagar at The Rising, as well as Kyle Kulinski, covered a bit of the fawning reaction to the convention displayed over at MSNBC. This had the effect of me changing my opinion of MSNBC. I used to watch that network many years ago but in recent years have seen it as the network for self-righteous, narrow minded, Puritanical liberals. But watching Joy Reid, Rachel Maddow, and Nicolle Wallace, it struck me that it’s a network for people in some kind of cult.

Earlier I predicted that the United States has lost so much credibility in the world that it will either censor or otherwise firewall the Internet. I now make my second prediction. If Joe Biden wins the election, he will be the last Democratic president to do so. Neither he personally, nor the party he represents, is even close to being able to solve the depression the country is facing. They don’t even have a plan. They don’t see the forces arrayed against them. They are oblivious to the rage. The Democratic Party has exhausted its role in history.

As an old person living on a houseboat in Sausalito I’m asked, with irritating frequency: “Did you know Alan Watts?” I’m not that old. Alan Watts was born before my parents were. And, sadly, Alan Watts died at a relatively young age. I came here years after Watts had died. Watts lived on The Vallejo, which is a hotel compared to my little setup.

While Alan Watts had varied intellectual interests, he was most famous for being an adherent of Zen Buddhism. As I understand it, Zen is the Japanese cultural manifestation of Chinese Chan Buddhism, which in turn is some kind of amalgamation of Daoism and Buddhism. I am not here to insult Buddhists. I’ve always liked the Buddhists I’ve known. I don’t want to start a fight with anyone. But as far as Chan and Zen are concerned, my question has always been: why Buddhism? Daoism is complete. I don’t know how it can be meaningfully added to. I’ve walked into book stores, opened up books on Zen, and seen that some of the stuff on death has been lifted from The Zhuangzi.

As I’ve indicated earlier, Daoism is based on empirical evidence. It is reality based. It’s a philosophy of radical liberty and human equality. Nature is considered sacred. And from this, anarchism can be derived.

Consider Yuan Yao’s landscape painting “Hall of Green Wilderness.” If you click on the photo of the painting, you can enlarge it for a better view. If you look at the foreground, you see that the hall depicted zig zags. It’s constructed so as to avoid interfering with the rocks and trees. The rocks and trees are “free.” They are free from destruction. The superior person “leaves the gold buried in the mountains and the pearls in the deep.” 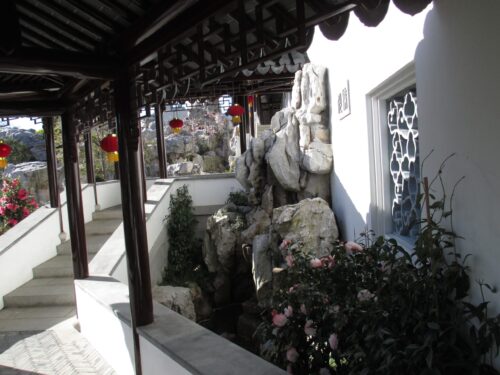 In Daoism nature is sacred. People are part of nature and are to be respected. The individual is to be left free to live according to her nature. This is not an individualism that conflicts with the community. As long as the yin and yang are not out of harmony, there is not supposed to be exploitive relationships. “In the age of perfect virtue men lived in common with birds and beasts and were on terms of equality with all creatures, as forming one family.” (p. 134)

Throughout its centuries-long history philosophical Daoism has ranged from being anarchistic to being anarchist. This history is the subject of John A. Rapp’s book Daoism and Anarchism: Critiques of State Autonomy in Ancient and Modern China (Continuum 2012). Rapp treats the history of Daoism, Chinese anarchism, and politics from centuries before the common era to Chinese Communist Party politics in the late 1980s.

In the appendix to Rapp’s book he reproduces some of the works of Daoist Anarchism. One is chapter 9 of Zhuangzi, “Horses’ Hoofs” (Rapp) or “The Hoofs of Horses” (Hochsmann & Guorong). We’re told that the nature of horses is to feed on grass, drink water, prance and leap. When they are angry they kick each other. When they are content they rub their necks together. After the horse trainer Bo Le arrived:

“Men further exposed them to hunger and thirst, trained them to gallop and race and to keep a regular pace with others. In front were the evils of the bit and the ropes, and behind was the fear of the whip and crop. Treated like this, more than half of them died.” (Hochsmann & Guorong, p. 133.) In ancient times people lived peacefully with other creatures in a classless society. (p. 133) But this harmony was broken up by those using benevolence and righteousness to govern the world. (p.134)

Daoism describes a natural anarchist-communism. It is healthier than the communism of St. Benedict. Unlike the Zen theorist, I see no reason to add to it.

This article was posted on Sunday, September 13th, 2020 at 7:00pm and is filed under General, Opinion.