One of the hallmarks of totalitarianism is mass conformity to a psychotic official narrative. Not a regular official narrative, like the “Cold War” or the “War on Terror” narratives. A totally delusional official narrative that has little or no connection to reality and that is contradicted by a preponderance of facts.

Nazism and Stalinism are the classic examples, but the phenomenon is better observed in cults and other sub-cultural societal groups. Numerous examples will spring to mind: the Manson family, Jim Jones’ People’s Temple, the Church of Scientology, Heavens Gate, etc., each with its own psychotic official narrative: Helter Skelter, Christian Communism, Xenu and the Galactic Confederacy, and so on.

Looking in from the dominant culture (or back through time in the case of the Nazis), the delusional nature of these official narratives is glaringly obvious to most rational people. What many people fail to understand is that to those who fall prey to them (whether individual cult members or entire totalitarian societies) such narratives do not register as psychotic. On the contrary, they feel entirely normal. Everything in their social “reality” reifies and reaffirms the narrative, and anything that challenges or contradicts it is perceived as an existential threat.

These narratives are invariably paranoid, portraying the cult as threatened or persecuted by an evil enemy or antagonistic force which only unquestioning conformity to the cult’s ideology can save its members from. It makes little difference whether this antagonist is mainstream culture, body thetans, counter-revolutionaries, Jews, or a virus. The point is not the identity of the enemy. The point is the atmosphere of paranoia and hysteria the official narrative generates, which keeps the cult members (or the society) compliant.

In addition to being paranoid, these narratives are often internally inconsistent, illogical, and … well, just completely ridiculous. This does not weaken them, as one might suspect. Actually, it increases their power, as it forces their adherents to attempt to reconcile their inconsistency and irrationality, and in many cases utter absurdity, in order to remain in good standing with the cult. Such reconciliation is, of course, impossible, and causes the cult members’ minds to short circuit and abandon any semblance of critical thinking, which is precisely what the cult leader wants.

Moreover, cult leaders will often radically change these narratives for no apparent reason, forcing their cult members to abruptly forswear (and often even denounce as “heresy”) the beliefs they had previously been forced to profess, and behave as if they had never believed them, which causes their minds to further short circuit, until they eventually give up even trying to think rationally, and just mindlessly parrot whatever nonsensical gibberish the cult leader fills their heads with.

Also, the cult leader’s nonsensical gibberish is not as nonsensical as it may seem at first. Most of us, upon encountering such gibberish, assume that the cult leader is trying to communicate, and that something is very wrong with his brain. The cult leader isn’t trying to communicate. He is trying to disorient and control the listener’s mind. Listen to Charlie Manson “rapping.” Not just to what he says, but how he says it. Note how he sprinkles bits of truth into his stream of free-associated nonsense, and his repetitive use of thought-terminating clichés, described by Robert J. Lifton as follows:

The language of the totalist environment is characterized by the thought-terminating cliché. The most far-reaching and complex of human problems are compressed into brief, highly selective, definitive-sounding phrases, easily memorized and easily expressed. They become the start and finish of any ideological analysis.

If all this sounds familiar, good. Because the same techniques that most cult leaders use to control the minds of the members of their cults are used by totalitarian systems to control the minds of entire societies: Milieu Control, Loaded Language, Sacred Science, Demand for Purity, and other standard mind-control techniques. It can happen to pretty much any society, just as anyone can fall prey to a cult, given the right set of circumstances.

Most people cannot see that it is happening, for the simple reason that it is happening to them. They are literally unable to recognize it. The human mind is extremely resilient and inventive when it is pushed past its limits. Ask anyone who has struggled with psychosis or has taken too much LSD. We do not recognize when we are going insane. When reality falls apart completely, the mind will create a delusional narrative, which appears just as “real” as our normal reality, because even a delusion is better than the stark raving terror of utter chaos.

This is what totalitarians and cult leaders count on, and exploit to implant their narratives in our minds, and why actual initiation rituals (as opposed to purely symbolic rituals) begin by attacking the subject’s mind with terror, pain, physical exhaustion, psychedelic drugs, or some other means of obliterating the subject’s perception of reality. Once that is achieved, and the subject’s mind starts desperately trying to construct a new narrative to make sense out of the cognitive chaos and psychological trauma it is undergoing, it is relatively easy to “guide” that process and implant whatever narrative you want, assuming you have done your homework.

And this is why so many people — people who are able to easily recognize totalitarianism in cults and foreign countries — cannot perceive the totalitarianism that is taking shape now, right in front of their faces (or, rather, right inside their minds). Nor can they perceive the delusional nature of the official “Covid-19” narrative, no more than those in Nazi Germany were able to perceive how completely delusional their official “master race” narrative was. Such people are neither ignorant nor stupid. They have been successfully initiated into a cult, which is essentially what totalitarianism is, albeit on a societal scale.

Their initiation into the Covidian Cult began in January, when the medical authorities and corporate media turned on The Fear with projections of hundreds of millions of deaths and fake photos of people dropping dead in the streets. The psychological conditioning has continued for months. The global masses have been subjected to a constant stream of propaganda, manufactured hysteria, wild speculation, conflicting directives, exaggerations, lies, and tawdry theatrical effects. Lockdowns. Emergency field hospitals and morgues. The singing-dancing NHS staff. Death trucks. Overflowing ICUs. Dead Covid babies. Manipulated statistics. Goon squads. Masks. And all the rest of it.

Eight months later, here we are. The Head of the Health Emergencies Program at the WHO has basically confirmed an IFR of 0.14%, approximately the same as the seasonal flu. And here are the latest survival rate estimates from the Center for Disease Control:

The “science” argument is officially over. An increasing number of doctors and medical experts are breaking ranks and explaining how the current mass hysteria over “cases” (which now includes perfectly healthy people) is essentially meaningless propaganda, for example, in this segment on ARD, one of the big mainstream German TV channels.

And then there is the existence of Sweden, and other countries which are not playing ball with the official Covid-19 narrative, which makes a mockery of the ongoing hysteria. 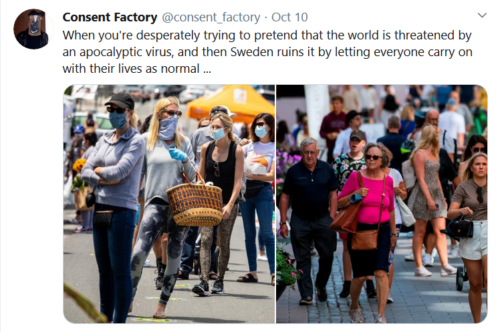 I’m not going to go on debunking the narrative. The point is, the facts are all available. Not from “conspiracy theorist” websites. From mainstream outlets and medical experts. From the Center for Fucking Disease Control.

Which does not matter in the least, not to the members of the Covidian Cult. Facts do not matter to totalitarians and cult members. What matters is loyalty to the cult or the party.

Which means we have a serious problem, those of us to whom facts still matter, and who have been trying to use them to convince the Covidian cultists that they are wrong about the virus … for going on eight months at this point.

While it is crucial to continue reporting the facts and sharing them with as many people as possible — which is becoming increasingly difficult due to the censorship of alternative and social media — it is important to accept what we are up against. What we are up against is not a misunderstanding or a rational argument over scientific facts. It is a fanatical ideological movement. A global totalitarian movement … the first of its kind in human history.

It isn’t national totalitarianism, because we’re living in a global capitalist empire, which isn’t ruled by nation-states, but rather, by supranational entities and the global capitalist system itself. And thus, the cult/culture paradigm has been inverted. Instead of the cult existing as an island within the dominant culture, the cult has become the dominant culture, and those of us who have not joined the cult have become the isolated islands within it.

I wish I could be more optimistic, and maybe offer some sort of plan of action, but the only historical parallel I can think of is how Christianity “converted” the pagan world … which doesn’t really bode so well for us. While you’re sitting at home during the “second wave” lockdowns, you might want to brush up on that history.

This article was posted on Tuesday, October 13th, 2020 at 4:28pm and is filed under COVID-19, Lockdown, Mind Control, Narrative, Opinion.