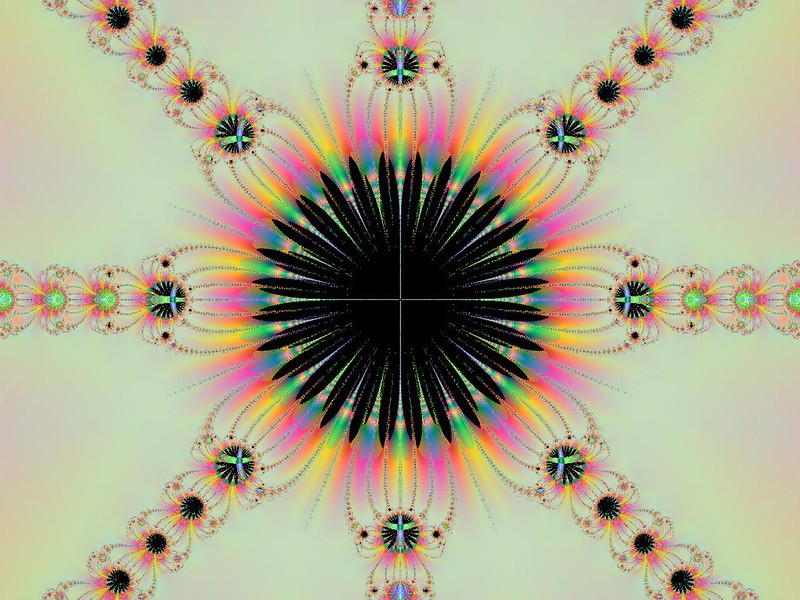 “The Map is not the territory.”

“It is not down on any map; true places never are.”

A fractal state of the psyche is mirrored in the fractal state of our culture but more encompassing and macro is the fractal state of reality. We live on islands of order in a sea of disorder, on maps of the territory of reality that are only representations of that territory. Part of the present foundering, growing confusion, fears and wild attacks in every direction can be traced to a destabilizing awareness of the ungrounded condition of truth and reality. An awareness of sudden traumatic impact. “Rational categories,” Berardi writes, “have lost their grasp on our social becoming.” We live now in a “post-rational condition.”

Another factor here can be traced to an imposed, usurping order of things that has led to a vicious dividing of both psyche and culture, a fragmentation that is nurtured in the hyperreality of cyberspace. This is a breaking apart fragmentation that does not represent but rather distorts and diminishes a fractal complexity in which there is a relationship between fractals and the whole, an order of separate and distinguishable unities, a distinguishable order shaped in variant dimensions we cannot map. No imposed order can hold off the dissent inherent in our fractal territory.

The mapping of our fractal territory is designed by power. The signing amoral telos has been since the last third of the 20th century the rule of “The Efficient Market Hypothesis” which serves as alibi for an economics of zero-sum competitiveness leading to wealth growth through domination. That quest for efficiency in terms of minimum investment/high returns has overlaid a hyperreality upon the increasing immiseration of the many and the compounding of wealth and power for the few.

A mapping of simulation and simulacra axiomatically emerged to replace the hard realities of worker, consumer and environmental and species degradation.

A consumer led capitalism requires a campaign of product and services hype in order to seduce consumers. An overlay of bullshit, unconcerned with the truth of anything, has proven to be more seductive than the operations of reason and reality. A simulacrum of being that fits the powerful role of consumer emerges in which consumer choice is an act of ontological fulfillment and the consumer becomes the Primer Chooser, an autonomous, self-determined entity.

Some self-anointed, grandiose entities evolve quite naturally in a competitive clime and thus the spin and spectacle of fame, wealth and power adds color to the dull palette of rapacious economics. Early on the hyperreal is Hollywood-ized and Disney-ized, displacing the hard bones of realities exploited, victimized, degraded and later on with the market’s minions, AI and robotics, on the map, humans are scheduled for extinction, as is the planet’s cornucopia of species, in the lunacy of a Dr. Strangelove return in the hyperreal.

This mapping as a structuring serving an economics moves from production and consumption to the turbo charged dark arts of financialized capitalism, an esoterica entanglement of individuals, societies and globe whose dark incantations are algorithms and not “eye of newt and toe of frog.” Throughout the transition of market rule from production and consumption to an algorithm tooled techno-financial rule hyperreality has been the map replacing the territory, which remains fractal regardless of the coherences, continuities and unity that hyperreality fantasizes.

The illusions of individual autonomy, of endless growth through competitive domination, and market efficiency faith can only be happily and wondrously realized in the fraudulence of hyperreality. When the territory, which is not the map, is fractal, the realities of those fractal sites, of that fractal disorder, overspill that mapping. A fractal politics is an observation and recording of that over-spillage, disclosing territories of the real obscured by, and not on the mapping of, the hyperreal narrated by what Bifo Berardi calls “the ferocity of our financial mathematics,” the dictatorship of our “techno-linguistic automatisms.”

The hyperreal has been nurtured both online and offline, cyberspace offering itself as a platform for the hyperreal. This introduces something historically new in the relation between territory and cultural mapping. There have been other implantations in the West upon the fractal territories of psyche and society such as the reign of a Pax Romana followed by the reign of the Roman Catholic church until the Protestant fracturing and then an Enlightenment which has been tattered by 20th century modernism and deconstructed by postmodernity, these last two fractals without hegemony. The master narrative of an economic order we have now is both historically new regarding its domination of the political sphere but also regarding the presence of an alternative platform of narrative/reality making in the synthetic life offered online.

What we have in our bi-polar, online and offline domains of perceiving and knowing, is a clear introduction of a fractal reality but one which enhances the power of the hyperreal and thus confounds toward chaos what overspills the fraudulence of a market order supremacy as well as its operative, hyperreality. But, once again, as the fractal nature of the underlying territory cannot be subsumed within either than supremacy or hyperreality, a fractal politics performed on behalf of the unmapped territory of mind as well as culture has an insuppressible agency.

The fractal state of the American mass psyche is chaotic and confused as it is structured within both the hyperreal and hyper-capitalism, hyped to opioid levels by the quant speed of our ferocious financial mathematics. All previous metanarratives establishing an order of things from within their own hierarchies kept at bay the chaos inflicted by our millennial hyperreality and hyper-capitalism. Both the social order and the order of consciousness found a functional degree of stability in faith and then reason. That changed suddenly and traumatically as the realization that ungrounded narratives spun by a self-authorizing citizenry and broadcast on digital screens destabilized both society and psyche.

The confirmation in cyberspace of narratives, mostly by solecistic and catachrestic tweets ranging from ludic to lunatic, maximizes an instability that is systemic within an order of simulacra that has replaced the real. And that disorder both serves and preserves a market order grounded in an efficiency that aggrandizes the few and fragments both mind and society.

Nevertheless, it is through a fractal order of things that the fractal territory of reality both within us and outside ourselves that bogus orders can be indicted and disempowered, that what is fragmented is only so because of a false mapping of that fractal territory.

And here hyperreality is itself fissured by a carnivalesque polyphony of voices, each representing a very personalized relationship with reality, from the lunatic narratives of QAnon to the lunatic tweets of the President of the United States. They are of course lunatic from one perspective, not their own, from one disconnected gap in our mass psyche and because of this we can neither demolish them nor establish connections.

Joe Biden’s expectation is that we, in Trump’s America, have been driven so out of line, so far from a common mapping we all have of what America is, that all that need be done is stand for a return to a former coherence, continuity, and unity. It’s a linear hope, not a fractal one. There are deep potholes in this that one can study when one returns to any of Bernie Sanders’ or Elizabeth Warren’s deconstruction of this former unity as well as to Stan Cox’s The Green New Deal and Beyond.

What we have now and had before Trump is a kind of master plan overlaid on the whole culture — our hyper-capitalist economic system and the hyped order of its Efficient Market Hypothesis — which promise to raise all boats but instead maintains a fractured and not fractal order. Yachts sail here; everyone else is at some stage of drowning. Security gates keep out one mass of humans from crossing into the domains of the few. Rather than create a unifying order of things that exhibits justice on micro and macro levels, an order of things supported to various degrees by our Republocrat politics has produced only pathological effects, from the stimuli overload of cyberspace to paranoiac conspiracy fantasies to crazed devotions, religious and political.

There is a fractal differing greatly from the Market Hyperreal, but it is smothered within a politics of both parties which bends the knee to this travesty of fractal reality, rather like the way Mitch McConnell and pack bend the knee to an Emperor without Clothes.

The coastline of the American mass psyche is pathologically fractured because this imposed, destructive order of Market Hyperreal bankrolls those fractures. It bankrolls all the irregularities of wealth, equity, and justice, all the gaps in interpretation and understanding, all the escapes from the Great Outdoors (reality outside ourselves) to illusionary personal autonomy, all the escapes from the imperatives of reliable word and world connections, from a history dismissed by the urgencies of profit making now, and finally and most lethal, our moral obligations to the biodiverse ecology of this planet.

The context of a porous, fissured mass psyche sustained by an economic metanarrative, an overriding master voice, paradoxically requires such disorder and is threatened by it. Disorder is required in its populace confounding capacity, but it is also threatened by explicit challenges, such as Bernie Sanders has made in two presidential elections. His is not the deepest, most cogent challenge but it is the one that has reached wide audience headlines. And he is certainly an advance from the duplicities of Clinton’s Third Way and Obama’s failure to connect with long standing Leftist critique but rather with some naïve attempts to negotiate with the Market Hyperreal.

Regardless, however, of neoliberalism’s need to sow disorder, what will disorder its autocratic presumption lies within the fractal territory of the U.S. Any incursion of the autocratic into the fractal coastline of not only the American mass psyche but into an entrenched cultural/political/social fractionalism/factionalism is not sustainable. Simply put, it’s damn difficult to establish a totalitarian takeover or a systemic invasion into what is more random than deterministic more chaotic than predictable.

This refers to American culture as well as the American mass psyche. You need only visit social media to realize that there is no fascist silencing of our cultural cacophony, although such a visit also confirms the success of our market autocracy’s mission to confound the American voter.

The disarray of both mass psyche and American culture, of what is outside mirroring what is inside, can neither respond in any totalizing way nor create in any totalizing way any manner of takeover, including viral videos of pet donkeys in the living room. As it is with Trump’s America, viral videos have our attention, their moment, and then vanish in a swirl of the hyperreal that has become America (pace Canada, Central and South America). They are quite useful for any invading metanarrative if minds must be confused for such invasion to overwhelm self-interest. Surely, it is not in the self-interest of 80% of the population to adulate a billionaire who confounds a Constitutional direction to “insure domestic Tranquility” and “promote the General Welfare.”

Our own exchange of the hyperreal for the real, of any sense of egalitarianism for profit to shareholders, and of ways of knowing leading to common understanding for personal opinionating has brought our Frankenstein to life.