Reports are emerging of a serious diplomatic incident in Suva 10 days ago in which two Chinese diplomats from the Suva embassy assaulted a member of the Taiwanese delegation in Fiji.

The incident allegedly took place on the evening of Thursday, October 8, on the fringes of a reception at the Grand Pacific Hotel hosted by the Taipei Trade Office to celebrate Taiwan’s National Day. There was no mention of the incident in the publicity about the event released by the Taiwanese, that included a speech by Taiwan’s representative in Fiji, Jessica Lee, emphasising cooperation in such fields as agriculture and medicine and praising Fiji’s climate leadership.

Yet the event was evidently marred by an astonishing physical altercation between mainland diplomats and a Taiwanese official.

Grubsheet understands that two members of the Chinese Embassy gatecrashed the function and began taking photographs of the proceedings and of those attending the function, which according to the Taiwanese included members of the diplomatic corps, international organisations, NGOs and Fiji’s Chinese community.

According to well placed sources, they were asked to leave by a male member of the Taiwanese delegation but refused to do so.

Later the two Chinese embassy officials allegedly assaulted the delegation member, “beating him up so badly ” – according to these accounts – that he required hospital treatment in Suva. The reports say police were called to the GPH but refused to take the matter further when the Chinese officials claimed diplomatic immunity. 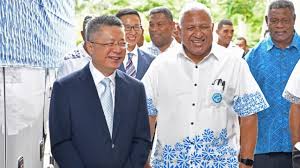 The entire incident is said to have been “hushed up” but there is still a diplomatic standoff because Taiwan has lodged an official protest with the Fijian Ministry of Foreign Affairs.

No other details are available for the moment. But it is clearly unacceptable for Chinese diplomats to assault other foreign representatives on Fijian soil.

The two may be claiming diplomatic immunity but it does not give them the freedom to break Fijian law in such a flagrant and outrageous manner.

It is open to Fiji to declare the two Chinese diplomats persona non grata – the diplomatic term for an unacceptable or unwelcome individual – and require their removal from the country. But this is going to be a big test for the FijiFirst government’s resolve because of its close ties with Beijing and it is not a good sign that 10 days have passed so far without public comment. Only six days before the GPH incident, on October 2, the Chinese ambassador in Suva, Qian Bo, hosted Fiji’s “big three” – President Jioji Konrote, Prime Minister Voreqe Bainimarama and the Speaker of the Parliament, Ratu Epeli Nailatikau – at a function at the Chinese residence to celebrate the founding of the People’s Republic.

Relations between the Fijian government and Beijing are extremely close. Last year, Fiji bowed to pressure from China to force Taiwan to rename its office in Suva from the “Trade Mission of the Republic of China” to the “Taipei Trade Office”.

Taiwan protested against the decision to no avail. 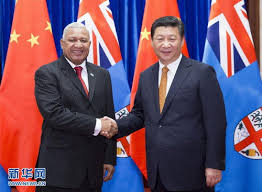 The GPH incident is evidently part of a global pattern of aggressive behaviour by the mainland to assert its claim to Taiwan, which includes President Xi Jinping threatening to invade the island by the end of the decade.

Fiji is not the only country in which Chinese diplomats have been behaving badly.

Yet however small we are and whatever the level of Chinese aid, we cannot and must not tolerate unlawful behaviour on Fijian soil and the two offenders should be declared persona non grata as soon as possible and be and be withdrawn from Fiji.

In her speech at the October 8 function, Jessica Lee alluded to Chinese aggression not just towards Taiwan but towards pro-democracy supporters in Hong Kong.

“2020 is a year of unimaginable challenges, but it is also a year showing Taiwan people’s fortitude and resilience in pursuing democracy, freedom and prosperity. We have completed the 15th presidential election and joined other members of the international community to uphold the rights and interests of the people of Hong Kong,” she said.

Grubsheet Feejee is the blogsite of Graham Davis, an award-winning journalist turned communications consultant who was the Fiji government’s principal communications adviser for six years from 2012 to 2018 and continued to work on Fiji’s global climate and oceans campaign up until the end of the decade. Other articles here.