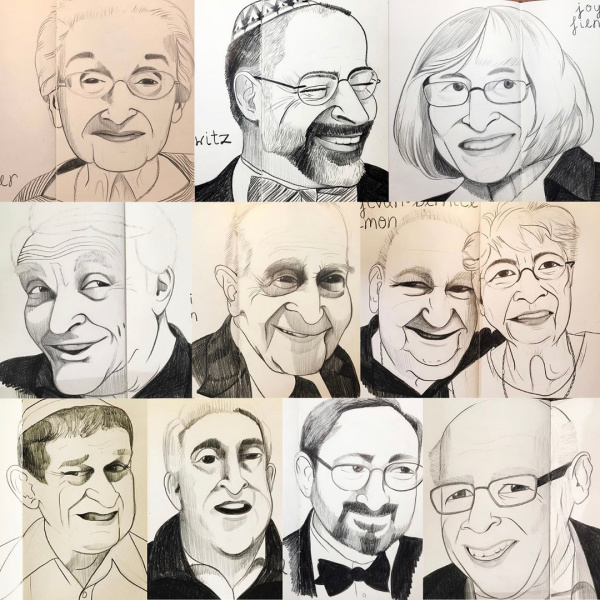 This week marks two years since the deadliest act of anti-Semitism in U.S. history, when a right-wing madman shot and killed 11 mostly older Jews worshipping in a Shabbat morning service at the Tree of Life, or L’Simcha, synagogue in Pittsburgh’s Squirrel Hill. On that Oct. 27, news of a shooting quickly spread through the close community, where at several synagogues congregants were reading the Torah’s story of God asking Abraham to sacrifice his son Isaac. “It was a shattering moment – you can’t put context to such a moment,” recalled one rabbi simultaneously trying to think clearly, secure the building and calm people, many of them baby boomers for whom the dark stories of their parents’ past had suddenly became the unimaginable present. The attack lasted 83 minutes. In the end, there were 11 victims from three congregations that used the Tree of Life synagogue space. They were Joyce Fienberg, Richard Gottfried, Rose Mallinger, Jerry Rabinowitz, Cecil and David Rosenthal, Bernice and Sylvan Simon, Daniel Stein, Melvin Wax and Irving Younger. The next Sabbath, the front page of the Pittsburgh Post-Gazette, the area’s largest newspaper, bore the first Hebrew words of the Kaddish, the Jewish mourners’ prayer: “May His great name be exalted and sanctified.” Explained the paper’s editor, who lives three blocks from the synagogue, “When you conclude there are no words to express a community’s feelings, then maybe you are thinking in the wrong language.” Given history and the hateful times – Charlottesville was a year before – many said they were shocked but sorrowfully unsurprised by the attack; many had the sense “it could have been any synagogue.”

Two years later, the massacre deeply resonates in a community struggling to heal, understand, move forward. People have undertaken the Jewish rituals of mourning – sitting shiva, unveiling gravestones, marking yahrzeit by reciting the names of the dead. They have embraced the social justice tasks of Tikkun olam – repairing the world – heeding the Jewish call to “be the light when the world feels dark.” This week saw virtual prayers and tributes; those who came in person often wore buttons and yarmulkes with the logo, “Stronger Than Hate.” Always, there is the mandate to “make their memory be a blessing”; notes Yad Vashem, “It is a moral imperative to remember each victim as a human being, with a name and (a) story.” Thus did 91-year-old Dr. Joe Charny, a retired psychologist who escaped that day but saw 11 friends die, take to reciting their names in daily prayers, sitting in the same spot – fourth row, first seat on right – as he did for decades at the Tree of Life. “You have to remember,” he said. “Their lives meant something.” To mark that truth, an oral history project is underway, and a book, “Bound in the Bond of Life: Pittsburgh Writers Reflect on the Tree of Life Tragedy,” was just published. One of its essays is by Eric Lidji, director of the Rauh Jewish Archives. He has spent the last two years documenting those 83 minutes, collecting boxes of flyers, speeches, condolence letters and gigabytes of digital material, all constituting “a collective emotional response to one tragedy,” a persistent remembering. Overcome by “the murkiness of my grief,” he describes an epiphany: “Someone is always feeling what I just felt. Grief is always striking somewhere,” a sort of “class of demon.” He quotes John Updike, akin to the Old Testament injunction to give praise: “Any act of description is, to some extent, an act of praise.” The work “remains perpetually ongoing.” And, per Joe Charny, it’s “the right thing to do.”

“I have no special insight into why this attack happened, or why it happened here. I don’t know what would have prevented it from happening here or what would prevent it from happening again somewhere else. I don’t understand the depth of my sorrow or the vast sorrow of others. All I know is this: there are 189 boxes of things stacked neatly on our shelves, plus 18.45 gigabytes of digital materials and another 146.9 gigabytes of online materials stored on servers and hard drives. In due time, with persistence, I can know just the tiniest bit more. I can know each thing individually. I will be able to describe it, and I will be able to situate it among all the other things in the archive, so that nothing is ever lost or overlooked, so that others can someday make meaning from it all.” – Eric Lidji.