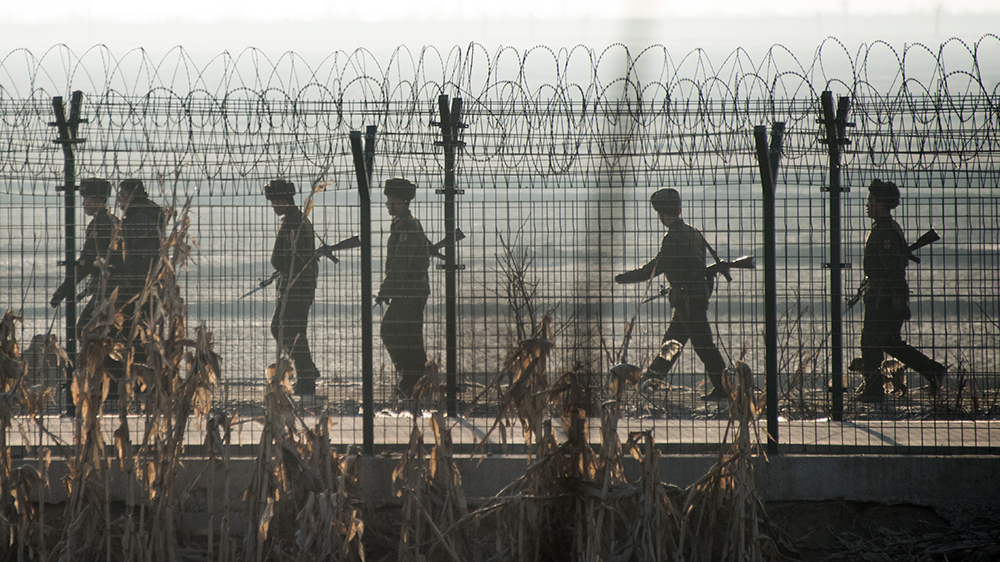 Dozens of North Korean soldiers were injured in two separate incidents while they were laying landmines near the Sino-Korean border to block citizens from fleeing to China to escape grim economic conditions made worse by coronavirus controls, sources in the country told RFA.

Pyongyang has rolled out a series of aggressive measures since summer to block access to the 880-mile-long border, a conduit for trade, smuggling, and North Koreans seeking work in China or escape onward to South Korea. The border has been closed since January under COVID-19 prevention measures, compounding the hardships for residents of Asia’s poorest country.

After beefing up the frontier guard corps with special forces, North Korea in August ordered border guards to shoot anyone within a kilometer (0.6 miles) of the border regardless of their reason for being there, among other tough steps to prevent citizens’ contact with foreigners during the pandemic.

In a move that shocked residents in China border regions that had never been mined, and was seen as a sign that the earlier measures haven’t stopped desperate escapees, troops have begun laying landmines this month in at least two provinces along the border, sources in those areas told RFA’s Korean Service.

“They’ve been setting up landmines in the North Korea-China border area of Ryanggang province since early this month, in accordance with the supreme command’s orders,” a military source from the central northern province told RFA Tuesday.

“It’s been less than 15 days since they started deploying the mines, but one exploded while some soldiers were burying it, and about a dozen soldiers were injured, some in their eyes, legs or back,” said the source, who requested anonymity for security reasons.

The military source said the 25thborder guard brigade soldiers and Special Forces soldiers were burying “latest type” mines with a kill radius of 3 to 3.5 meters (10-11.5 feet) 60 meters (65 yards) from the border, especially in areas where border security is weak.

The source said it is well known that North Korea’s army buries landmines north of the demilitarized zone and battlefield truce line that separates North Korea from the South, but seeing them deployed on the border with China comes as a surprise.

“We’re one of the provinces located farthest from the armistice line, so residents of the border area are on high alert,” said the source.

The source declined to disclose the specific area where the accident occurred or the exact unit the soldiers belonged to, to protect his identity.

In a separate incident recounted to RFA by a resident of neighboring North Hamgyong province, several border guards were injured in a blast while laying mines there as well.

“In the middle of this month, several soldiers from the 27thbrigade of the border guards were reportedly injured in an explosion while they were trying to bury landmines. The explosion was due to the fact that the military authorities did not provide sufficient training to the soldiers who were laying the mines, simply telling them to begin work immediately,” the second source said Tuesday.

“What is so urgent about deploying landmines at the North Korea-China border to the point that multiple explosion accidents have occurred due to a lack of training?” the second source said.

The second source said that the soldiers assigned to mine duty after the explosions are very nervous and uneasy about continuing the work.

“This is the first time in the history of the Democratic People’s Republic of Korea that landmines are being placed at the border with China instead of in the front-line area where we must confront our enemies,” said the North Hamgyong resident.

“This can only be interpreted as an attempt to completely seal the border and prevent residents from fleeing,” the source added.

Trade with China, both official commerce and smuggling, had been a pillar of North Korea’s economy prior to the coronavirus, but Beijing and Pyongyang shut the border down in January and suspended all trade, effectively leaving North Korea economically isolated.

Local economies along the rugged 880-mile border that depended on the trade or transport of goods either legitimately acquired or smuggled in from China began to decline, with ships rusting in harbors, empty markets and a return to food shortages in a country where chronic malnutrition persists 25 years after a deadly famine.

“Residents with livelihoods threatened by sanctions and the coronavirus have not stopped trying to escape from North Korea even though authorities have doubled or tripled measures to block access to the border, including by killing would-be border crossers,” the North Hamgyong source said.