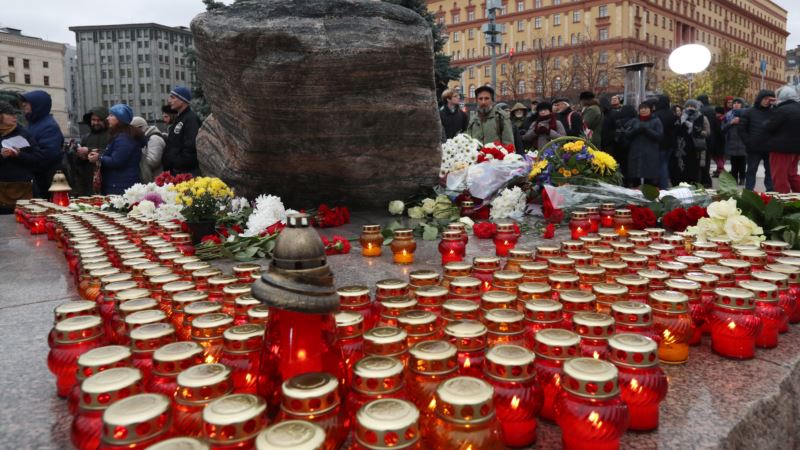 MOSCOW — An annual ceremony to commemorate thousands of people executed during communist dictator Josef Stalin’s Great Terror has been held in Moscow and some other Russian cities online due to the coronavirus pandemic.

Russian Ombudswoman Tatyana Moskalkova launched the 12-hour ceremony, known as Returning the Names, on YouTube on the morning of October 29.

The Moscow-based Memorial Human Rights Center has held the ceremony every year since 2006 at the Solovki Stone memorial on Moscow’s Lubyanka Square, which is the site of the former headquarters of the Soviet KGB and current headquarters of the successor Federal Security Service (FSB).

Participants — relatives of the dead, rights activists, and others — read aloud the names, ages, occupations, and dates of executions of some of the estimated 1 million or more Soviet citizens executed by Stalin’s regime in 1937-38.

The ceremony, which is held each year ahead of the October 30 Day of Commemoration of the Victims of Political Repressions in Russia, was barred in several Russian cities this year due to coronavirus restrictions.

In the city of Perm, the ceremony is being held online as well.

In Tver, city authorities allowed people younger than 65 to held the ceremony in the city center. It was recommended that others participate by lighting candles in their windows.

October 30 was chosen as the date for the Day of Commemoration of the Victims of Political Repressions to honor gulag inmates in the Russian regions of Mordovia and Perm who started a mass hunger strike on that day in 1974, protesting political persecutions in the Soviet Union.