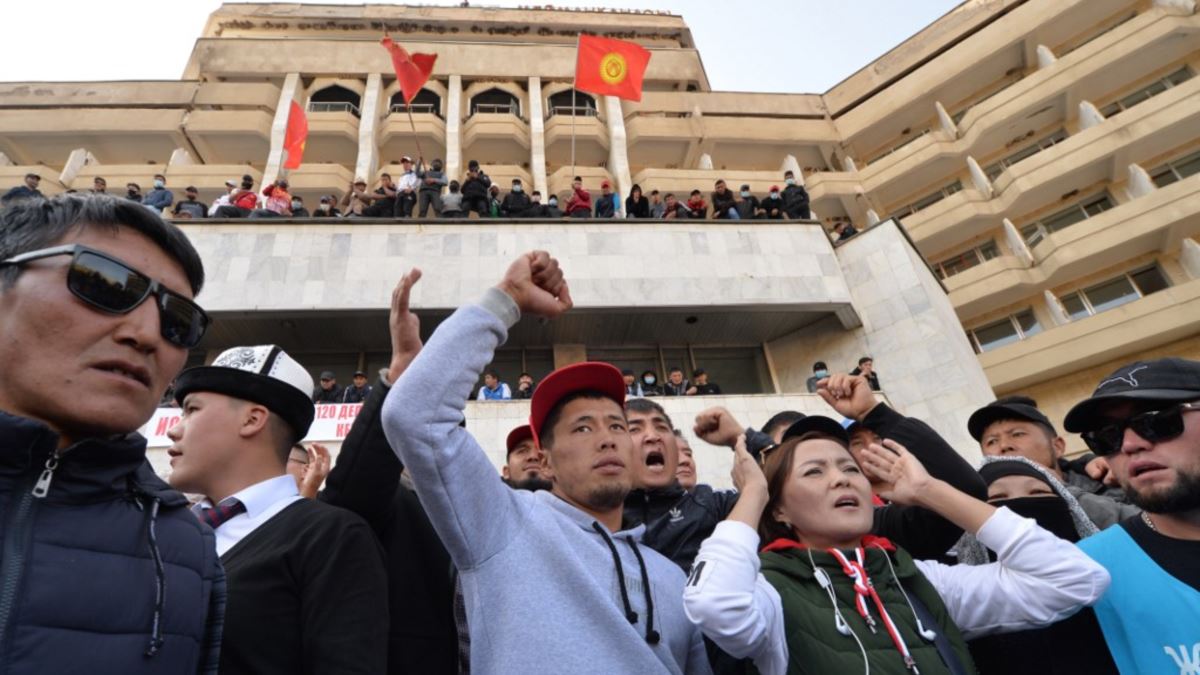 For the third time in a bit more than 15 years, large protests in Kyrgyzstan have forced a president from power.

But these latest demonstrations that started the day after the October 4 parliamentary elections have led to a rare situation in which a change of power in post-Soviet Central Asia is not providing optimism for the future.

That might sound like an overly broad statement, but consider the changes of power in Central Asia since Kyrgyzstan’s People’s Revolution in March 2005 that chased President Askar Akaev from office. Excluding Tajikistan’s first 15 months of independence in the early 1990s, the ousting of Akaev was the first leadership change in the region since the dissolution of the Soviet Union.

Turkmen President Saparmurat Niyazov, who preferred to be called Turkmenbashi (“the head of the Turkmen”), died in late December 2006. He had been the country’s president since independence in 1991 and for some six years before that the Soviet leader of the republic of Turkmenia.

Whatever qualities he may have possessed that led the Kremlin to select him to head Turkmenia, after he was left to his own devices following independence it was difficult to see them.

Niyazov oversaw the creation of a bizarre government with the person of the president playing a central part in every aspect of life in the country. Turkmenistan became the most repressive state among the former Soviet republics.

Upon his death, the country’s little-known health minister, Gurbanguly Berdymukhammedov, came to power.

At the time, the means of Berdymukhammedov’s ascendance to the presidency did not make much difference to the people of Turkmenistan. Most were simply glad to see the end of Niyazov’s rule.

Berdymukhammedov talked about reforms, and in February 2007 ran in a presidential election — only Turkmenistan’s second since independence — and unlike the October 1992 election, when Niyazov ran unopposed, Berdymukhammedov faced two challengers.

The international community was cautiously encouraged.

The younger and seemingly more coherent Berdymukhammedov made official visits to the East and the West and was even invited to the NATO summit in Bucharest in 2008.

Berdymukhammedov eventually dashed any hopes of democratic change and has quite possibly become an even worse leader than his predecessor.

Uzbek President Islam Karimov died in the late summer of 2016, but not before spending 25 years presiding over a dictatorship that left the people of Uzbekistan without basic freedoms and no means to seek change.

His replacement was his prime minister of 13 years, Shavkat Mirziyoev, which inspired little optimism that the country’s future would be much different than its recent past.

But Mirziyoev quickly spoke about implementing reforms, several older political prisoners were freed, the government began a campaign to eradicate forced labor in the cotton fields, and Uzbekistan opened itself up to tourists.

Uzbekistan had a new feel to it and people gained hope that things would change for the better.

The international community noticed these changes and — before the coronavirus pandemic broke out — trade and investment in Uzbekistan reached new heights. Many still hold hope that Mirziyoev can bring more improvements to Uzbek society.

Kazakhstan’s longtime leader, Nursultan Nazarbaev, stepped down as president in March 2019 and essentially handed the post to Qasym-Zhomart Toqaev, a loyal technocrat.

Many believe Nazarbaev is still in charge, and the manner in which power was transferred troubled many. Renaming the capital after Nazarbaev also did not help Toqaev’s image.

But Nazarbaev’s official departure awoke some sections of society, particularly among the country’s youth, that were waiting for a change in power and wanted that to translate into change for their own lives.

There have been many protests in Kazakhstan since March 2019, sometimes only involving a single person, and the authorities have forcibly broken up almost all of them.

But there is a new energy in civic activism in Kazakhstan that has not been seen for many years and shows no signs of dissipating any time soon.

When Akaev was ousted in Kyrgyzstan in March 2005, there was a sense that the people had rallied to rid the country of a leader who had stayed too long, had increasingly tried to gain more power, and was bringing family members into government to establish a sort of dynasty.

Unfortunately, the expectations that followed the 2005 revolution were dashed by Akaev’s successor, Kurmanbek Bakiev, who fell into a familiar pattern but proved more avaricious than Akaev. Bakiev was chased from power in 2010.

Once again, hopes were raised. The constitution was rewritten to move Kyrgyzstan toward a parliamentary form of government, the presidential term was limited to one six-year stint in office (which was honored by President Almazbek Atambaev), and both the 2010 and 2015 parliamentary elections were marked by improvements over previous elections and given a seal of approval by Western observers.

The response to the tainted October 4 parliamentary elections seemed to be a victory for the Kyrgyz people.

Once again, the people had risen up when the authorities had gone too far and another president was about to be forced from office.

But the appearance of Sadyr Japarov — a former nationalist politician freshly sprung from prison who was somehow nominated and approved as prime minister — quickly muted any celebrations.

There does not seem to be any sense of victory or cause for celebration in Kyrgyzstan yet, except for the supporters of the populist Japarov.

The rules are being changed and there are plans to change some laws — even the constitution — but all the modifications seem designed to suit one person — Japarov.

There are suspicions that organized-crime groups are supporting Japarov, which could help explain his rapid rise from prison to prime minister and simultaneously acting president in less than three weeks.

The so-called supporters of Japarov who have regularly gathered outside the government building more closely resemble soccer hooligans than political activists.

Some parliament members and opposition parties say they have received threats and believe the source of those threats is Japarov’s supporters.

Foreign Friends Not On Board

The Kremlin has shown it is not keen on the change of leadership in Kyrgyzstan.

Russian President Vladimir Putin described the change of power in Bishkek as a tragedy and Moscow has suspended $100 million in financial aid to Kyrgyzstan.

The United States released a statement saying Kyrgyz “citizens and their leaders must continue to fight against the influence of organized crime and corruption in politics.”

After two unsuccessful attempts to name Japarov prime minister, both of which were hastily arranged and failed to gather a quorum, the European Union issued a statement that noted “the concerns raised by Kyrgyz citizens and the international community about possible procedural flaws during the designation of the new prime minister.”

The protests against the October 4 parliamentary elections that led to the results being annulled and repeat elections being called should have been a major triumph for the country.

But the subsequent events with Japarov in full power doused any feelings of euphoria over this victory and in its place is a sense of foreboding and unfinished business.