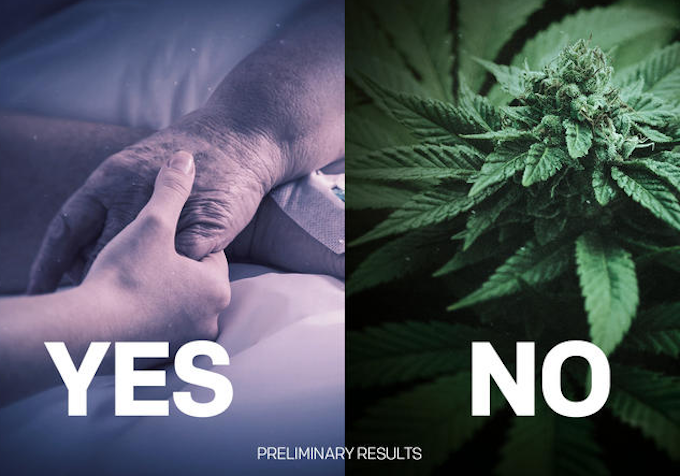 The euthanasia referendum has passed New Zealand’s public vote, with 65.2 percent voting in favour, but the cannabis question has 53.1 percent voting “no” so far, preliminary results show.

The number of voters who chose “no” in the End of Life Choice referendum reached 33.8 percent.

But with almost half a million votes still to be counted, New Zealand will need to wait until next Friday for full and final results.

In a statement, Justice Minister Andrew Little said assisted dying remains illegal in New Zealand until 6 November 2021, and the Cannabis Legalisation and Control Bill will not be introduced as legislation by the Labour government this term.

The End of Life Choice – or euthanasia – referendum was based on a member’s bill put forward by ACT leader David Seymour, with the aim of legalising a form of safe euthanasia for some people experiencing a terminal illness.

The bill had already passed through Parliament, on the proviso that the referendum held at the election supports it.

The recreational cannabis referendum is a different story. The government released a draft bill for a law it would seek to pass depending on the result, but the Cannabis Legalisation and Control Bill has not yet been through Parliament so would be subject to change before it was made law.

Labour has also suggested – despite earlier promises the referendum result would be binding – that Parliament’s final vote on the bill would be a conscience vote, meaning MPs would not be required to vote along party lines.

Campaigners for cannabis legalisation were hoping the widespread support for leftist parties – Labour and the Greens – at the election will point to support.

Final results for the referendums and the election are due when the special votes are counted on November 6.

Special votes include post-in and overseas votes, and votes made by people who enrolled after 13 September. It also includes prisoners who are on remand and – for the first time in a decade – prisoners who have been sentenced to less than three years.