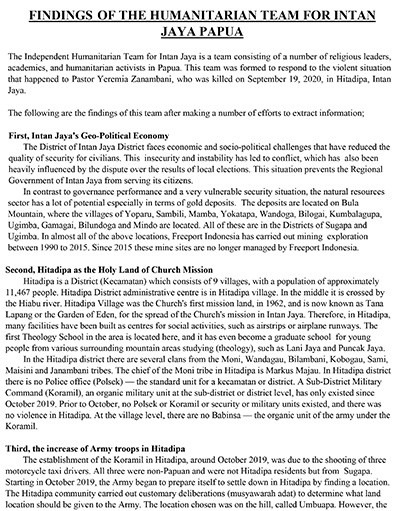 The Papua Province Humanitarian Team for Cases of Violence Against Religious Figures in Intan Jaya Regency, Haris Azhar, has announced the results of their investigation into the shooting of Pastor Yeremia Zanambani who was allegedly shot by a rogue Indonesian military (TNI) officer in Hitadipa District, Intan Jaya, on September 19, reports CNN Indonesia.

Azhar said that the shooting of Pastor Zanambani began with an incident which occurred on September 17. At the time, an exchange of fire had occurred between TNI personnel and a group from the Free Papua Organisation (OPM) in the Sugapa Lama area.

During the incident, one TNI officer was killed and a TNI assault rifle was seized by the OPM.

Following the incident, the TNI summoned several members of the Hitadipa community one by one. During the meetings, the TNI said they wanted the firearms taken by the OPM to be returned.

“This message was accompanied with the threat that if they’re not returned the Hitadipa district would be bombed. This continued through to the next day, September 18,” Azhar said during a virtual press conference this week on Thursday.

Azhar said that the TNI again gathered community members together on the grounds in front of the sub-district military command (Koramil) on September 19. The Koramil commander gave the community two days to return the firearms.

Later on the same day, about 12 noon, the community was again gathered in front of the Immanuel 1 Church by a TNI officer called Alpius.

Military list of named ‘enemies’
Alpius was said to have already recorded and compiled information on six members of the Hitadipa community who were deemed to be “enemies” and the TNI and the Indonesian police regarded it “appropriate to wage war” on them.

One of the six people named had been Pastor Yeremia Zanambani.

“As a consequence of this statement the housewives and men, including the pastors and shepherds broke down in tears before Alpius,” Azhar said.

Azhar said that a member of Zanambani’s family, Meriam Zoani, held a meeting with the group of TNI soldiers led by Alpius at the end of the Hitadipa landing field at around 2.55 pm. A large number of TNI soldiers had gathered there.

Zoani was shocked and frightened at seeing how large the group of TNI soldiers were and that they were led by Alpius.

Azhar explained that Alpius was a TNI soldier assigned to Hitadipa district who Zanambani had treated as his own son. Alpius often visited Zanambani’s home to shower, eat with the family and to collect water for a garden Alpius tended.

Soldiers headed to pigpens
According to Azhar, furnished with information that Zanambani was at his pigpen, at 3.50 pm Alpius, along with three other TNI members, headed off to where Zanambani kept his pigs.

Two TNI members remained at a distance of about 25 metres from the Intan Jaya regency main road while two others, including Alpius, headed towards the pigpens.

“Straight away an order of ‘hands up’ [was heard] to which Zanambani with raised hands responded to by saying ‘I am a servant of God’”, said Azhar.

Azhar said that despite this the two TNI soldiers fired two shots in Zanambani’s direction. One shot hit his left arm and the other hit the pigpen wall. Zanambani immediate fell to the ground.

As well as being shot, Zanambani was also allegedly stabbed in the back with a sharp weapon.

Concerned about Zanambani’s whereabouts after he failed to return home, at around 6 pm, Zoani plucked up the courage to go to the pigpen to try to find him.

Upon arriving at the pigpen, Zoani was shocked to find Zanambani sprawled on the ground and covered in blood. Despite this Zanambani was still able to speak.

‘What happened?’
“‘I asked him why? What happened?’. The pastor answered ‘it was the person we gave food to who shot and stabbed [me]’”, said Azhar quoting from the conversation between Zoani and Zanambani.

Azhar said Zanambani had suffered a serious gunshot wound to his left arm which resulted in heavy bleeding. In addition to this, Zanambani was also stabbed in the back of his neck by a military blade. The injury also resulted in significant bleeding.

Azhar said Zanambani was shot by a standard military weapon and it was suspected that he had been shot from a distance of approximately 1 metre. This was because the object that struck his body was a bullet which hit his upper arm.

“A 7-10 cm straight vertical slice was visible on the skin,” Azhar said.

Azhar said that the gunshot was more than just a flesh wound, adding that Zanambani’s armed was almost shot off. But, said Azhar, there were no witnesses or statements from those who initially picked up the victim or who had accompanied him following the attack.

“A bullet was found, a wound was also found on the upper rear part of the victim’s body, suspected to be a result of a sharp weapon. Resulting in an injury which caused serious blood loss,” said Azhar.

Military reluctance to respond
When confirmation was sought by CNN Indonesia from the military, TNI information centre head Major-General Achmad Riad was reluctant to respond to the investigation’s findings. Riad asked that the issue be referred to the Ministry for Security, Politics and Legal Affairs (Kemenko Polhukam).

“Please confirm it with the Kemenko Polhukam in the name of the state which established the official TGPF”, said Riad, referring to the government-sanctioned Intan Jaya Fact Finding Team (TGPF) formed by Security Chief Mahfud MD in early October to investigate Zanambani’s death.

The head of the Intan Jaya TGPF field investigation team meanwhile, Benny Mamoto, stated that they have more complete findings on the incident. He was responding to the presence of the Intan Jaya independent humanitarian team led by Azhar.

“The TGPF’s findings are more complete because the information was sourced from members of Indonesian police (including investigators) and TNI members, as well as the victim’s family and religious figures, social figures,” said Mamoto in a text message sent to CNN Indonesia on Thursday.

Although the TGPF already has findings from the field, Mamoto said that they were not at liberty to cite the names of the parties involved.

He explained that that the TGPF was only tasked with gathering information or data in the field. All of this data has been handed over to the commander of the TNI, the national police chief, the army’s chief of staff, the head of the National Intelligence Agency (BIN) and the Minister for Home Affairs to be followed up on.

“It’s not possible for the TGPF to cite names because it’s not the TGPF’s prerogative,” said Mamoto.

“The ones who have the authority to determine the perpetrators or suspects are the investigators after they’ve collected two pieces of evidence [as required under Indonesia’s Criminal Code],” said Mamoto who is also Executive Director of the National Police Commission.

“Up until the last point [in the investigation] we had yet to find an eyewitness to the shooting incident so it would be inelegant to mention the perpetrator’s name,” he added.

Earlier, the Intan Jaya TGPF formed by Mahfud MD finished its investigation into Pastor Yeremia Zanambani’s killing. Mahfud said that there are suspicions of the involvement of the security forces in the killing.